Approximately one-quarter of all cancer-related deaths in the United States of America (USA) are attributable to lung cancer (1). The 1970s through the 1990s showed very little progress in terms of improvement in overall lung cancer survival. However, in the late 1990s and early 2000s, there appeared to be significant jump in lung cancer survival (2,3). This was also observed in multiple single center studies. The Moffitt Cancer Center saw a more than doubled improvement in stage specific median survival and 5-year stage specific survival from 1986 to 2008 (4). In addition, the University of Texas M.D. Anderson Cancer Center compared the time intervals of 1985–1989 with 2000–2004 and saw an increased median survival from 12 to 17.5 months and an increased probability of survival at 2 years from 26.5% to 40.8% (5).

It would be difficult to pinpoint a single cause for this improvement as it may be due to multiple reasons. Scientific progress has led to better chemotherapy, enhanced delivery of radiation, and more precise surgery. In addition, anti-tobacco education has led to significant decreases in smoking rates in the USA today. Technologic progress has improved the resolution of computer tomography (CT) and positron emission tomography (PET) scanning. But why was there a sudden improvement in lung cancer survival around the turn of the century? Interestingly on January 1, 1998, the Centers of Medicare and Medicaid Services (CMS) approved coverage for PET imaging for use of characterization of solitary pulmonary nodules and initial staging of non small cell lung cancer (NSCLC). However, it was not until July 1, 2001 that CMS covered PET imaging for diagnosis, staging, and re-staging of NSCLC (6). Accordingly, we wanted to investigate what impact, if any, the introduction of PET imaging had on lung cancer survival. In addition, we wanted to see if any other factors could be identified that might also have impacted survival. We present the following article in accordance with the STROBE reporting checklist (available at https://vats.amegroups.com/article/view/10.21037/vats-22-25/rc).

The current study included all patients ≥18 years who had NSCLC with evidence of ipsilateral mediastinal nodal disease (N2) in the Surveillance, Epidemiology, and End Results Program (SEER) database [1988–2013]. We elected to limit our analysis to this study period to have comparable follow up period of the patients in the two groups. A flow diagram outlining the study’s selection criteria is shown in Figure 1. 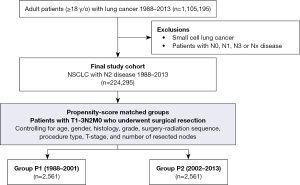 In this retrospective, cohort, study, staging of patients’ disease followed the 7th edition of the American Joint Committee on Cancer (AJCC) classification (7).

The study cohort was divided into two groups based on the date the CMS covered PET imaging {P1 [1988–2001] and P2 [2002–2013]}. Differences in demographics, tumor characteristics, treatment modalities, and survival were compared between the two groups both in the entire cohort and in the propensity-matched groups. Factors associated with cancer specific survival in patients who underwent surgical resection were also assessed.

Factors associated with lung cancer specific survival were estimated in patients who underwent surgical resection in the entire cohort using Cox-regression analysis. Univariable factors with P value <0.05 were included in the multivariable model.

The study was conducted in accordance with the Declaration of Helsinki (as revised in 2013). 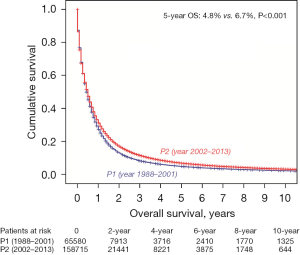 Distribution of M stage over the study period 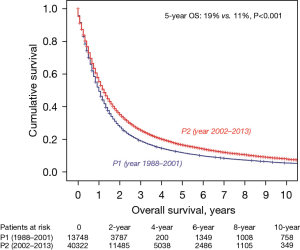 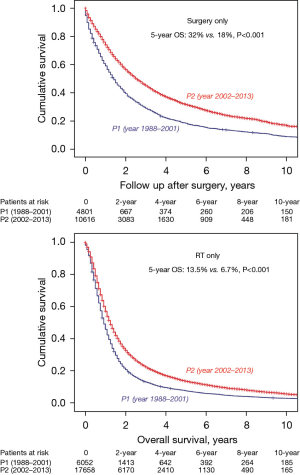 Within the surgical group, 5-year OS was also improved regardless of operation type. Patients undergoing lobectomy in P2 vs. P1 had a 5-year OS of 37% vs. 25%; pneumonectomy patients were 31% vs. 19% and sub-lobar resection (SLR) patients were 23% vs. 17%. However, when we looked at 5-year OS over the entire time period, we still found lobectomy patients to have significantly improved survival when compared to patients undergoing pneumonectomy or SLR and no difference in survival when comparing pneumonectomy and SLR patients (Figure 5). 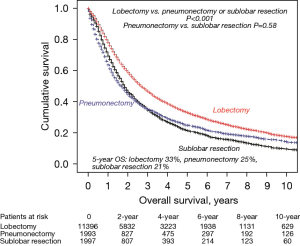 MVA of factors associated with CSS in surgically resected T0-3N2M0

The past 3 decades have seen significant changes in the diagnosis and treatment of NSCLC. While it is difficult to stratify which of these developments or discoveries have had the greatest impact, there are a few that are noteworthy. Platinum-based chemotherapy was first introduced in the early 1980s (8). Neo-adjuvant and adjuvant therapy was proven to be effective in the 1990s (9,10). Lung cancer screening in the early 2010s has allowed for the earlier detection and treatment of at-risk patients (11). And now more recently the discovery of targeted therapy and immunotherapy has shown very promising results as we point towards the future (12). However, one of the most impactful developments may have occurred in 2001 when CMS approved PET imaging in the treatment of lung cancer.

This retrospective study utilized the SEER database to purposefully examine NSCLC patients with N2 disease in the pre- and post-time periods centered on the introduction of PET imaging (P1 & P2). Patients with N2 disease were selected for this study given the higher likelihood of M1 disease when compared to patients that were N0/N1. Not surprisingly, we found a significant increase in the rate of M1 disease in the P2 group. In addition, when we focused on the subgroup of patients who were presumably stage IIIA (N2M0), we found a significant difference in 5-year OS between the groups. Even a matched analysis of surgical patients, controlling for multiple variables including age, gender, the use and timing of radiation, type of resection, tumor size, and histology showed significant increases in 5-year OS favoring the P2 group.

This study clearly points to the sudden and dramatic increased incidence of M1 disease in patients with N2 disease from P1 to P2. While it is possible that there has been an increase in M1 disease over time, it seems more plausible that the true incidence of N2M1 disease did not increase. Rather, the ability to correctly diagnose it did. Accordingly, patients in P1 had a worsened survival compared to patients in P2 because many were likely under-staged and had occult M1 disease.

PET imaging has an established superiority over CT imaging for staging in NSCLC with improved sensitivity, specificity, positive predictive values, and negative predictive values. The first reported prospective evaluation of PET imaging for mediastinal staging of NSCLC was published in 1994 by Wahl and colleagues where they compared PET and CT imaging and found PET to have superior sensitivity (82% vs. 64%), specificity (81% vs. 44%) and accuracy (81% vs. 52%) (13). Scott and colleagues in 1996 further demonstrated that PET in combination with CT was superior to CT alone with sensitivity and specificity for PET approaching 100% for mediastinal staging (14). Extra-thoracic disease was detected by PET imaging in the adrenal gland and bone and subsequently PET was evaluated as a whole-body examination for lung cancer staging (15). Saunders et al. reported in 1999 that in patients under consideration for surgical resection PET imaging not only detected distant metastatic disease in 16.5% of these patients but it also changed the overall management in 37% of these patients (16). Accordingly, PET was approved by CMS in 2001 and has become the gold-standard in non-invasive imaging for staging in NSCLC. Undoubtedly, the value of PET scanning has been established in NSCLC. While there have been many studies that have demonstrated the value of PET imaging, the direct impact that PET imaging has made in NSCLC has been more difficult to fully measure. However, this study demonstrates the potential impact that PET scanning has made in lung cancer survival over the past decades. Our data clearly suggests a correlation between the time of PET approval and an increased detection of M1 disease in patients with N2 NSCLC. Accordingly, it is possible that the improved survival seen in patients with NSCLC over the past 3 decades may simply be the end product of being able to more accurately stage patients and thus allow for decreased stage migration and improved stage specific survival. One can even extrapolate that PET imaging’s greatest impact is seen in allowing for more accurate staging and appropriate treatment across all stages of NSCLC.

We also recognize that the introduction of PET may not be the only factor that has contributed to the perceived improved survival of patients over time. Our comparison of the entire cohort of patients with N2M0/1 disease over P1 and P2 showed an improved survival favoring the P2 group. This clearly points to other potential factors affecting survival. Advances in systemic therapy and RT techniques have likely positively impacted lung cancer survival. The data from this study also points to some potential surgical factors. For example, in patients with stage 3A disease we observed a 15% reduction in the use of surgery from P1 to P2. In addition, patients having surgery had a 47% reduction in pneumonectomy in P2 compared to P1 and an 11% increase in use of lobectomy over the same time period. This data likely reflects changes in practice patterns that may reflect data from the INT-139 study in 2009 which showed significantly increased mortality in patients undergoing pneumonectomy after induction therapy for stage 3A NSCLC (17). Our data from this study also supports the assertion that patients having lobectomy as part of their treatment in stage IIIA NSCLC have a survival advantage when compared to patients having either pneumonectomy or SLR.

A recent study published by Lou et al. in 2018 using the National Cancer Database (NCDB) also showed significant improved survival in NSCLC when comparing patients from 2004–2009 vs. 2010–2013 (18). They also found that patients treated at academic centers had significantly improved OS across all stages compared to patients treated in community hospitals. Interestingly this improvement was also predominantly seen in the earlier stages of NSCLC. They concluded that the improvements in survival were likely due to earlier detection, advancements in surgical and radiation techniques, development of targeted therapies, and use of adjuvant therapy. They also concluded that patients in academic teaching hospitals did better as a result of better surgical outcomes, better adherence to National Comprehensive Cancer Network (NCCN) guidelines, and improved access to clinical trials. While all of these conclusions are valid, it is also possible that patients treated at academic centers were more likely to have been appropriately staged with PET imaging which led to more appropriate treatment and improved stage specific survival.

The limitations of this study start with the retrospective nature of the analysis. More importantly, however, is the lack of specific information within the SEER database as to what exact percentage of patients had PET imaging before and after 2001. Our assumption is that with the approval of PET imaging by CMS there would be significantly increased utilization of PET imaging. To our knowledge, there isn’t another database that includes this information, and it would be impractical to perform a randomized study. Another limitation is that the SEER database used did not have information on chemotherapy or other systemic therapy usage. We presume that chemotherapy was given to this cohort of patients with locally advanced and metastatic NSCLC and that improvements in therapy had a positive impact on survival as stated previously.

In conclusion, many factors have and will continue to impact and influence the survival of patients with NSCLC. PET imaging clearly does not directly affect survival. However, major improvements in survival around the year 2000 were most likely due to stage migration secondary to more accurate staging as a result of PET approval by CMS. The importance and impact of correctly staging patients with lung cancer cannot be overstated.

Reporting Checklist: The authors have completed the STROBE reporting checklist. Available at https://vats.amegroups.com/article/view/10.21037/vats-22-25/rc

Ethical Statement: The authors are accountable for all aspects of the work in ensuring that questions related to the accuracy or integrity of any part of the work are appropriately investigated and resolved. The study was conducted in accordance with the Declaration of Helsinki (as revised in 2013).