The introduction of minimally invasive surgical techniques is leading to the increased use of surgical procedures under locoregional anesthesia (1-3).

In the context of frail elderly patients suspected of pulmonary interstitial disease or other kinds of pulmonary affections requiring a histological diagnosis, a lot of holdbacks could contraindicate surgery (4).

Even if obesity could be challenging in thoracic surgery, there are already several studies that showed that video-assisted thoracic surgery (VATS) could be safely and effectively conducted in morbidly obese patients (5). Many authors consider obesity not only a risk factor but also a relative contraindication to surgery. Nevertheless, non-intubated thoracic surgery (NITS) has shown more benefit in several different procedures in patients affected by interstitial lung disease, and obesity would not seem to affect the morbidity compared to normal-weight and overweight patients (6). Still, more evidence is needed to draw definitive conclusions.

Performing the surgical procedure under locoregional anesthesia could represent a valuable option that outweighs the benefits over the risks of surgery for elderly and obese patients. These techniques appear to be feasible and safe, with improved postoperative outcomes, including better pain scores, lower morbidity rates, and shorter hospital lengths of stay (7).

We present the case of an elderly, obese patient with multiple cardiological comorbidities with suspected pulmonary interstitial disease and concomitant pulmonary nodule candidate to lung biopsy in awake thoracic surgery.

Historically, surgical lung biopsy in suspected interstitial lung disease was afflicted by a not minimal risk of postoperative morbidity and mortality for a diagnostic procedure. Similarly, numerous contraindications were individuated for surgical lung biopsies procedure, such as obesity, low forced expiratory volume in the first second (FEV1), low diffusion lung carbon monoxide (DLCO), age, cardiological comorbidity, previous neoplasm, and respiratory restrictive pattern. Even if previous literature already reports procedures performed in awake; the peculiarity of the reported case is the concomitant presence of two suspected pulmonary pathologies (including possible interstitial lung disease) in a patient with multiple concomitant features that could contraindicate surgery (age, obesity, cardiological comorbidities, restrictive pulmonary pathology, previous cancer). We believe in successfully carrying out the procedure, even in this special case. We present the following case in accordance with the CARE reporting checklist (available at https://vats.amegroups.com/article/view/10.21037/vats-22-33/rc). 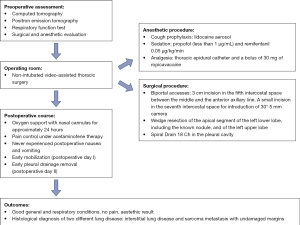 In the diagnostic hypothesis of idiopathic pulmonary fibrosis (IPF) with possible concomitant lung cancer, lung biopsy was indicated; due to age, multiple comorbidities, anesthetic risk of a procedure performed in general anesthesia, and patient willingness, it was considered appropriate to perform the lung biopsy using a minimally invasive approach.

After multidisciplinary discussion and to comply with the patient’s willingness, the decision to perform an awake VATS was established.

During a NITS, the patient must be unresponsive to surgical manipulation and noxious stimuli. For this reason, cough prophylaxis and analgesia management are key elements preserving good gas exchanges. Lidocaine aerosol was offered for cough prophylaxis; sedation was achieved by target-controlled infusion of propofol (less than 1 µg/mL tailored according to patient’s responsiveness) and remifentanil 0.05 µg/kg/min. The thoracic epidural catheter was placed at the T6–T7 level, and a bolus of 30 mg of ropivacaine was administered to obtain a complete somatosensitive block. Analgesia was checked by pinprick test before skin incision. Intraoperative monitoring was set according to standard guidelines, including continuous invasive blood pressure measurement and capnography. Supplemental oxygen with nasal cannulas was offered and tailored according to pulse oximeter with oxygen saturation (SpO2) target higher than 90%.

A 3-cm incision was made in the fifth intercostal space between the middle axillary line and the anterior axillary line. The Ankalaps® wound retractor (size extra small, incision length 2–4 cm) was positioned and, under direct vision, a second incision was made in the seventh intercostal space for the introduction of 30° 5 mm thoracoscopic camera (Figure 3). 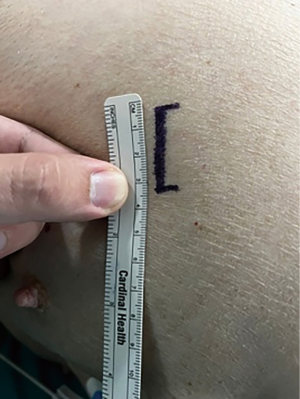 Figure 3 Skin incision. The picture shows the size of the skin incision, made in the fifth intercostal space between the middle and ante-axillary lines.

A wedge resection of the apical segment of the left lower lobe, including the known nodule, and a wedge resection of the left upper lobe was performed with ETHICON ECHELONTM with GST technology (Johnson & Johnson, New Brunswick, NJ, USA). A Spiral Drain 18 Ch (Redax S.p.A., Italy) was placed in the pleural cavity. There were no intra-procedural complications. The surgical time was 45 min. No intensive care unit (ICU) post-operative observation was necessary.

Chest X-ray was performed on the postoperative day I and after chest drain removal, and the findings were found to be compatible with normal surgical outcomes (Figure 4).

Figure 4 Post-operative chest X-ray. The images show the postoperative outcome with and without pleural drainage; there are no pneumothorax or pleural effusion.

There was no surgical or anesthetic adverse event.

The total hospital stay was of 6 days, mainly due to the patient social condition in order to allow the caregiver to properly take care of the patient.

At the outpatient check-up, the patient was in good general and respiratory condition, did not complain of chest pain, the surgical wounds appeared to be completely consolidated, and the chest X-ray was regular.

On the definitive pathological report, the most probable diagnosis of non-small cell lung cancer was indeed excluded, and the lesion was identified as a pulmonary localization of pleomorphic sarcoma, compatible with metastases of scalp sarcoma. The computed tomography pattern of suspect interstitial lung disease was identified as lung parenchyma with foci of chronic follicular inflammation of the peribronchial interstitium with peribronchiolar metaplasia and signs of homogeneous interstitial fibrosis. Although it is not a normal architecture, it is not strictly compatible with any interstitial disease. The resection margins were disease-free.

This study was conducted in accordance with the Declaration of Helsinki (as revised in 2013). The authors certify that they have obtained all appropriate patient consent form. In the form, the patient has given his consent for his images and other clinical information to be reported in the journal. The patient understands that his name and initials will not be published, and due efforts will be made to conceal his identity, but anonymity cannot be guaranteed. A copy of the written consent is available for review by the editorial office of this journal.

The surgery-induced stress response activates a spectrum of metabolic processes that induce a change in the homeostasis of the inflammatory, hormonal, and genomic aequilibrium, inducing hypermetabolism and hypercatabolism and leading to muscle wasting, impaired immune function and wound healing, organ failure, and potentially death (8). Moreover, elderly patients handle severe stress poorly because of a lack of organ system reserve that decreases the ability to respond to biological stress (9). Patients with fibrotic interstitial lung disease may be frail due to the consequences of pulmonary restrictive pattern typical of the interstitial disease, other than age and other comorbidities (10-12).

In thoracic surgery, some important difficulties have to be considered when indicating the surgical lung biopsy in patients with interstitial lung disease. This lung affection impairs pulmonary function, and the patients may be more affected by surgical pulmonary manipulation, hyperoxia, and barotrauma derived by selective mechanical ventilation (13). Performing a thoracic surgical procedure in spontaneous ventilation with mild sedation and loco-regional analgesia could reduce the perioperative risk for the patient, especially for patients who would have been otherwise deemed excluded from surgery (14,15).

As a part of the eligibility of the non-intubated technique in thoracic surgery, clear indications and patient selection criteria are lacking. Often BMI ≥30 kg/m2 and age are considered risk factors or even contraindications, but there is not a common agreement on considering obesity or the elderly as an absolute exclusion criterion (16).

NITS under locoregional anesthesia and slight sedation are indeed well tolerated in the elderly and safer for several indications, as shown by previous studies (17). The procedure is indicated in patients with significant risks for intubated general anesthesia, for simple and easy-to-perform procedures, and for pulmonary resection requiring an experienced surgical team. The aim is to avoid the adverse effect of deep anesthesia, tracheal intubation, controlled mechanical ventilation, and residual muscle relaxation (18).

The major limitation of the widespread use of this procedure is the fear of managing complications which can be both surgical and anesthetic. The surgical team has to be ready to convert quickly the procedure and proceed to intubation in case of hypoxemia, hypercapnia, uncontrolled cough, bleeding, or severe adhesions. For this reason, it is a procedure that requires an experienced team.

Initial results are encouraging and illustrate that these techniques appear to be feasible and safe and can provide improved postoperative outcomes, including better postoperative pain scores, lower morbidity rates, and shorter hospital lengths of stay (19).

The peculiarity of the reported case is the simultaneous presence of two pulmonary pathologies in a patient with more than one feature that could contraindicate surgery (age, obesity, cardiological comorbidities, restrictive pulmonary pathology, previous cancer). Awake minimally invasive surgery was effective and safe in this cases of difficult thoraco-pulmonary surgical approaches due to the patient’s age, respiratory condition, and multiple comorbidities.

The limitation of our observations is that they are based on a single patient; we are aware that further studies are needed, and we hope to contribute to the widespread of non-intubated video-assisted thoracoscopic surgery, especially as a valid alternative in patients otherwise excluded from surgery.

Our case is an example of how awake minimally invasive surgery is effective and safe in cases of difficult thoraco-pulmonary surgical approaches due to the patient’s age, respiratory condition, and multiple comorbidities. The patient’s clinical course confirms good pain control, no need of an ICU post-operative stay, and the achievement of a histological diagnosis with a complete neoplasm resection with undamaged margins.

Provenance and Peer Review: This article was commissioned by the Guest Editor (Mark R. Katlic) for the series “VATS in Older Adults” published in Video-Assisted Thoracic Surgery. The article has undergone external peer review.

Reporting Checklist: The authors have completed the CARE reporting checklist. Available at https://vats.amegroups.com/article/view/10.21037/vats-22-33/rc

Conflicts of Interest: All authors have completed the ICMJE uniform disclosure form (available at https://vats.amegroups.com/article/view/10.21037/vats-22-33/coif). The series “VATS in Older Adults” was commissioned by the editorial office without any funding or sponsorship. FG serves as an unpaid editorial board member of Video-Assisted Thoracic Surgery from August 2022 to July 2024. The authors have no other conflicts of interest to declare.

Ethical Statement: The authors are accountable for all aspects of the work in ensuring that questions related to the accuracy or integrity of any part of the work are appropriately investigated and resolved. This study was conducted in accordance with the Declaration of Helsinki (as revised in 2013). The authors certify that they have obtained all appropriate patient consent form. In the form the patient has given his consent for his images and other clinical information to be reported in the journal. The patient understand that his name and initials will not be published, and due efforts will be made to conceal his identity, but anonymity cannot be guaranteed. A copy of the written consent is available for review by the editorial office of this journal.