Bronchial carcinoid is a low-grade neuroendocrine tumor that can be histologically classified into typical and atypical carcinoid. Surgical resection is the first choice for a typical carcinoid since it does not respond well to chemotherapy or radiotherapy. However, since it grows slowly and has a low frequency of lymph node metastasis, the prognosis is good even with tumor reduction surgeries. In addition, preservation of lung function is vital to maintain a patient's quality of life (QOL). Flap brachioplasties were effective for the resection of bronchial tumors taking into account function recovery and postoperative complications. Although the case of complete video-assisted thoracoscopic surgery (cVATS) have increased in recent years, there have been few reports of flap bronchoplasty because of technical difficulty. Here, we report a case of a superior segmentectomy with flap bronchoplasty for typical carcinoma by cVATS of a typical carcinoid in the left upper and lower lobes. We present the following case in accordance with CARE reporting checklist (available at https://vats.amegroups.com/article/view/10.21037/vats-22-12/rc).

A woman in her 20s, with no history of smoking, presented with dyspnea and anterior chest tightness. She visited a local hospital and chest computed tomography (CT) scans showed a mass lesion protruding into the left lower lobe bronchus. Immediately after that, she was referred to thoracic surgery department for surgical treatment. A tumor was noted to be obstructing her lower lobe bronchus, causing atelectasis in the left peripheral lung. Preoperative radiographic findings showed atelectasis in the left lower lobe. Chest CT performed after the improvement of atelectasis revealed a 15 mm×18-mm-sized mass located from the left second carina to the left lower lobe bronchus root, almost obstructing the lower lobe bronchus. Bronchoscopy confirmed a tumor occupying the B6 entrance, but the peripheral part of B6 remained intact (Figure 1). Positron emission tomography/CT showed an SUVmax of 2.6, supporting the diagnosis of a typical low-grade carcinoid. In this case, we planned a flap bronchoplasty by c-VATS considering invasiveness and appearance because the patient is a young woman. 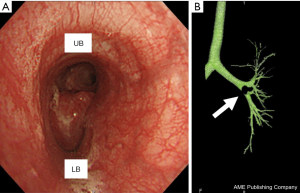 All procedures performed in this study were in accordance with the ethical standards of the institutional and/or national research committee(s) and with the Helsinki Declaration (as revised in 2013). Written informed consent was obtained from the patient.

We performed the surgery using a two-window method (1) between the anterior fifth intercostal space and the posterior sixth intercostal space. We divided the left upper lobe and superior segment (S6) using a surgical stapler. The pulmonary artery (A6) and pulmonary vein (V6) were dissected and ligated. A6 and B6 were exposed and dissected distally. After resection of the S6 segment, an incision was made in the B6 bronchus, toward the proximal bronchus, to confirm the base of the tumor. It was confirmed that the tumor had developed from the second carina, near the anterior wall of the left main bronchial cartilage. The upper left lobe bronchial root was resected while ensuring a margin from the tumor, and an intraoperative frozen diagnosis confirmed that the proximal dissection margin was negative.

For the bronchoplasty, the anterior wall excision section was sutured with three needle lumen ligatures with 5-0 PDS, and the basal segment branch was sutured with external ligature to reach the membranous section. The defect was sewn by suturing a central longitudinal incision with two needles using 4-0 PDS. The B6 bronchial wall was trimmed to create a flap, and bronchoplasty was performed with 4-0 PDS continuous running sutures to fill the defect (Figure 2). After bronchoplasty, the fifth intercostal muscle valve was wrapped around the flap. Finally, the surgery was completed (Appendix 1). 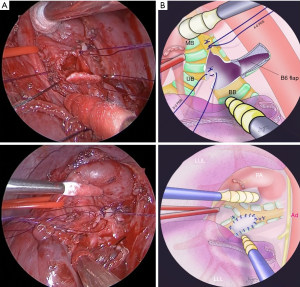 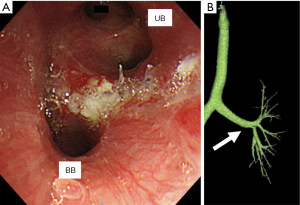 The typical carcinoid behaves less aggressively, it rarely relapses after complete surgical resection, and nodal involvement and metastases to distant sites are rare. Surgery is the treatment of choice for typical carcinoids with the aim of removing the tumor and preserving as much lung tissue as possible. The surgical approach is dependent on the size, location, and tissue type. Following these oncologic norms, a conservative bronchoplastic lung resection could be considered in typical carcinoid central tumors avoiding pneumonectomy.

Sleeve, flap, and wedge bronchial reconstructions are three different surgical techniques used to resect lesions of the main bronchus. The outcomes are poor in terms of mortality and postoperative respiratory function after sleeve resection. Nonetheless, flap and wedge bronchoplasty are used as alternatives to sleeve resection; however, these approaches remain controversial. The usefulness of flap bronchoplasty, in regard to bronchial stenosis, lung function recovery, local recurrence rates, and mortality rates need to be discussed and considered.

According to Khargi et al., bronchial stenosis was observed in 18% and 38% of patients who underwent flap and wedge bronchoplasties, respectively. Lung function recovery in the flap group was higher than that in the wedge group (76% vs. 38%). The 30-day mortality rate of wedge/flap bronchoplasty and sleeve lobectomy were similar at 4% and 4.8%, respectively (2).

It has been reported that flap bronchoplasties are more effective than wedge bronchoplasties in improving the frequency of bronchial stenosis and lung function. It has also been shown that flap/wedge bronchial formations are superior to sleeve bronchoplasty in terms of local recurrence rates. Based on these, it is reasonable to favor a flap bronchoplasty as a surgical technique. According to Hamaji et al., a flap bronchoplasty is useful for adjusting the difference in diameter between the truncus and the lobe bronchus (3); however, the preferred surgical procedure varies depending on which technique is best to preserve lung function and confirm negative incision margins (4). Yokota et al. reported that the rest of the segments prevented a rapid mediastinal shift and did not cause serious complications, such as postpneumonectomy syndrome or dysphagia. The lungs should be preserved to ensure respiratory function in these patients (5).

In addition to flap bronchoplasties, surgeries with c-VATS provide greater advantages compared with assisted VATS (a-VATS) and the conventional open approach. According to Shigemura et al., the 5-year survival rate for peripheral small lung cancer (stage IA) was 96.7% for those who underwent c-VATS, 95.2% for those who underwent a-VATS, and 97.2% for those who underwent open surgery. There were no statistical differences between survival rates among the three groups. However, the operation time was longer for c-VATS procedures (246 min) than for a-VATS (169 min) and open surgery (159 min) (P<0.05). The estimated blood loss was lowest and recovery time was shortest in patients undergoing c-VATS. No postoperative mortalities were noted. The median length of hospitalization was shorter in patients undergoing c-VATS than in those undergoing a-VATS and open procedures (P<0.05) (6). Sihoe et al. concluded that VATS lung cancer resection offered safety and feasibility; better patient-reported postoperative outcomes; less surgical trauma, as quantified by objective outcome measures; and equivalent or better survival than open surgery (7).

Therefore, it can be said that selecting flap bronchoplasties with c-VATS is reasonable, in consideration of patients’ QOL. Of course, there are technical limitations and circumstances in individual cases, but this can be highly beneficial.

Flap bronchoplasty from the resected area allowed preservation of the basal area, and was a useful technique in terms of function preservation. Since the patient in this case was a young female, a full thoracoscopic surgery was completed successfully in consideration of invasion and appearance.

Reporting Checklist: The authors have completed the CARE reporting checklist. Available at https://vats.amegroups.com/article/view/10.21037/vats-22-12/rc

Conflicts of Interest: All authors have completed the ICMJE uniform disclosure form (available at https://vats.amegroups.com/article/view/10.21037/vats-22-12/coif). The authors have no conflicts of interest to declare.

Ethical Statement: The authors are accountable for all aspects of the work in ensuring that questions related to the accuracy or integrity of any part of the work are appropriately investigated and resolved. All procedures performed in this study were in accordance with the ethical standards of the institutional and/or national research committee(s) and with the Helsinki Declaration (as revised in 2013). Written informed consent was obtained from the patient.