According to the latest ATS/ERS/JRS/ALAT official guidelines recommendations for the diagnosis of idiopathic pulmonary fibrosis (IPF) in 2018, the performing of a surgical lung biopsy (SLB) to ascertain the histopathology diagnosis of usual interstitial pneumonia pattern is suggested in patients with uncertain diagnosis and it is frequently required in common clinical practice (1). However, the decision to pursue a biopsy must follow a careful weighing of its real benefit and an accurate risk stratification with the evaluation of morbidity, as well as in-hospital and 30-day mortality (2).

Since patients with interstitial lung disease (ILD) often show impaired pulmonary function, thoracic surgery itself turns to be an important issue when considering the risk of surgical lung biopsy. Even if video-assisted thoracoscopic surgery (VATS), as a method for processing SLBs, improved surgical outcomes, a mortality rate ranging from 4% up to 17% has been reported approaching the ones observed in lobectomies (3,4). The probability of in-hospital mortality in patients undergoing SLBs has been shown to be under- or overestimated due to the average mortality which is otherwise significantly associated with specific risk factors. Thus, the final decision regarding whether or not to pursue the biopsy should be based on the real patient and physician’s interest in reaching a diagnosis to improve treatment and outcome and should be supported by a clear understanding of the risks related to the procedure (5).

One of the most feared complications is the acute exacerbation of IPF which generally has a very poor prognosis, and it is one of the major causes of mortality after surgical biopsy although its etiopathogenesis remains unclear. Prolonged surgical pulmonary manipulation, hyperoxia, atelectrauma and barotrauma derived by selective mechanical ventilation, may represent the physio-pathological triggers related to post-surgical acute lung injury and acute respiratory distress syndrome that are distinguished both for their high mortality rate in this set of patients (6).

The opportunity to approach such patients with less invasive procedures, without losing diagnostic yield, opened a field for new strategies and biopsy techniques. Despite recent enthusiasm for transbronchial lung cryobiopsy (TBLC), the comparison between this and the intubated VATS lung biopsy as the current standard diagnostic approach for obtaining tissue in ILDs still represents a topical debate (7). The current lack of standardization of the technique and the unclear advantages and outcomes related to TBLC set a certain level of uncertainty regarding this procedure as the one derived from the risk of operative death and postoperative respiratory failure connected to standard VATS lung biopsy in general anaesthesia (GA) (8). According to an in-depth meta-analysis, a pooled estimated diagnostic yield typically from 71% to 83% has been shown for TBLC. However, these rates are still not comparable with the ones achieved with the SLB (9). Furthermore, the analysis conducted with the purpose to assess diagnostic concordance between TBLC and SLB both sequentially performed in all patients did not show acceptable results, pointing out criticisms over this endoscopic bronchial procedure (10). A considerable percentage of patients with uncertain ILD diagnosis that underwent non-surgical biopsies is subsequently referred to a surgeon who should be able to collect new tissue samples minimizing structural artifacts of the biopsy specimens allowing a better histopathological examination.

Nowadays, VATS in non-intubated (Ni-VATS) patients is being increasingly used in lung interventions as lobectomy, wedge resection, management of the pneumothorax, and lung volume reduction surgery (11). The most attractive rationale is that avoiding intubated GA reduces its related side effects, possibly resulting in a shorter hospital stay and lower operative risk particularly in patients with compromised respiratory function (12,13). One lung ventilation is known to be related to hypoxemia and lung injury, even though complementary methods have been developed. Moreover, there are still not standard mechanical ventilation strategies for one-lung ventilation with sufficient evidence of safety and efficacy and further research including randomized trials is necessary (14-16).

According to these statements, the application of a less invasive thoracic surgery to ILD patients with the need for a definitive diagnosis appears to be more than a simple suggestion in recent past years.

In 2013 the Annals of Thoracic Surgery published a fascinating article about an institutional experience with awake thoracoscopic biopsy in ILDs (17). The authors reported a series of thirty lung biopsies successfully performed with loco-regional anaesthesia and a minimally invasive approach in spontaneously breathing patients. The procedures resulted in optimal feasibility, low morbidity, and mortality with an excellent diagnostic yield, and shorter in-hospital length of stay.

Since this report, the Ni-VATS approach in ILD patients requesting diagnostic SLB, has been applied by other groups with similar results in terms of explored outcomes (Table 1). Unfortunately, all these studies were limited by the relatively small number of patients enrolled and the retrospective nature of the analysis (18-21). 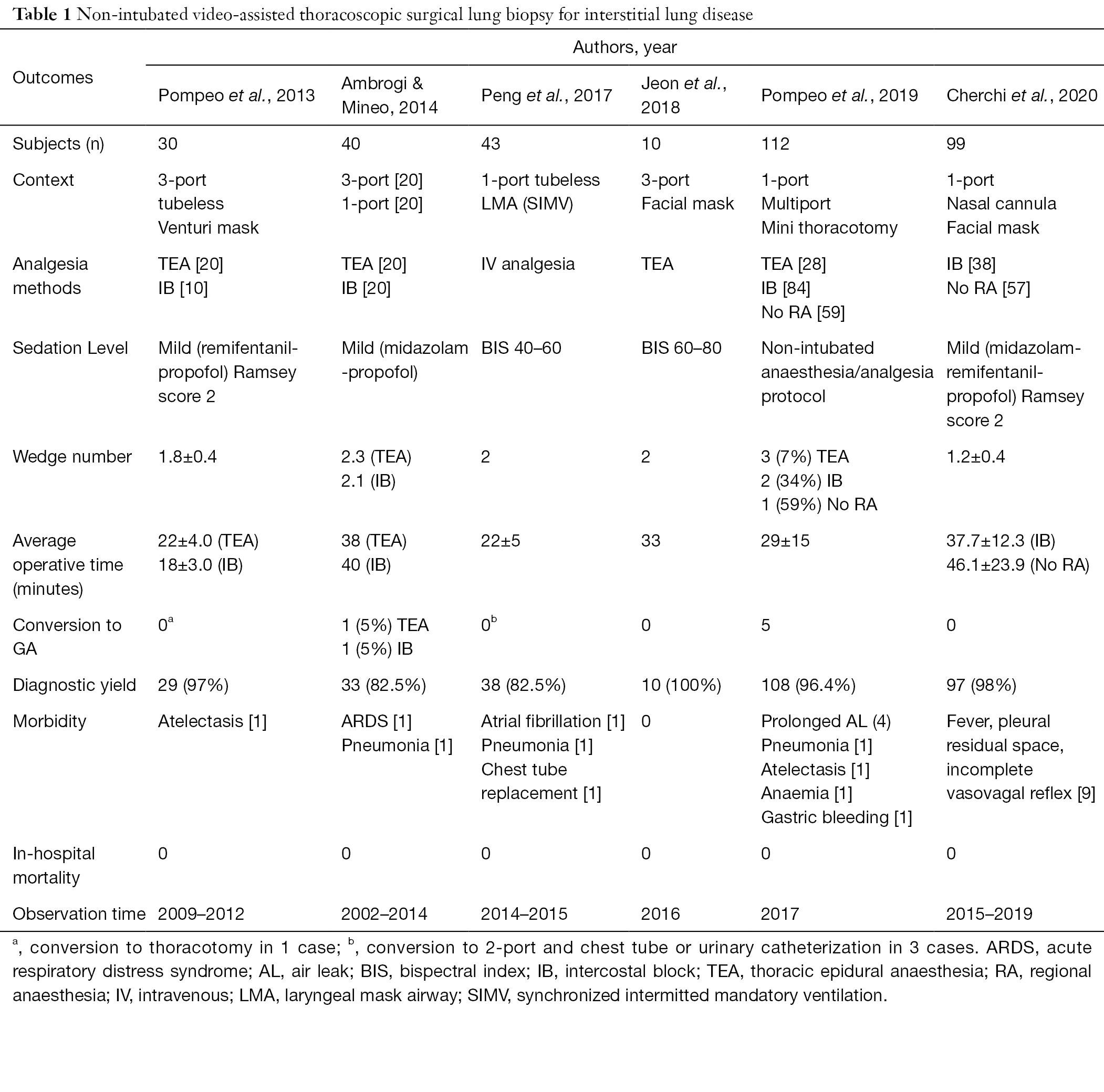 As a part of the correct assessment of the applicability of the Ni-VATS technique in lung surgery for minor procedures, such as SLBs, clear indications and patient selection criteria are lacking. Both selection of candidates and choice of procedures are currently left to local teams based on their institutional case-mix. In particular, body mass index (BMI) ≥30 is often considered an absolute risk factor as well as difficult airway management, American Society of Anaesthesiologists score >3, predicted diffusion lung capacity for carbon monoxide percentage (DLCO%) <20/30%, neurological disorders, or inability to cooperate in the awake setting, anticipated extensive pleural adhesions or previous pulmonary surgery and elder and fragile cases with severe hypoxia (PaO2 <50 mmHg) or hypercapnia (PaCO2 >50/55 mmHg) (17,18,21). Although acceptable, some of these exclusion criteria are often found as common conditions of most ILD patients counteracting Ni-VATS for SLB. For example, there is not a common agreement between authors on considering obesity as an exclusion criterion in this kind of non-intubated surgical procedures and on neither considering the analysis of its influence over outcomes as a potential risk factor (20,21).

Recently, we published our institutional experience over 99 patients who underwent SLB with the Ni-VATS technique. Patients were enrolled following a radiological diagnosis of ILD and a multidisciplinary discussion, the study protocol did not contemplate strictly exclusion criteria except for the previous need for pleural decortication and/or hemodynamic instability. Data regarding diagnostic yield appeared to be comparable to those reported on VATS lung biopsy in GA and single lung ventilation. Moreover, secondary outcomes as morbidity and mortality recorded a lower incidence than those described in other large series of intubated VATS SLB. The main results were comparable to the ones that came out from the other case series with a small number of patients where non-intubated SLB was also used. Besides, we pointed out the stratification of risk factors over outcomes to collect a more precise weighting about BMI and other comorbidity variables explaining outcomes. Interesting conclusions about BMI have been reported, such as the absence of its influence on morbidity and mortality rates (22).

An in-deep commentary about surgical techniques and anaesthesia/analgesia methods should be made to underling the effectiveness of minimally invasive approaches and tubeless/awake managing for SLBs reported in the literature. The number of ports used did not significantly influence the average operating time (from 22 to 46 minutes), neither the average number of samples obtained or the diagnostic yield rate (from 82.5% to 100%). Thoracic epidural anaesthesia or intercostal block (IB) were mainly used for pain control, even if some groups reported experience on patients who underwent surgery without regional anaesthesia. Comparing the three methods, it seems that IB could be beneficial in terms of operation time and in-hospital stay (18,21,22). Ni-VATS SLB resulted in low morbidity (3.3% to 7%) without in-hospital mortality.

In conclusion, we could express a moderate enthusiasm regard the non-intubated lung biopsy, especially compared with perioperative surgical outcomes reported in the intubated techniques series. According to current indications for ILD diagnosis, Ni-VATS SLB should be considered as a valid alternative to the standard VATS approach, even (but not only) in those patients with poor lung function for whom GA is contraindicated. This evidence could motivate further interest in gaining more experience and promoting such interventions as possible when a surgical biopsy is needed. Well-designed randomized trials comparing Ni-VATS SLB versus standard VATS or non-surgical biopsy techniques will help assess more reliably the advantages and disadvantages of this surgical strategy.

Provenance and Peer Review: This article was commissioned by the editorial office, Video-Assisted Thoracic Surgery for the series “Non-Intubated Thoracic Surgery. A Global Perspective”. The article did not undergo external peer review.