Thoracic outlet syndrome (TOS) is defined as the set of signs and symptoms due to compression of the neural and vascular structures that pass through the upper opening of the chest. The anatomical structures involved are the brachial plexus, the artery and the subclavian vein, in their paths between the neck and the armpit. This syndrome is divided into 2 types, neurogenic and vascular, although they can overlap; 95% of patients suffer from neurogenic TOS, 4% venous TOS and 1% arterial TOS (1). Treatment can be medical or surgical. The latter is indicated when conservative management fails. It is based on the decompression of the compromised structures, and consists of: resection of the first rib, scalenotomy, and resection of the cervical rib if it exists (2). Historically, extrathoracic approaches have been used, including posterior, supraclavicular, and transaxillary approaches (3). In 1999, Ohtsuka et al. described the first endoscopic approach for resection of the first rib (4). Since then, the video-thoracoscopic technique has been optimized, finding in the literature various totally endoscopic approaches. We present the surgical technique used by our team, using 2 ports.

Any patient with TOS, of any etiology, can be a candidate for video-assisted surgical treatment. All patients are evaluated in a multidisciplinary way, with neurologists, vascular clinicians and orthopedists, according to the sign-symptomatology. Most go to the thoracic surgeon after unsuccessful conservative treatment: pharmacological, physiotherapeutic, orthopedic and/or endovascular.

They are interrogated for symptoms such as: upper limb and shoulder pain, muscle weakness, paresthesias, claudication or pseudoangina phenomena, Paget-Schroetter syndrome or subclavian vein thrombosis, Raynaud syndrome, and dermal trophic disorders, ischemia and gangrene. In turn, semiological maneuvers such as that of Adson, Wright and Ross are performed.

Among the complementary studies that are requested, we have color ultrasound, angio-resonance or angio-tomography, angiography and venography, and electrophysiological studies.

Once the surgery was decided, we requested a complete blood test, electrocardiogram, and spirometry to assess lung function, since one-lung ventilation was performed.

All procedures performed in studies involving human participants were in accordance with the ethical standards of the institutional and/or national research committee(s) and with the Helsinki Declaration (as revised in 2013). Written informed consent was obtained from the patient.

Patients are admitted to the hospital the morning of the day of surgery. They fast for 8 hours, and take 1 gram of paracetamol orally 2 hours before the start of surgery on the recommendation of the anesthesia department. Already in the operating room, general anesthesia and selective intubation with a double lumen tube are performed, with position control with a bronchoscope.

The hospital has a Storz or Full HD Covidien video tower. Either one is used. The tower is placed opposite the surgeon. We have basic instruments, which are adapted to surgery. We always have on the surgical table as specific but not specialized instruments: disc forceps, Lempert scraper, double utility forceps, deep forceps, curved 90-degree forceps, costotome and small curette. In the postoperative period, we prefer to use a K225 pleural drainage tube.

The patient is placed in lateral decubitus with the arm abducted at 90 degrees and held in an arch or upper bar placed at the patient’s head by a bandage that carefully wraps the elbow and forearm. Surgical fields are placed, after asepsis and antisepsis. We used 2 incisions: the first 10 mm, for the video camera, was performed at the level of the 7th intercostal space in the mid-axillary line, and a 30-degree Karl Storz optic was inserted through a thoracoport; and the second access is located in the 3rd or 4th intercostal space on the axillary midline. It is performed under thoracoscopic vision and measures 3 cm. In this last incision we place a wound retractor to facilitate the entry and exit of the instrument (Figure 1).

Figure 1 Patient in lateral decubitus, the position of the 2 ports and the endoscopic vision of the working port are observed.

The intervention begins with the identification of the first rib. For this, it is very important to have the lung collapsed, since its anatomical situation is apical and posterior (Figure 2).

Figure 2 Identification of the first rib on the right and left sides.

The parietal pleura is opened completely over the rib, from the chondro-sternal junction to the costovertebral joint, with a monopolar scalpel. The vessels through the rib are sectioned, and a better rib visualization is obtained. The mammary vessels are preserved. The edges of the pleura are then retracted laterally and medially from the ribs, with the help of a Lempert curette, always exerting force against the rib body and its edges (Figure 3).

Figure 3 The dissection of the pleural edges through the periosteum is observed using the curette.

Then, we continue with the dissection and section of the chondro-sternal joint, which will allow us to begin pulling down the entire rib. We use a disc forceps in this step (Figure 4A). With the curette again, dissection of the sectioned portion of the rib is performed, giving downward force, and the muscular and ligament junctions between the rib and the clavicle are exposed. They are sectioned with electrocautery (Figure 4B).

Figure 4 (A) Section of the chondral end of the rib with disc forceps; (B) downward traction with the curette and intercostal muscle section on the lateral edge of the rib.

As these structures are released, the lateral edge is advanced and the intercostal muscles are sectioned. Then, maintaining traction, the muscle bundles of the scalenes begin to appear, and we continue to use the curette, very close to the periosteum, to remove the insertions from the muscles and further separate the rib (Figure 5A). With blunt maneuvers, carefully using a small gauze, the safe dissection is continued, between the rib and the vascular nervous structures (Figure 5B).

Figure 5 (A) Dissection of the scalene muscle fascicles with curettage with the help of traction; (B) use of gauze to separate rib from vascular and nerve structures.

We continue with the internal edge, releasing with a monopolar scalpel the remaining inserts of the scalene muscles, with the help of a curved forceps (Figure 6A). Releasing the rib from the muscular and aponeurotic insertions, with a curette, the rib is dissected towards the costovertebral insert (Figure 6B). This maneuver is safe and is performed by passing the posterior limit of the brachial plexus, under constant vision of the upper face of the rib.

Then the rib can be sectioned with a costotome or disarticulated (Figure 7). 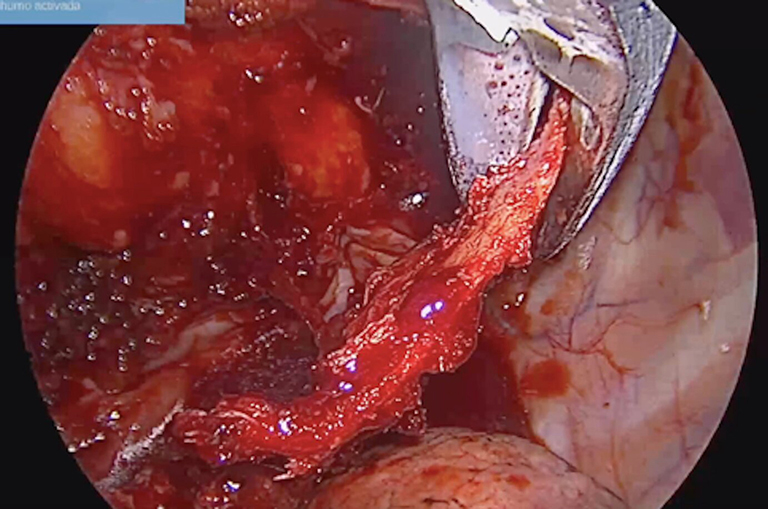 In this way, the first rib is removed. The free subclavian vein, subclavian artery, and brachial plexus can be visualized along their paths (Figure 8). It is essential to verify that there is no ligament or fibrous or muscular band between the structures, since it could be a cause of recurrence of the syndrome.

After the surgery, a pleural drainage tube is placed through the port of the video camera. The lung is inflated and then the working incision is closed by planes.

The patient was extubated in the operating room and then went to the recovery room.

The surgical team consists of 2 surgeons, 1 anesthesiologist, 1 instrument and 1 circulating instrument. The main surgeon stands facing the patient. The assistant surgeon stands on his right side to manipulate the video camera. The anesthesiologist must have experience in the management of patients undergoing thoracic procedures and one lung ventilation.

The postoperative period is usually short. The patient remains hospitalized for 24 hours. Early active mobilization is stimulated. Intravenous analgesia is indicated for better physical and pulmonary recovery. A chest radiograph is performed the next day, and if no abnormalities are seen and the pleural drainage shows no complications, it is removed. The patient is discharged 24 hours after surgery.

Conflicts of Interest: All authors have completed the ICMJE uniform disclosure form (available at http://dx.doi.org/10.21037/vats-20-35). The authors have no conflicts of interest to declare.