The debate over the role of segmentectomy as an alternative to lobectomy for stage 1 lung cancer was started by Jensik et al., when they showed equivalent survival between segmentectomy and lobectomy in their series presented in American Association of Thoracic Surgeons in 1971 (11).

Lobectomy is perceived as a better surgical approach by many authorities with the assumption that lobectomy allows for a more radical lymphadenectomy and better margins thus decreasing the chances of local recurrence. Although no randomized study is available yet to prove that segmentectomy and lobectomy have similar outcome for stage 1 lung cancer, but single institutional reports and meta-analyses have shown similar outcomes for at least T1a and T1b tumors.

Our indications for segmentectomy are:

We perform intraoperative segment specific lymph node evaluation with frozen section before committing to segmentectomy. Consideration must be given to the logistic of multiple intraoperative frozen sections which can be resource consuming and may not be feasible in every institution.

The dissection is started by opening the pleura over the posterior surface and the apex of the lung and over the hilum. Frozen section of level 10 lymph node should be performed by skeletonizing the space over the right main stem bronchus till the inferior margin of the azygous vein. Subsequently, lymph node between apical segment vein and the anterior segmental pulmonary artery branch should be removed. If these lymph nodes are negative, then right upper lobe segmentectomy can be pursued with caution.

The mediastinal and hilar lymph node dissection is completed as described. The apical vein is transected leading to exposure of the lymph node at the origin of the truncus over the pulmonary artery. If this lymph node is not sent for frozen then it should be done at this point as lobectomy would be a better approach if this lymph node is positive. Subsequently, the truncus branch is dissected till its bifurcation into apical and anterior segment. The lymph node at bifurcation (level 12) is removed. The apical branches are transected leading to the exposure of B1. There are usually smaller lymph node exposed at the meeting site of the three segmental bronchi. The bronchus is cleared to the base and frozen section should be obtained of any suspicious lymph node (Figures 1,2). 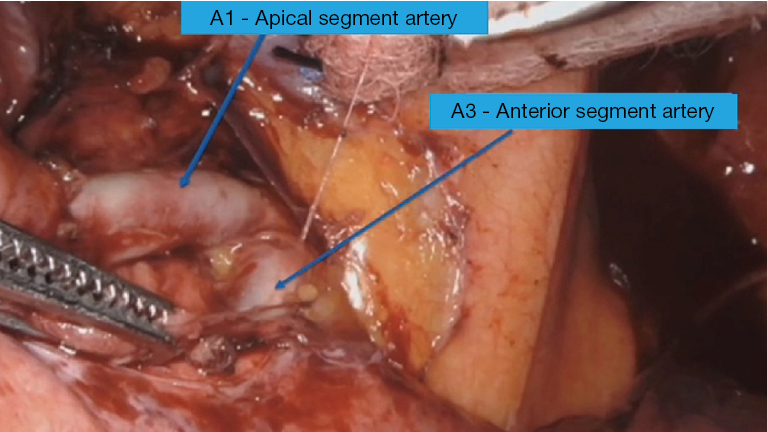 Figure 1 View of the first branch of right pulmonary artery dividing into anterior (A3) and apical branches (A1) with lung retracted caudally.

Figure 2 Right upper lobe apical segment bronchus (B1) after the transection of A1.

After the completion of the mediastinal and hilar lymph node dissection, the space between the upper lobe and middle lobe vein is dissected. Subsequently, the dissection is done in fissure extending it anteriorly and exposing the central vein of the right upper lobe. The anterior segment branch (V3) is transected leading to the exposure of the bronchus and the artery along with small lymph nodes. It will be appropriate to proceed with segmentectomy if the frozen section is negative otherwise a lobectomy would be a better option (Figure 3) 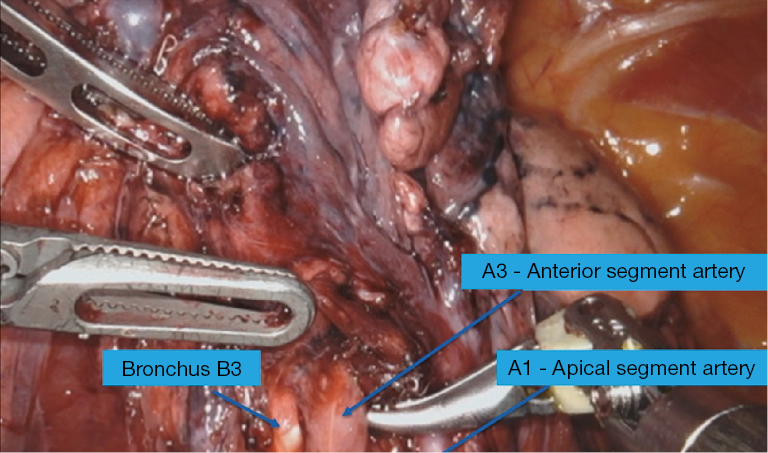 After the completion of the mediastinal and hilar lymph node dissection the fissure is completed posteriorly. The posterior segmental arteries are transected leading to the exposure of the posterior surface of the bronchus and lymph node between lingular and upper division segmental bronchi. The sample should be sent for frozen section. Anteriorly the upper division vein is transected leading to the exposure of the lymph node over the first branch of the pulmonary artery which also should be confirmed to be negative before committing to segmentectomy.

The pleura over the posterior surface of the lung is opened and the space between the vein and the bronchus is dissected to expose the level 11 lymph node which should be confirmed to be negative.

Any suspicious lymph node over the pulmonary artery and branches should be confirmed to be negative.

Transection of the targeted segmental artery leads to the exposure of the lymph node over the bronchus which should be sent to frozen.

In conclusion, segmentectomy is an acceptable alternate to lobectomy for tumors less than 2 cm.

The authors acknowledge the editorial help of Syeda Sara Abbas.

Provenance and Peer Review: This article was commissioned by the editorial office, Video-Assisted Thoracic Surgery for the series “Robotic Segmentectomies”. The article has undergone external peer review.

Conflicts of Interest: All authors have completed the ICMJE uniform disclosure form (available at http://dx.doi.org/10.21037/vats-2019-rcs-08). The series “Robotic Segmentectomies” was commissioned by the editorial office without any funding or sponsorship. Alper Toker served as the unpaid Guest Editor of the series and serves as an unpaid editorial board member of Video-Assisted Thoracic Surgery from Jun 2019 to May 2021. The authors have no other conflicts of interest to declare.