Chyle leak is uncommon and usually due to the injury of thoracic duct secondary to iatrogenic complication from head and neck surgery. It can also be due to extensive lymphadenopathy due to malignancy, post chemotherapy/radiotherapy or trauma (1). The presence of milky, non-purulent fluid and confirmation with laboratory investigation (triglyceride level >110 mg/dL, lymphocyte count >90% of total white blood cell count or total protein content similar to plasma) leads to the diagnosis of chyle leak (2). The morbidity and mortality are high if appropriately timed intervention is not carried out (3). The management of chyle leak is challenging and needs multimodality approach (1-3). There are very few reported cases of chyle leak surgically managed by uniportal video-assisted thoracoscopic surgery (VATS) in the literature.

A 35-year-old gentleman was admitted for symptomatic anaemia and palpable bilateral supraclavicular nodes. During admission, his chest radiography showed widened mediastinum. Contrast enhanced computed tomography (CECT) of thorax revealed multiple lymphadenopathy in bilateral supraclavicular, mediastinum, left axillae and para-aortic region which was suggestive of lymphoma. As part of the workout for lymphoma, patient underwent excision biopsy for right supraclavicular lymph node. However, it was complicated with chyle leak following biopsy (Figure 1A).

Figure 1 Patient with iatrogenic chyle leak. (A) Pre-operation. (B) Supraclavicular chyle leak was minimal post-operation, wound is clean and dry.

Patient was referred to our centre for further management of the complication. He was started on a low-fat diet (fat intake <10 g/day) with medium-chain triglyceride for 2 weeks and subcutaneous injection of octreotide 0.1mg, 8 hourly for 3 days. Despite the treatment, the chyle leak remained high, about 1.5–1.8 litres per day.

While on non-surgical treatment, lymphangiogram was performed and revealed chyle leak localized over right supraclavicular collection with no other leak elsewhere. In the presence of multiple lymphadenopathy suspicious of lymphoma and failure of diet modifications and somatostatin analogue administration, it was unlikely the chyle leak will resolve with non-surgical treatment. Hence, we decided to perform uniportal VATS right thoracic duct ligation (Video 1). Post operatively, the chyle leak reduced significantly. The patient was continued on low-fat diet until the chyle leak reduced. Normal diet was resumed at Day 3 of surgery after the wound dried off (Figure 1B). Post-operative recovery was uneventful, and patient was discharged at Day 5 of surgery. The histopathological examination of lymph node was consistent with Hodgkin lymphoma, nodular sclerosing type. He is currently on chemotherapy. During the clinic review after 2 weeks, right supraclavicular wound was dry and healing well.

All procedures performed in studies involving human participants were in accordance with the ethical standards of the institutional and/or national research committee(s) and with the Helsinki Declaration (as revised in 2013). Written informed consent was obtained from the patient.

Major lymphatic duct injury may cause chyle leak, especially in head and neck surgeries. Based on available literature, chyle leak occurs in 0.5–1.4% of thyroidectomy and 2–8% of neck dissections (1). Chyle leak may result in poor wound healing, electrolyte imbalance, malnutrition, immunosuppression, pneumonia and sepsis. In view of these serious complications, prompt recognition and management of chyle leak is important.

The thoracic duct is the largest lymphatic channel of the body (4). Its function is to return lymph to the circulatory system from the entire left and right lower half of the body. Thoracic duct originates at the prevertebral plain from the cisterna chyli of abdomen, passes through the chest and terminate in the base of left neck between the subclavian and internal jugular veins. The structure of thoracic duct is widely variable with multiple communications of small vessels along its course (4). Thoracic duct injury with lymphatic leaks can occur anywhere along the lymphatic pathway. The thoracic duct is vulnerable to be injured during head and neck surgery due to its close proximity to the internal jugular vein and thinner ductal wall (1). In addition, lymphoma patients may carry higher chance of thoracic duct injury (3,5). Lymphomatous infiltration causes the duct to be more rigid and likely to rupture, hence responsible for 80% of malignancy associated chylothorax similar to the patient described in this case (3,5).

Clinical history and examination play an essential role in establishing the diagnosis of chyle leak. It is characterized by the presence of milky drainage. This milky drainage may correlate with diet modification, which will increase with high fat diet (1,5). Confirmation of chyle can be made with an elevated triglyceride level of drain fluid (>110 mg/dL), the presence of chylomicrons, the elevation of lymphocyte count >90% of the total white blood cell count in the fluid and total protein content approaching that of plasma (1,2). This is followed by the identification of the leakage point. Lymphangiography can be used to demonstrate the site of leakage or blockage. Based on literatures, lymphangiography successfully detects the leak in 64% to 86% of patients with chylothorax and chylous ascites (6). Our patient underwent lymphangiogram procedure through bilateral inguinal lymph node under ultrasound guidance using a 21-gauge spinal needle. Subsequently, lipiodol is injected and intermittent fluoroscopic imaging is obtained to identify the efferent lymphatic or lymph node. Although lymphangiography is a valuable tool however complications may occur such as allergic reactions to lipiodol, extravasation, intra-alveolar hemorrhage and pulmonary lipiodol emboli (6).

Chyle leaks can be categorized as low output (<500 mL/day) or high output (>500 mL/day) (7). Most of the low output chyle leak can be treated successfully with conservative measures which consist of nutritional intervention, pharmacological treatment, infection control, compressive dressing and drainage (8). Nutritional intervention include low-fat (fat intake <10 g/day) or fat free enteral diet, parenteral nutrition without oral intake or combination of both. Nutritional intervention aims to decrease the production of chyle and allow healing, correct fluid and electrolytes imbalances and prevent malnutrition. Long-acting somatostatin such as octreotide (0.1 mg 8 hourly for 3 to 5 days) is added to minimize lymphatic flow and inhibit secretion from digestive system which can reduce lymph flow (1,8).

Surgical exploration is recommended when the chyle leak is not resolving despite non-surgical intervention (8,9). Sieczka and Harvey recommended thoracic duct ligation within 2 weeks of detection if nonsurgical treatment fails to prevent nutritional deficiency, immunosuppression and prevent complication of central line access (10). In our case, the right supraclavicular chyle leak was not reduced with dietary modification or octreotide injection for around 2 weeks. In view of inflamed and infected supraclavicular region with localized chyle leak in lympangiography, decision was made for intrathoracic ligation of thoracic duct instead of local exploration. Therefore, our patient underwent uniportal VATS ligation of right thoracic duct (Figure 2). The ligation was performed encompassing the fat between the azygos vein and thoracic aorta containing the thoracic duct as shown in Figure 2C. The thoracic duct is only ligated and not divided to disrupt chyle flow. This is to prevent injury to the accessory ducts that may be present in view of wide variations of the thoracic duct (4,6,7). Di Chiara et al. described similar approach of thoracic duct ligation with the division of the duct (11). Zhang et al. in his case report described only ligating the thoracic duct without division, similar to our case. Both these authors performed the thoracic duct ligation via uniportal approach (12). 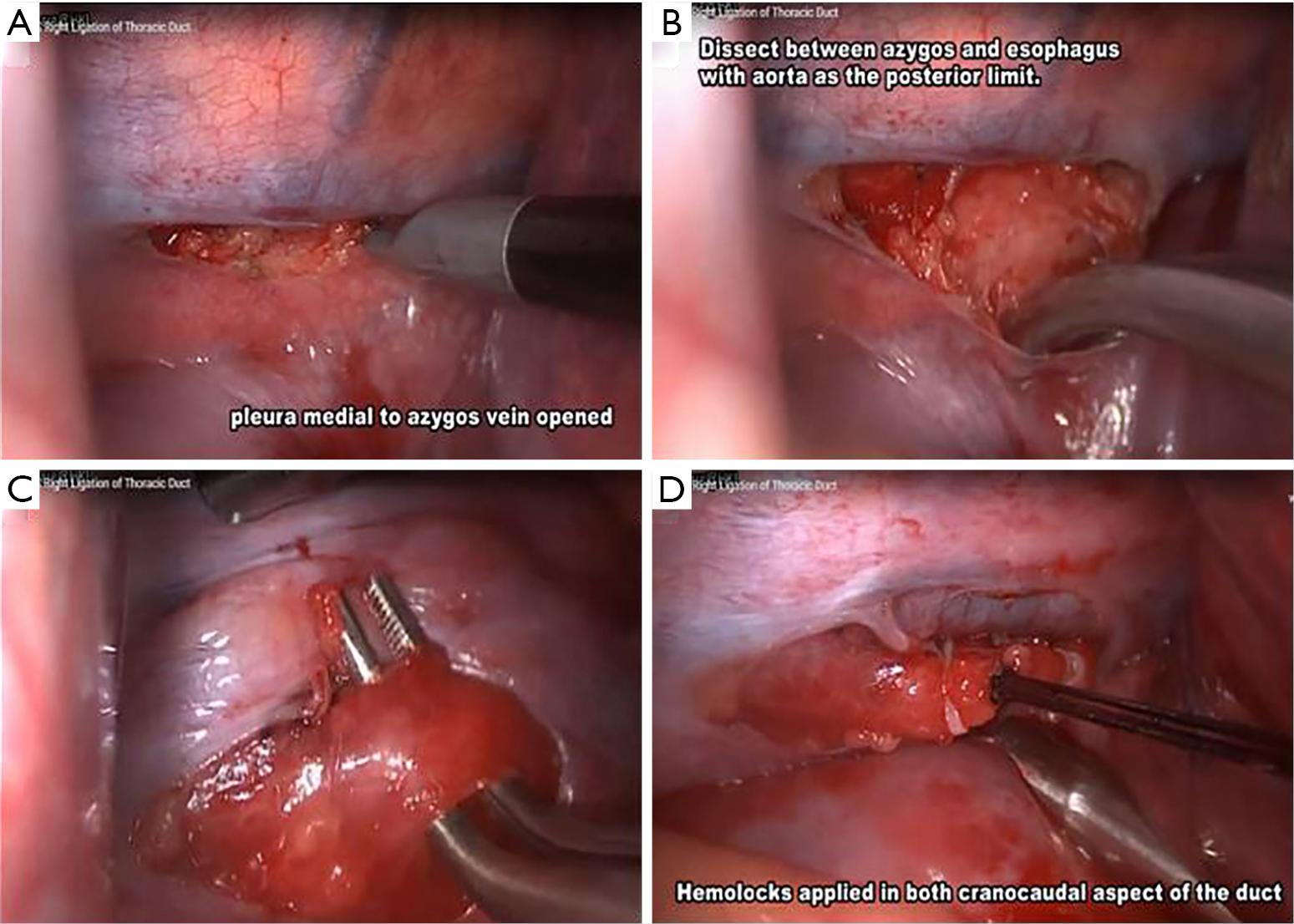 Figure 2 Uniportal VATS right ligation of thoracic duct. (A) Pleural medial to azygos vein opened. (B) Dissection between azygos vein and esophagus. (C,D) The fat between the azygos vein and thoracic aorta containing the thoracic duct was ligated with suture and hemlocks applied, without dividing the duct. VATS, video-assisted thoracoscopic surgery.

There are many other reports of thoracic duct ligation being performed by multiportal VATS (13,14), but this report, along with the reports of Di Chiara et al. and Zhang et al. could create awareness that uniportal VATS can be used to execute the surgery with similarly good result (11,12). Due to the rare incidence of chyle leak, it is impossible to have a comparison study to determine the better surgical approach and that remains a great limitation of this report.

The incidence of chyle leak is uncommon and the management depends on drainage volume, multidisciplinary approach and availability of expertise such as interventional radiologist and thoracic surgeon. Surgical intervention for chyle leak should always be the last resort, but decided early when adequate non-surgical intervention failed. Early referral to thoracic centre is encouraged to prevent potential complications of persistent high output chyle leak. Uniportal VATS thoracic duct ligation could be the approach of choice to treat chyle leak in the thorax or neck.

Reporting Checklist: The authors have completed the CARE reporting checklist. Available at http://dx.doi.org/10.21037/vats-20-37

Conflicts of Interest: All authors have completed the ICMJE uniform disclosure form (available at http://dx.doi.org/10.21037/vats-20-37). The authors have no conflicts of interest to declare.