After complete cancer staging, patients who are considered fit for major surgery should undergo standard preoperative evaluation. Patients with distal esophageal or esophagogastric junction tumors should undergo routine upper GI endoscopy to ensure that the tumor does not extend into the fundus such that a gastric conduit cannot be prepared with an adequate resection margin. Assessment and subsequent optimization of nutritional status, smoking cessation, and initiation of an exercise program can help patients prepare adequately for an esophagectomy. In addition, patients are oriented to use of the incentive spirometer for preoperative chest physiotherapy.

After induction of anesthesia, a single lumen endotracheal tube is placed. Large bore IV access and an arterial line should be placed given the risk for hypotension during mediastinal dissection or passing the conduit through the posterior mediastinum. Flexible esophagoscopy is performed to evaluate the esophagus, tumor location, and assessment for the extent of gastric involvement. Once esophagoscopy is completed, a 16 Fr nasogastric tube is placed.

The patient is placed in the supine position on the operating room table with the arms tucked at the sides. A shoulder roll is placed and the head is turned to the right. It is important to support the head while ensuring adequate extension of the neck to accentuate the border of the left sternocleidomastoid for the cervical phase of the operation. A footboard is placed in preparation for reverse Trendelenburg positioning to improve exposure during the laparoscopic hiatal dissection.

Ports are placed as shown (Figure 1A,B) in a configuration for robotic transhiatal esophagectomy. After establishing pneumoperitoneum, intraperitoneal access is obtained and the abdomen is insufflated with CO2 to a pressure of 15 mmHg. For retraction of the left lateral segment of the liver, a Nathanson liver retractor is placed in the subxiphoid area or a paddle liver retractor placed through a 12 mm port in the right lower quadrant. For longer cases, we have found the paddle retractor to cause less trauma to the liver. Additional port placement techniques have been described by other institutions performing robotic-assisted MI-THE (8). The patient is placed in reverse Trendelenburg position. Prior to any dissection, abdominal exploration is completed to inspect for evidence of metastatic disease. 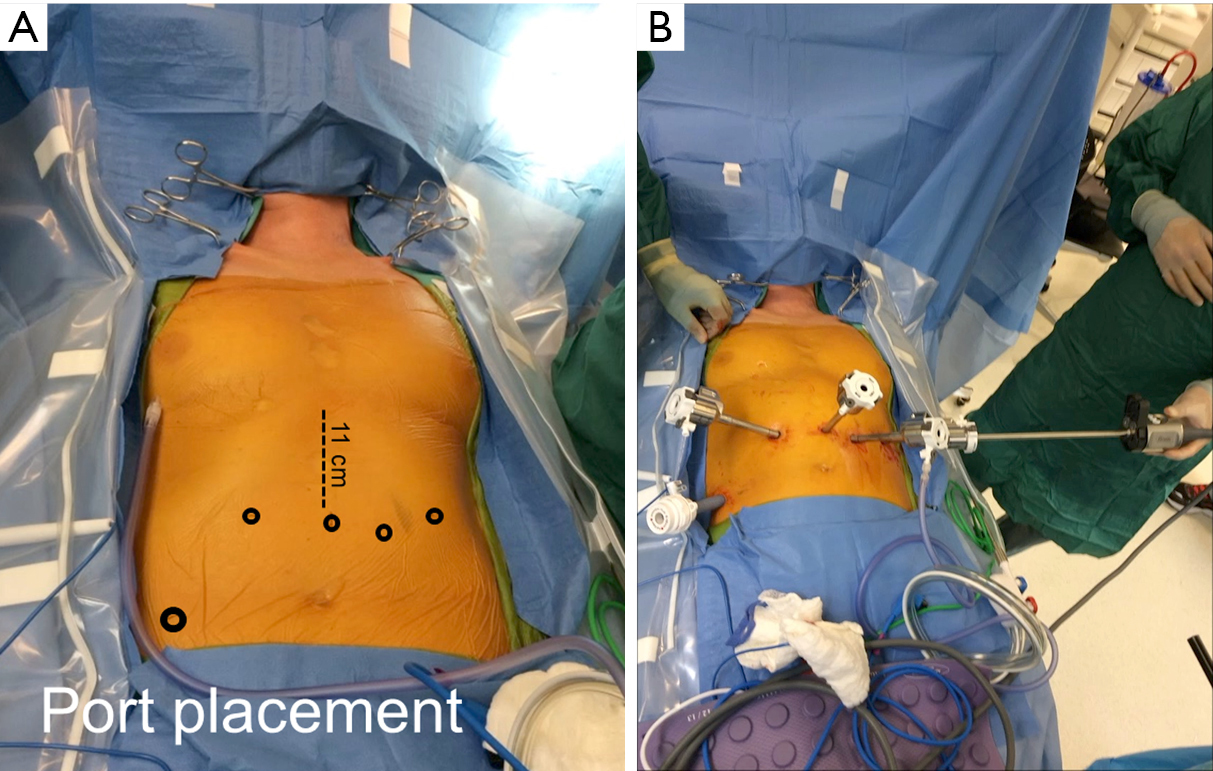 We typically use a bipolar vessel sealing device to mobilize the stomach. Care is taken to avoid trauma to the stomach by minimizing grasping or using a “no-touch” technique using gauze rolls to manipulate the stomach. The right gastroepiploic artery, which constitutes the blood supply to the conduit, is identified and preserved throughout mobilization of the gastric conduit. We typically identify the course of the right gastroepiploic artery and identify the avascular area between where the artery terminates and the short gastric vessels begin. We begin our dissection in this “clear space” and enter the lesser sac and continue to mobilize the greater curvature proximally towards the left crus, dividing the short gastric vessels 1 to 1.5 cm away from the stomach to avoid thermal injury to the stomach.

Once the short gastric vessels are divided, we begin our dissection along the left crus and the anterior aspect of the esophagus, paying attention to avoid denuding the muscle fibers of the hiatus. The omentum is then separated along the greater curvature of the stomach working towards the distal stomach to the level of the pylorus. Ongoing inspection of the course of the right gastroepiploic artery is essential to ensure the omentum is divided 1 to 2 cm inferior to the vessel. The gastrohepatic ligament is divided with the stomach retracted towards the patient’s left. Care is taken to identify a replaced left hepatic artery, which is present in 15% of patients and is preserved. The right crus is identified, and the esophagus is dissected away from the crus, proceeding proximally into the mediastinum (Video 1).

Mobilization of the thoracic esophagus

The esophagus is dissected circumferentially up to the level where the subcarinal lymph nodes are visualized (Video 2). Paraesophageal and subcarinal lymph nodes are dissected from the area and submitted for pathologic analysis. We limit using energy devices for this portion of the nodal dissection in order to avoid inadvertent thermal injury to the posterior membranous airway of the left mainstem bronchus. In addition, it is important not to violate the left or right pleura during the dissection, particularly in patients who have received neoadjuvant radiation therapy. If either pleural space is entered, tube thoracostomy should be considered to avoid hemodynamic compromise from CO2 related pneumothorax. This phase can be deferred until after gastroduodenal mobilization (Kocher maneuver) in order to limit the risk of losing CO2 insufflation before completing most of the abdominal portion of this operation.

Division of the left gastric artery

The stomach is elevated to expose the left gastric pedicle. The celiac lymph nodes are dissected off the vessels to be included in the specimen. The left gastric artery and vein are then separated. The vessels may be ligated with the vessel sealer or with a vascular stapler (Video 3). Care is taken to preserve the common hepatic and splenic arteries.

During the robotic approach, gentle downward traction is placed on the pylorus. In order to maximize length of the conduit, a Kocher maneuver is performed using either the vessel sealer or bipolar device (Video 4). Once the Kocher maneuver is complete, the robotic console is undocked and the midline 8 mm robotic port is converted to a 7 cm utility incision. A wound protector is placed to help with exposure. During the laparoscopic approach, the duodenal mobilization can be performed either laparoscopically or through the midline utility incision. Once the Kocher maneuver is complete the pylorus should be mobilized enough to reach the esophageal hiatus without tension.

To decrease the risk of gastric outlet obstruction after dividing the vagus nerves, a 2 cm long pyloromyotomy (1.5 cm on the stomach and extending 0.5 cm onto the duodenum) is performed using a fine mosquito clamp and the cutting currently on electrocautery, as has been previously described (9).

An incision parallel to the anterior border of the left sternocleidomastoid is performed from the level of the cricoid to the sternal notch. The sternocleidomastoid is retracted laterally, and the omohyoid is divided. The trachea and thyroid are retracted medially using an index finger to avoid trauma to the left recurrent laryngeal nerve. The middle thyroid vein and the inferior thyroid artery are ligated. The esophagus is identified, palpating the nasogastric tube within the esophagus. Sharp dissection is used posterolateral to the tracheoesophageal groove to mobilize the cervical esophagus away from the trachea and left recurrent laryngeal nerve. The cervical esophagus is then encircled with a 1-inch Penrose drain. Upward traction is placed on the Penrose drain as an index finger is used to bluntly dissect the proximal esophagus circumferentially.

Creation of the gastric conduit

After dividing 2–3 vessels along the lesser curve, the gastric conduit is created using multiple firings of a 3.8 mm GIA-60 stapler to “unroll” the stomach, as previously described (9). Following creation of the conduit, we routinely assess the vascularization of the conduit using indocyanine-green dye and near infrared fluorescence imaging. If there are any concerns with perfusion of the most distal aspect of the gastric conduit, revision of this site can be performed, even after advanced to the neck. The gastric conduit is introduced through the hiatus and advanced through the posterior mediastinum. A Babcock clamp can be applied from the cervical incision in order to guide the conduit through the thoracic inlet and delivered to the cervical incision. Care is taken during passage of the conduit to avoid traumatizing the stomach by pushing, as opposed to pulling, the conduit up. It is important to ensure that the conduit is oriented correctly with the staple line positioned towards the patient’s right side.

During the robotic approach, a hand port is then placed and the abdomen reinsufflated. The robot is re-docked and the surgeon’s hand is placed through the hand port to inspect the size of the hiatus. The hiatus is closed anteriorly to 2–3 fingerbreadths using number 1 silk sutures using the large suture-cut needle driver (Video 5). With the laparoscopic approach, the hiatus can either be closed through the utility incision or laparoscopically. One or two 3-0 silk sutures may be placed between the gastric wall and the hiatus to help prevent herniation through the hiatus.

The jejunostomy tube is passed through the left upper quadrant port site and sutured in place. The abdominal incision and associated port sites are then closed.

A chest X-ray is performed in the operating room prior to awakening from anesthesia to ensure that there are no unrecognized pneumothoraces and that the nasogastric tube is properly positioned within the gastric conduit. The nasogastric tube is typically removed on postoperative day 3. A barium esophagogram is performed on postoperative day 6 or 7.

When evaluating MI-THE specific approaches, a systematic review focusing on robotic esophagectomy detailed previous experience with robotic-assisted transhiatal esophagectomy (10). Operative time was generally shorter compared to transthoracic approaches and ranged from 231 to 312 minutes. Major morbidity rates ranged from 23% to 32% across studies included in the systematic review. Operative times for the transthoracic approach ranged from 367 to 693 minutes. Mortality was found to range from 0% to 6% in this study, although mortality rates were limited across studies detailing the transhiatal approach.

A report from van der Horst and colleagues focusing on 31 patients with malignancy of the upper esophagus observed an in-hospital mortality rate of 10% (11). This highlights some of the limitations of this approach for specific types of esophageal lesions. It is also important to consider the substantial learning curve with complex minimally invasive or robotic procedures. However, other retrospective studies have demonstrated perioperative outcomes similar to open esophagectomy suggesting that robotic-assisted MI-THE can be safely performed (12,13). There are limited data for comparison between robotic-assisted MI-THE and the laparoscopic approach. However, findings from a small retrospective study demonstrated similar results between both approaches.

With increasing experience in robotic-assisted esophagectomy, data evaluating outcomes to guide patient selection (i.e. , BMI, neoadjuvant therapy, advanced age) for this procedure have emerged as well (14-16). While not specific to the type of esophagectomy performed, this highlights that robotic assistance may have a specific role for certain patient populations, such as those with an elevated BMI.

As experience continues to develop with MI-THE, future studies will continue to evaluate not only perioperative and oncologic outcomes, but also cost efficiency. Special consideration will be needed to evaluate surgeon “learning curve” associated with MIE-THE while applying novel techniques to an already complex procedure.

Provenance and Peer Review: This article was commissioned by the Guest Editor (Robert E. Merritt) for the series “Minimally Invasive Esophagectomy for Esophageal Carcinoma” published in Video-Assisted Thoracic Surgery. The article has undergone external peer review.

Conflicts of Interest: The authors have completed the ICMJE uniform disclosure form (available at: http://dx.doi.org/10.21037/vats-2019-mie-03). The series “Minimally Invasive Esophagectomy for Esophageal Carcinoma” was commissioned by the editorial office without any funding or sponsorship. RMR serves as an unpaid editorial board member of in Video-Assisted Thoracic Surgery from Mar 2020 to Mar 2022. Dr. RMR reports personal fees from Intuitive Surgical, personal fees from Auris Health, personal fees from Medtronic, outside the submitted work. Dr. RMR is a robotic proctor for Intuitive Surgical, Inc. , an advisor for Medtronic, and a consultant for Auris Surgical. Dr. JL reports financial disclosures from Intuitive Surgical, Inc, outside the submitted work. The authors have no other conflicts of interest to declare.