The management of localized metachronous primary non-small cell lung cancers (MP-NSCLCs) that occur in pneumonectomized patients remains challenging (1). Accepted approaches include stereotactic radiation therapy (SRT), radiofrequency, chemotherapy or surgery. SRT is, in general, the preferred therapeutic modality given its efficacy and lack of important side effects (2). However, in situations of prior mediastinal irradiation, SRT cannot be performed safely and alternative approaches are needed (3). Here we report such a case where a MP-NSCLC was managed surgically with a good perioperative and long-term outcome. We present the following case in accordance with the CARE reporting checklist (available at http://dx.doi.org/10.21037/vats-2020-lm-03).

A 57-year-old patient with a past history of stage IIIA NSCLC (epidermoid, ypT3ypN1M0R0) was managed by neoadjuvant chemotherapy, a left pneumonectomy and adjuvant mediastinal irradiation (60 Gy in 30 fractions). One year following surgery, the patient developed 3 lymph node recurrences (2 retroperitoneal and 1 mediastinal) that were managed by stereotactic radiation therapy (SRT, 35 Gy in 5 fractions on each lesion). Six years following the pneumonectomy, the patient had no local/distant recurrence but developed two spiculated lesions in the lateral segment of the middle lobe (Figure 1A) for which bronchoscopy revealed epidermoid carcinoma. A PET-CT showed strong FDG uptake in both lesions but no mediastinal or distant lesions (Figure 1B). Brain MRI showed no metastasis. SRT simulation using CyberKnife® suggested this approach was dangerous because of the mean cumulative irradiation dose delivered to the myocardium and the risk of pneumonitis on a unique lung (Figure 2). Functionally, the patient had an FEV1 of 79% and a diffusion capacity of 73% (% of predicted values). Spiroergometry VO2 max was of 18 mL/kg/min. Following multidisciplinary consent, we decided to perform a VATS middle lobe lateral segmentectomy on veno-venous ECMO (VV-ECMO) support.

Following intubation, the patient received an intravenous bolus of 5,000 U of Heparin and was placed on a jugulo-femoral VV-ECMO using 22F injection jugular and 25F drainage femoral Medtronic cannulas (Figure 3A). The ECMO pump was started and the flow was brought to 4.8 L/min. Throughout the case, we ensured that the activated clotting time was in the range of 200 s. The patient ventilation was interrupted and the tube was disconnected from the ventilator. Transoesophageal echocardiography was performed to ensure the right lung exclusion had no impact on the right ventricular function. We then placed the patient in the lateral position and performed a lateral middle lobe segmentectomy by VATS combined with mediastinal lymph node sampling (Figure 3B,C). At the end of the surgery, we re-expanded the right lung and started ventilating it again. VV-ECMO was weaned and the patient was drained and extubated. The postoperative course of the patient was uneventful. He was admitted to the intensive care unit for the first night and had a control chest X-ray (Figure 3D). He was mobilized from his bed 6 hours after surgery, was transferred to the ward at 24 hours and was discharged from the hospital on day 3 following chest tube removal. 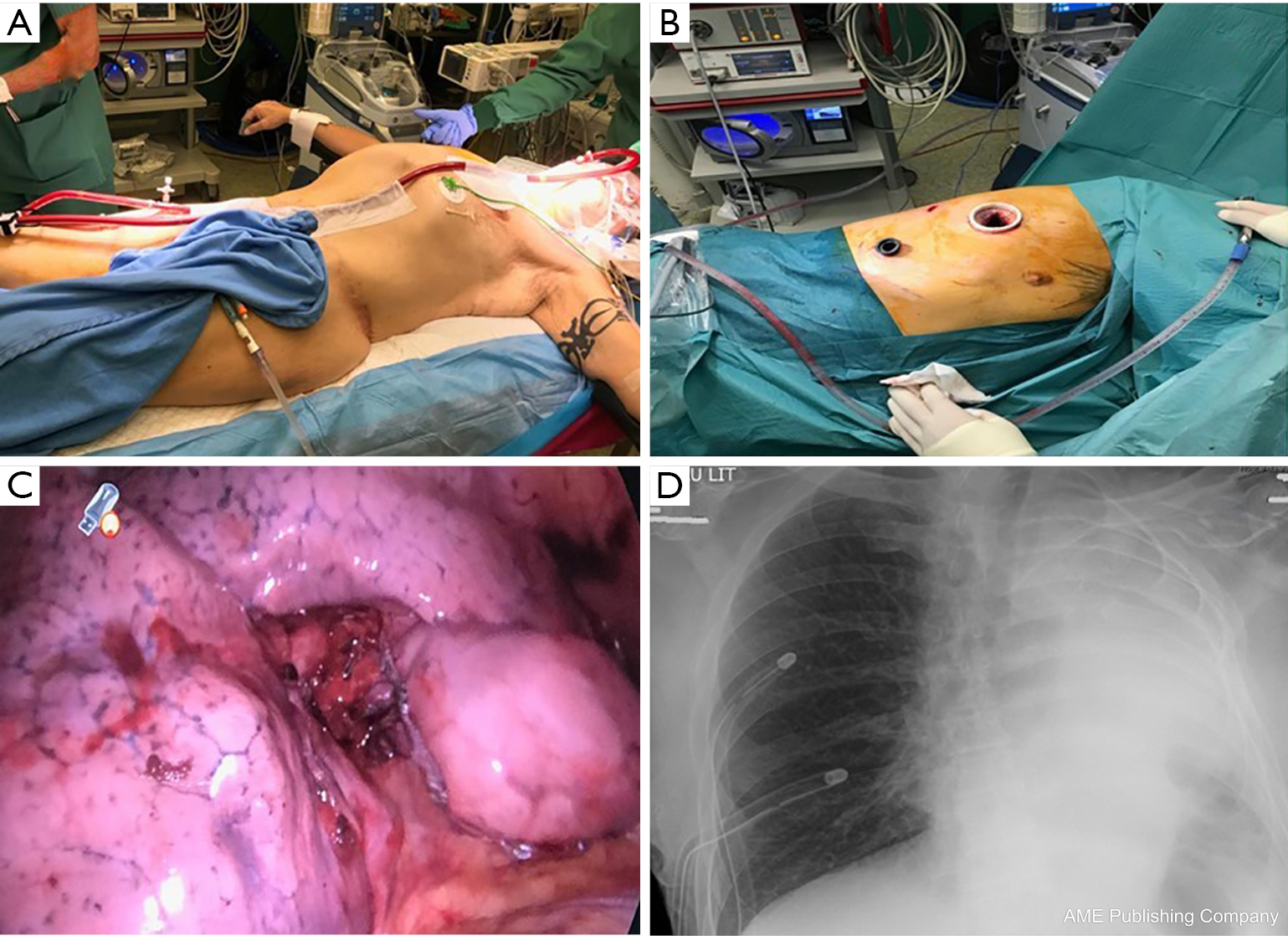 Histopathological analysis revealed two moderately differentiated epidermoid carcinomas (pT3N0L0V0Pn0R0) with no lymph node invasion. The patient is currently undergoing follow-up with no signs of recurrence 24 months after surgery. All procedures performed in studies involving human participants were in accordance with the ethical standards of the institutional and/or national research committee(s) and with the Helsinki Declaration (as revised in 2013). Written informed consent was obtained from the patient.

Patients treated successfully by surgery for NSCLC remain at risk for second MP-NSCLC (1). In previously resected, non-pneumonectomized patients, the surgical management of MP-NSCLC was shown to be worthwhile with excellent survival results (1). In patients who have previously undergone a pneumonectomy, when applying appropriate selection criteria, sublobar resections seem to provide the best long term outcome (54% OS) with a morbidity of 11% (4). However, most pneumonectomized patients do not have functional parameters allowing the consideration of surgery for a MP-NSCLC. Therefore, while retrospective studies have suggested surgical resection to be worthwhile in well selected cases, most patients are managed by SRT.

SRT has become the treatment of choice in patients with localized NSCLCs and bad cardiopulmonary reserve (5). In pneumonectomized patients, there are only retrospective series that suggest that the approach is safe if the target volume is small with a 2-year survival in the range of 40% to 80% (5). It is, in some situations, possible to perform lung SRT in patients with a prior history of mediastinal irradiation (3). However, in the context of pneumonectomy, caution should be taken for this type of approach given that post irradiation pneumonitis can be life threatening (3). In this particular case, care was taken to ensure that the SRT option was well considered. While it would have been possible, our radiation therapy specialists thought it was too risky in regards to the risk of pneumonitis (large irradiation volume because of the dual location) and the close proximity of the myocardium.

To date, surgical approaches of anatomical lung resections in pneumonectomized patients have been reported (6-8). VV-ECMO has allowed to push the boundaries and make the surgeries less invasive and safer. Different approaches using one (Avalon) or two (jugulo-femoral) cannulas were successful with good patient oxygenation and hemodynamic stability during lung resection (6,7). In our case, we chose an approach with two venous cannulas of large diameter permitting sufficient flow. We also had planned to implant an arterial cannula to overcome right ventricular failure that could have occurred with right lung exclusion. Our patient was stable throughout the procedure and the ECMO was weaned and removed at the end of the surgery.

While this case can appear relatively extreme in terms of management, it illustrates the importance of multidisciplinary team management for best therapeutic approaches and long-term outcomes in patients with MP-NSCLC with prior pneumonectomy.

Reporting Checklist: The authors have completed the CARE reporting checklist (available at http://dx.doi.org/10.21037/vats-2020-lm-03).

Conflicts of Interest: The authors have completed the ICMJE uniform disclosure form (available at: http://dx.doi.org/10.21037/vats-2020-lm-03). The series “VATS in Lung Metastasectomy” was commissioned by the editorial office without any funding or sponsorship. MG served as the unpaid Guest Editor of the series. The authors have no other conflicts of interest to declare.