Lung resections are known as effective adjuvant options, when medical treatments fail. This is especially important when the patient has drug resistance and immediately from the time of the drug susceptibility test, doctor thinks about the low effectiveness of anti-tuberculosis drugs. In 2016, the Fox and colleagues showed in the individual patient data meta-analysis that of all surgical methods, it is the pulmonary resection that provides the best treatment result in patients with tuberculosis (1). The clinical efficacy of the anatomical segmental resection for localized forms of pulmonary tuberculosis in TB-surgery has long been known (2).  The main trends in the field of thoracic surgery are the use of minimally invasive approaches to preservation of the functioning pulmonary tissue, to reduce surgical trauma and to improve the rehabilitation of patients after surgery (2-4). Ubiquitous use of thoracotomy for segmentectomies (SE) in the era of minimally invasive surgery leaves more questions than answers today. However, there is no consensus on this issue. The main objective of this paper was to show the effectiveness and safety of the minimally invasive approaches for performing lung segmentectomies in patients with tuberculosis using the experience in our thoracic center.

Timing of surgery, contraindications, perioperative care and postoperative treatment are the same for all pulmonary resections. This strategy is detailed in WHO consensus [2014]. In addition, we believe that the most severe limitations for minimally invasive approaches for segmentectomy in patients with pulmonary TB are: previous surgery (anatomical resection) on the same side and uncertainty about the final volume of the operation (dissemination which requires manual determination of borders of the lung resection) (5).

Retrospective analysis of consecutive patients were operated from 2016 to 2019 years. Two hundred and sixty-two patients were selected for anatomical segmentectomy due to localized TB lesions according to National guideline and WHO consensus statement (5). Demographic parameters and functional status of patients are presented in Table 1 (6). 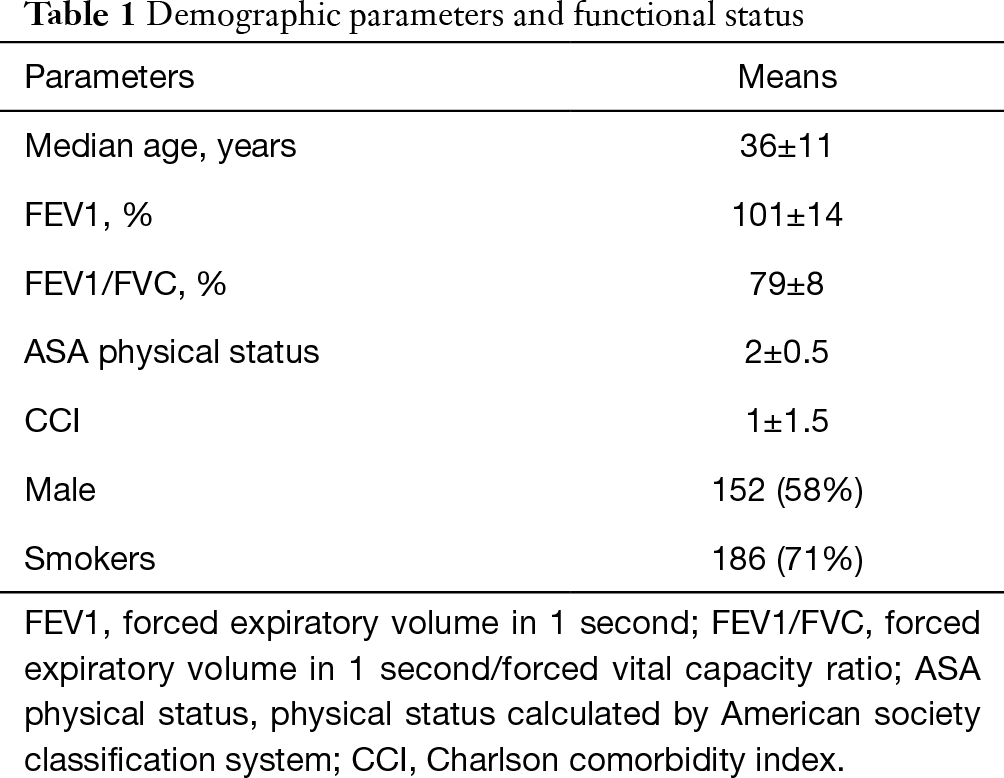 Median duration of preoperative medication treatment was 9.86±5 months. All cases were discussed on multidisciplinary meeting and decision included: indications, volume of surgery and surgical approach (2,7-9). There were three modern approaches used for pulmonary segmentectomies:

The distribution of patients depending on surgical access by years is shown on the Figure 1.

Standard technique of anatomical segmentectomy was used with consecutive isolation and closure of the hilar structures (10). Finding and division of intersegmental plane were performed with inflation/deflation test and with identification of the intersegmental vein.

Retrospective analysis of intraoperative and postoperative parameters was performed.

One hundred and forty-four uVATS anatomical segmentectomies were performed. There were 47 simple (division of the one intersegmental planes) and 97 complex (division of two or more intersegmental planes) segmental resections. The most common uVATS operations were apicoposterior segmentectomy on the both sides. 133 operations (92%) were ended successfully by uVATS and 11 operations (8%) were converted to a thoracotomy. Indications for conversion were: hard pleural adhesions (2 cases), injury of the bronchial structures (2 cases), bleeding from bronchial artery (1 case), perivascular and peribronchial adhesive process (5 cases); video equipment breakdown (1 case). Overall operative time was 168.99±59.10 min, overall intraoperative blood loss –56.74±85.09 mL. Cases with conversion were associated with longer operative time (209.55±68.21 vs. 165.64±57.30 minutes, P=0.023) and higher intraoperative blood loss (120.91±133.97 vs. 51.43±78.18 mL, P=0.039) than successfully uVATS segmentectomy. Learning curve of VATS segmentectomy is shown on the Figure 2.

Learning curve has shown, that overall operative time decreased slowly and gradually with experience. Nevertheless, rate of conversions to a thoracotomy was higher between 25th and 65th operations after learning basic skills of uniportal uVATS technique. Next increase in the conversion rate was after 100th operation. It could be due to wider spreading of technology and reduced preoperative selection of patients.

Difficulties with isolation of the hilar structures or adhesiolysis on the first time after beginning could be solved minimally invasively in some cases, but sometimes they require thoracotomy. Radiological finds such as emphysema and bullous changes (11), adhesions in the pleural cavity, incompleteness of interlobar fissures (12), fibrotic changes in the hilum were factors which directly increased of operative time and blood loss (Table 3). 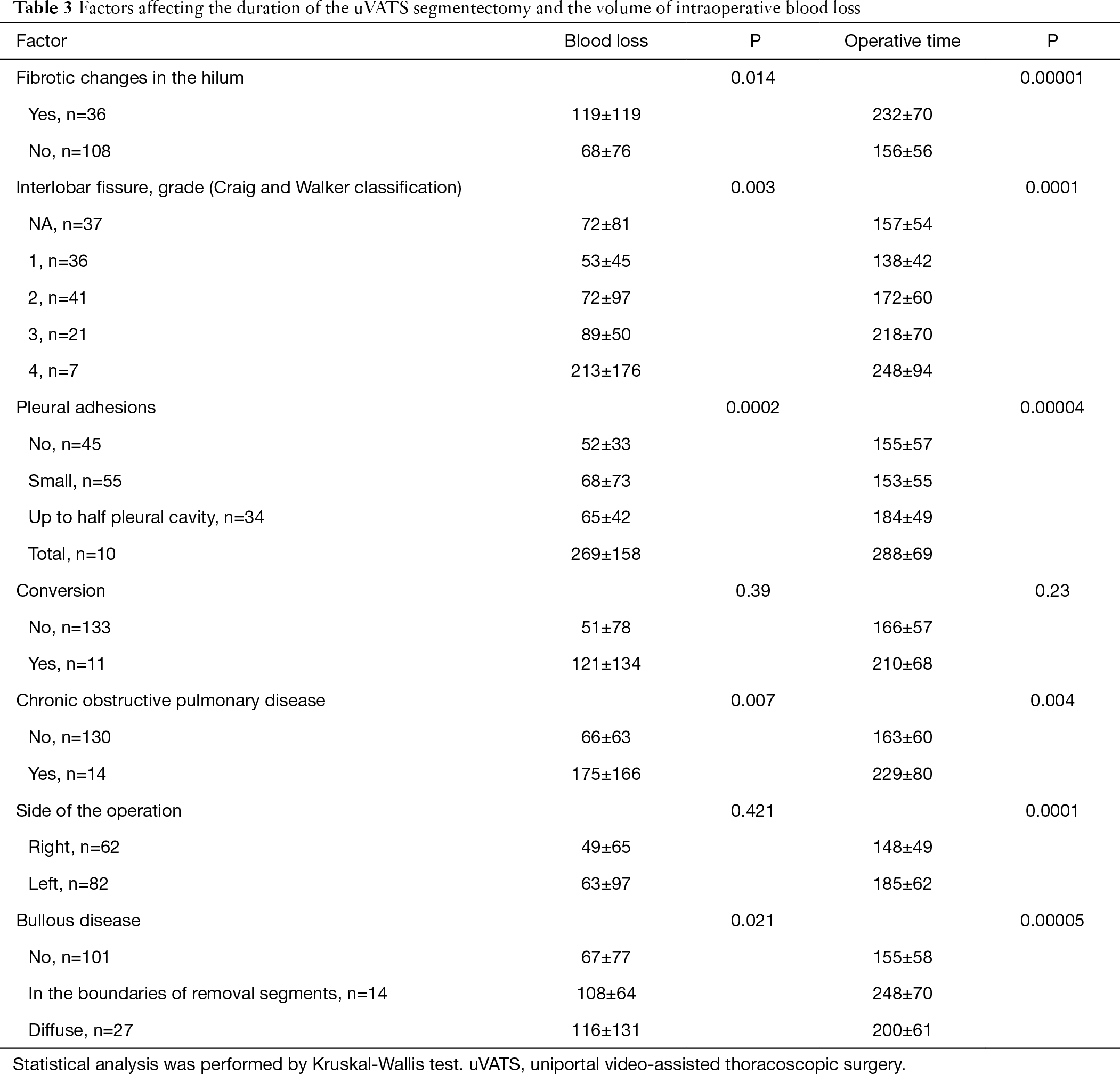 Major postoperative complications (13) after uVATS segmentectomy were in 21.5% (31 cases). In general, they were presented by pulmonary (partial atelectasis treated by bronchoscopy) and pleural (prolonged air leak) complications. There was no perioperative mortality.

Preoperative characteristics (demographic data, comorbidities, radiological findings and bacteriological characteristics) were comparable between uVATS and open segmentectomy groups. Perioperative results of 144 uVATS and 110 open segmentectomies were investigated. There were no significant differences in demographic and functional parameters, disease characteristics (forms of tuberculosis, duration of treatment, bacteriological data) and volume of surgery between the groups. Results of compare two groups are presented in the Table 4.

Overall operative time was the same in uVATS and open groups. The volume of intraoperative blood loss was larger in open group which is logically justified by a larger operating trauma and length of incision. Duration of pleural drainage, duration of air leak and postoperative hospital stay were the same in both groups. The assessment of postoperative pain was performed according to narcotic analgetics intake. This parameter was significantly less in uVATS group. Postoperative hospital stay did not differ depending on surgical access. The most of patients from both groups were discharged to sanatorium for prolongation of anti-tuberculosis treatment. Postoperative morbidity (major complications) was less in uVATS group also (21.5% vs. 36.1% in uVATS and open groups respectively, P=0.015). Kinds of complications are shown in Table 5.

Initial experience of RATS segmentectomy includes 10 patients with localized forms of pulmonary tuberculosis. The operation time for segmentectomies ranged from 65 to 320 min, intraoperative blood loss—from 10 to 200 mL.  Two patients (20%) were undergoing conversion to a thoracotomy due to the bleeding (single case of endoscopic stapler breakdown during apicoposterior right segmentectomy, blood loss was 1,200 mL) and injury of the segmental bronchus (apicoposterior left segmentectomy in patient with bronchi nodular fistula). In these group two patients (20%) had a major complication like prolonged air-leak. This complication was treated with additional chest tube in the first case and with endobronchial valving in another case. It was a small group, so it was impossible to adequately compare it statistically with uVATS and open groups. Most of the operations were performed in the early stages of development of robotic technology. Nevertheless, we are confident that future research will show better results for this modern approach.

In addition to perioperative results, we obtained data in the study of specimen. Bacteriological and morphological studies were performed. Moreover, in all cases, the diagnosis was confirmed. During bacteriological examination, 13% of patients (n=35) showed amplification of MTB drug resistance. Thus, patients received a chance for an adequate selection of therapy after surgery.

History of thoracoscopy has begun from tuberculosis cases (Jacobeus, 1910). Nevertheless, tuberculosis is the rare indication for VATS anatomical pulmonary resections  today (14). Few surgeons had effective attempts to use mini-thoracotomy for the same purposes, but use of a retractor refutes the current principles of thoracoscopy. It is well known that VATS lung resections are accompanied by less pain, which is confirmed in our study with significantly less use of narcotic analgesics after uVATS (3,4). There are small series of minimally invasive segmentectomies for pulmonary TB with a high incidence of intra- and postoperative complications in a current literature  (11,14-18). Overall operative time of uVATS segmentectomy in our trial was similar to the time in most published series (Table 6) (3,19-21).

Simple segmentectomies have been often performed by VATS. According to the literature, complex segmentectomies are technically demanding with a longer operative time and a higher postoperative morbidity. Our trial showed that uVATS complex segmentectomy for pulmonary tuberculosis is feasible, and is characterized by the same duration of surgery, volume of intraoperative blood loss and morbidity (22). Tseng and coauthors in comparative analysis of uVATS segmentectomy versus open segmentectomy in 2018 showed the advantages of minimally invasive approach. The authors did not reveal significant differences in the duration of the surgery, but VATS segmentectomy was accompanied by less volume of blood loss and a longer hospital stay. Noteworthy, the most common complication was bronchopleural fistula in 6 cases, more often in the group after access conversion (9). Major complications were found in 21.5% of patients in our series of 144 uVATS segmentectomies, and bronchopleural fistulas have not been found. uVATS versus open segmentectomy is characterized by a comparable duration of the surgery, less volume of blood loss, less pain level and morbidity. Morphological irreversible changes in the lung and pleura after long tuberculous inflammation were not contraindications for uVATS. Nevertheless, these factors are accompanied by an increase of the duration of surgery and higher volume of blood loss. It is necessary to conduct an adequate comparison of RATS with open and VATS segmentectomies on comparable material for future research. Undoubtedly, it is necessary to study the long-term outcomes for a comprehensive assessment of the effectiveness of minimally invasive anatomical segmental resections in complex treatment of pulmonary TB.

Minimally invasive segmentectomy is effective and safe procedure in the complex treatment of localized forms of pulmonary tuberculosis. The main advantages of uVATS approach are less blood loss during surgery; less consumption of narcotic analgesics and a lower incidence of complications after surgery. Additional studies are required in the field of comparing RATS with uVATS and open segmentectomy for tuberculosis.

Conflicts of Interest: All authors have completed the ICMJE uniform disclosure form (available at http://dx.doi.org/10.21037/vats-19-69). The series “Robotic Segmentectomies” was commissioned by the editorial office without any funding or sponsorship. The authors have no other conflicts of interest to declare.