Segmentectomy has been subject to much oncological controversy. Despite this, due to flaws in the original Ginsberg trial, mounting evidence suggests that for the correct patient and indication it can have equivalent oncological benefit to lobectomy. So far, however, this evidence is limited to systematic review and meta-analysis of mainly retrospective data or prospective cohorts (1). Two controlled trials are due to report imminently on 1,106 patients with <2 cm and 697 patients with T1a non-small cell lung cancer randomised to lobectomy versus segmentectomy. Both have already reported perioperative safety outcomes with a longer air leak being the only significantly more common complication of segmentectomy in the Japanese trial (2,3). In their wake a further multi centre trial has begun in the USA in 2015 but the final outcomes for this are projected in 2031 (4). Despite this paucity of quality data, segmentectomy remains a recommendation in international guidelines in selected patients (5-7).

The purported benefits are for patients with poor lung function unable to tolerate lobectomy. The reduction in post-operative lung function is thought to be significantly less, as is the effect on post-operative exercise capacity (8,9). Thus allowing an increased resection rate in a group of patients previously deemed unfit (10).

With the results of the National Lung Screening Trial has come the introduction of lung cancer screening programmes across the world (11). This is projected to lead to an increase in the number of detected lesions which are small in size and carry diagnostic uncertainty. Segmentectomy has been touted as a means of diagnosis and cure in these early stage, screen detected lesions.

The benefit of thoracoscopic surgery has been shown in lobectomy in large propensity matched studies and meta-analyses with shorter hospital length of stay, pain and perioperative morbidity/complications (12-16). This theory of minimally invasive surgery has been extrapolated further into uniportal surgery i.e., minimise the number and size of incisions for further benefit to the patient’s recovery. Whilst this theoretical benefit has not been proven in large studies, multiple suggest it is non inferior in terms of oncological outcome—completeness of resection and lymph node dissection or safety (17).

Minor thoracic surgery procedures have been reported in the literature beginning in 1998 with Yamamoto’s publication of pneumothorax surgery through a single axillary incision (18). As technology progressed, with the increasing uptake of all VATS surgery, so did the ability of surgeons to perform more complex uniportal procedures. This culminated in the first uniportal VATS lobectomy at La Coruna Hospital in June 2010 (19). Since then the complexity of surgery available to the skilled uniportal VATS surgeon has grown to cover almost all the thoracic surgical repertoire and uniportal VATS is practised worldwide. The first reported uniportal VATS segmentectomy was of the S6 segment in combination with the Right Upper lobectomy also in Coruna Hospital, Spain in 2012 (20).

As technology advances so does the ability of the surgeon to perform more complex procedures safely and with good outcomes. In VATS segmentectomy in particular the most important advances have been in imaging, localisation techniques and instrumentation/operative technology.

With improvements in imaging and software the surgeon now has access to the individualised precise anatomy of the patient from the comfort of the computer chair. Less anatomical “surprises” reduce complications and technical difficulties intraoperatively. 3D reconstruction of CT scans showing the exact segmental anatomy of bronchi and vessels is enabling surgeons to plan more complex procedures. Where previously this was limited by time intensity for the radiologist and expensive, cumbersome software, newer programs allow surgeons to quickly reconstruct images themselves. Aside from assessment of vessel/bronchus anatomy, it is proposed to improve assessment of the lesion distance from the intersegmental planes, thus improving the oncological success of operations (21,22). 3D Printing of the precise patient segmental anatomy, in selected cases, can assist surgeons in physically planning an operation, using materials of a similar consistency to improve intraoperative confidence (23).

Segmentectomies are being touted for the very same small lesions that can be difficult to find during VATS surgery and even open bimanual palpation. Thus the utilisation of localisation markers, mechanical (hookwires, coils) and chemical (methylene blue, indocyanine green, radioactive markers) with the added benefit of a hybrid theatre, has reduced surgical conversion rates and improved theatre efficiency (24).

Techniques to delineate the vascular segmental planes, such as indocyanine green injection, help the surgeon perform a more accurate anatomical resection without the difficulties inflation/deflation of the lung can cause (25).

❖ Tumour plus circumferential margin of greater than size of tumour completely contained within anatomic boundaries of segment;

We recommend this in high risk patients (borderline performance status/poor lung function), pure GGOs <2 cm or in patients where metastasectomy cannot be completed as a wedge resection with adequate margins.

After induction of general anaesthesia and confirmation of single lung ventilation, preferably via double lumen endotracheal intubation, the patient is turned to the corresponding lateral decubitus position. Some units are now routinely performing uniportal VATS segmentectomies through non intubated anaesthesia with good results and a reduction in anaesthesia related complications (26,27).

Flexion of the table at the level of the xiphoid process, or a soft bolster to achieve the same effect, helps to widen intercostal spaces and move the hips of the patient to allow for easier instrumentation (Figure 1). 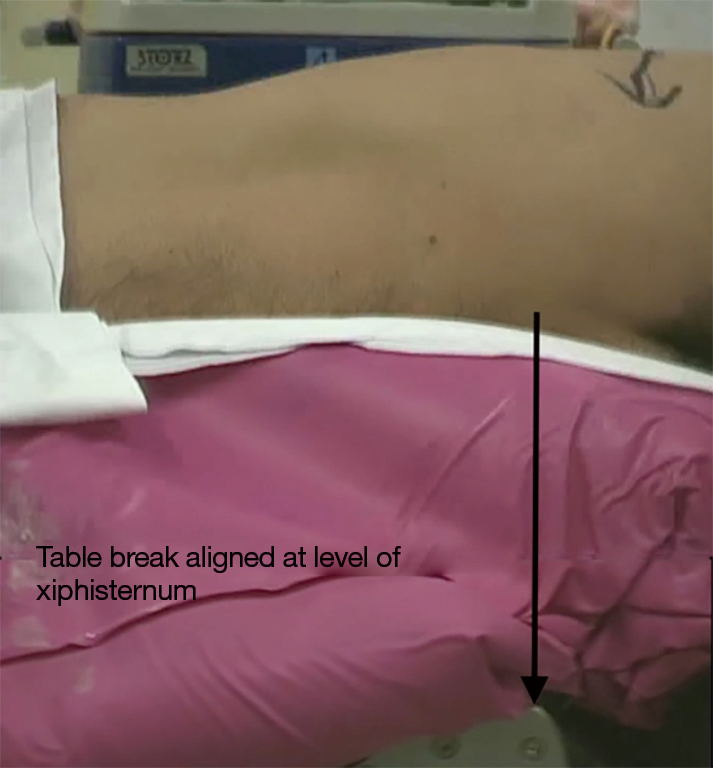 The shoulder should be anteriorly flexed and the arm bent at the elbow so that there is space for the operator. It can be supported with a padded armrest. A combination of soft rolls, beanbag and strapping are used to secure the patient on the table.

Surface markings of the inferior tip of the scapula, subxiphoid process, anterior border of latissimus dorsi and lateral margin of the breast in women are noted (Figure 2). Intercostal spaces are counted from 2nd down or from costal margin upwards. It is strongly recommended that the positioning is done in a similarly precise manner on every occasion to give the highest chance that the incision’s location is correct. 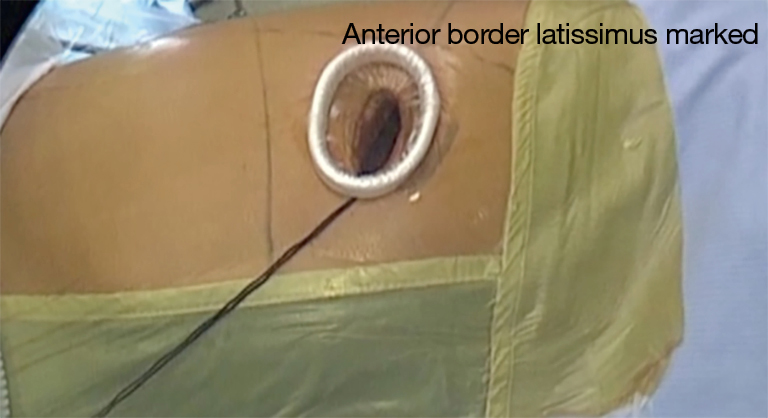 Figure 2 Incision position on a draped patient with wound retractor in situ.

A 3–4 cm incision should be placed between the anterior and posterior axillary lines as per the Uniportal VATS Interest Group (UVIG) consensus statement (28). The space recommended for each segment, either the fourth or fifth intercostal space, will be described below. During left uniportal VATS a more lateral port position will help instruments avoid the heart during insertion. Placing the port in the same place each time during the learning curve will help develop skills faster.

The surgeon stands at the front of the patient with the scrub nurse standing at the back. The assistant can be positioned at the front or back—though most commonly this is anterior of the patient (28-30). When working in the lower half of the thorax we recommend the assistant being on the left side of the surgeon and vice versa. The screens should be positioned for surgeon and assistant comfort.

Wound protector use is recommended for easier insertion of instruments, reduced soiling of the camera and to prevent wound contamination (28,30). A 5 or 10 mm 30 degrees scope is recommended and should always be kept in the lateral/uppermost portion of the wound, creating a space below for bimanual instrumentation (29,30). It is essential that the assistant retract the lung with one hand and hold the camera ideally in the dominant hand in a comfortable position.

Energy devices are described in the literature as being used for dissection and division of smaller pulmonary artery and vein branches (<7 mm) (31). In our experience, for safety reasons, we recommend the use of a polymer clip proximally or a tie when the diameter of the vessel is more than 5 mm. For the distal part of the vessels we normally prefer the use of energy devices (a distal clip could interfere with stapler firing during the intersegmental plane division). The authors find that, with practice, once a certain level of expertise is reached, energy devices can help to reduce operating time by increasing the surgeon’s efficiency during dissection.

The benefit of instruments designed specifically for uniportal VATS cannot be understated. At the authors’ institutions the basic instruments used for a standard segmentectomy will be a long curved suction, a distally articulating lung grasper and an energy device being used for the majority of dissection.

Curved tip stapler technology is useful for all components where branches are small and angles awkward.

The table should be moved to assist exposure—e.g., patient tilted posteriorly when exposing anterior mediastinal pleura. Reverse Trendelenberg for the majority of procedures is helpful unless dissecting the inferior pulmonary ligament/vein.

The segmental vein, artery and bronchus should be individually dissected, taking care to always include the stumps of these three structures in the segmental resection (29,30).

Before dividing the bronchus, clamp the segmental branch and check insufflation with the anaesthetist to ensure the resection segment remains collapsed and all others inflate. 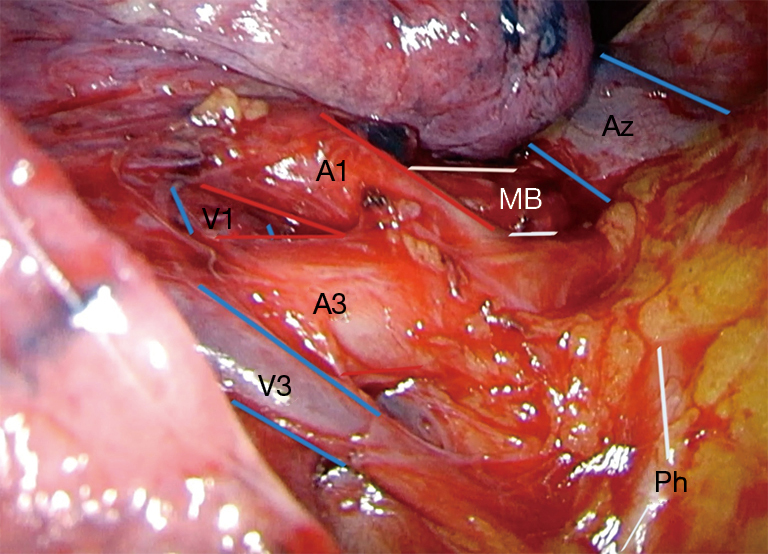 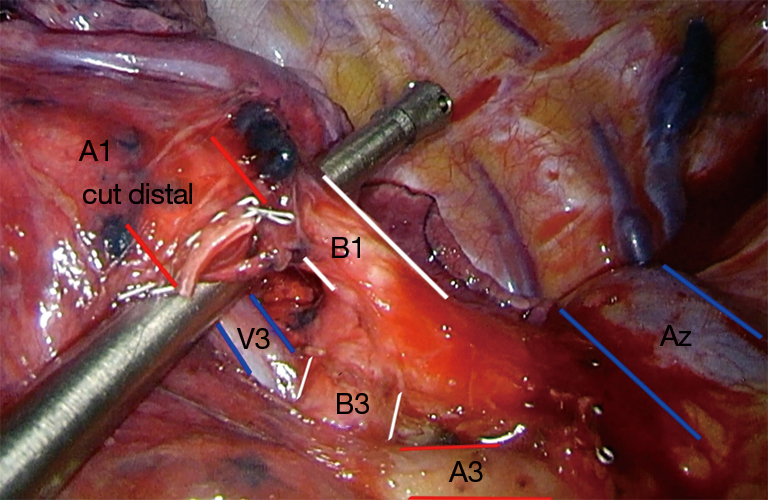 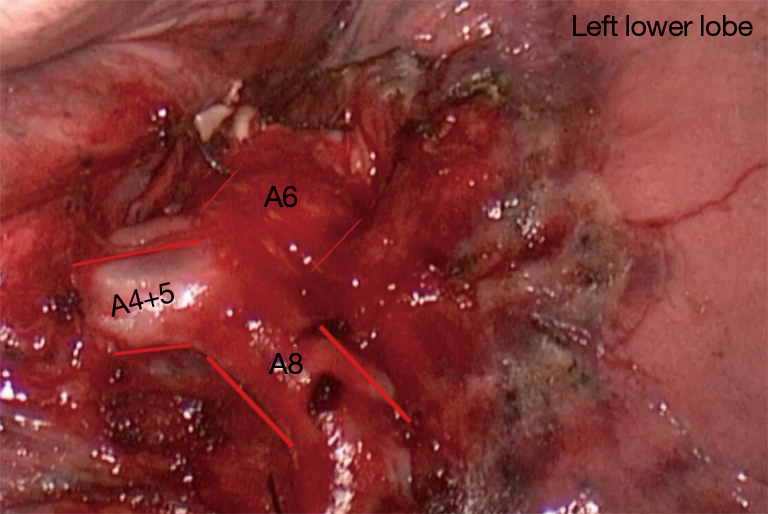 As the results of the two segmentectomy in Stage 1 lung cancer trials are eagerly awaited, the drive for the ideal surgery that has the lowest perioperative risk, impacts the lives of patients the least functionally and provides the best oncological outcomes continues. Uniportal VATS segmentectomy, from its early inception, has been part of that drive. With continuing technological improvements and a large network of supporting surgeons, its techniques continue to be optimised as it moves to become part of routine lung cancer surgery.

Provenance and Peer Review: This article was commissioned by the Guest Editor (Hitoshi Igai) for the series "Uniportal VATS Segmentectomy" published in Video-Assisted Thoracic Surgery. This article has undergone external peer review.

Conflicts of Interest: All authors have completed the ICMJE uniform disclosure form (available at http://dx.doi.org/10.21037/vats.2020.02.05). The series “Uniportal VATS Segmentectomy” was commissioned by the editorial office without any funding or sponsorship. DGR serves as the unpaid editorial board member of Video-Assisted Thoracic Surgery from Jun 2019 to May 2021. The other authors have no other conflicts of interest to declare.