Video-assisted thoracic surgery (VATS) is a well-established and potentially standard modality for various thoracic diseases (1). Recently, uniportal VATS (U-VATS) has become a sophisticated and widespread surgical method for various thoracic diseases as a minimally-invasive VATS. The safety and efficacy of U-VATS compared to multi-portal VATS have been confirmed by multiple reports using a propensity match procedure, prospective randomized trial, or systematic review and meta-analysis (2-4). A spontaneous pneumothorax is a major and frequently recurrent complication in patients with Birt-Hogg-Dubé syndrome (BHDS) because of widespread multiple lung cysts (5,6), which cannot be entirely removed surgically. Recently, 4-port total pleural covering (4P-TPC) was reported as a new surgical procedure that covers the entire surface of the lungs with sheets of oxidized regenerated cellulose (ORC) and successfully eliminates recurrence of post-operative pneumothoraces in BHDS patients (7). These sheets reinforce the total pleura through pleural thickening (7,8). Initially, this procedure needed 4-port video-assisted thoracic surgery (4P-VATS); however, given the advances in U-VATS techniques and instruments in recent years, U-VATS TPC has become feasible. We report a case of a secondary pneumothorax in a patient with BHDS who was successfully treated by U-VATS TPC with ORC mesh.

The patient was a 45-year-old woman with a history of recurrent pneumothoraces (at least 3 in the left and 2 in the right). A 3-port VATS partial resection of the left upper lobe without TPC was performed for a left spontaneous pneumothorax at 34 years of age. Unexpectedly, her younger brother had bilateral pneumothoraces due to multiple lung cysts, which led to a definite diagnosis of BHDS based on genetic testing of the folliculin gene (FLCN), which showed insertion of CCACCCT in exon 12 of the FLCN gene. Based on the modified Menko’s criteria for BHDS (9), she was diagnosed clinically with BHDS and underwent 4P-VATS TPC for a right pneumothorax at 42 years of age and has had no post-operative recurrences of the right pneumothorax thus far. Unfortunately, she had a post-operative recurrence of the left pneumothorax following the 3P-VATS partial resection without TPC. A chest CT scan showed a left pneumothorax with pleural adhesions that were attributed to the first VATS 11 years ago (Figure 1A). The CT scan also showed bilateral, multiple, and irregular-shaped cysts of various sizes (Figure 1B,C). Because she had a family history of BHDS and multiple lung cysts (5,6,10), she was clinically diagnosed with BHDS again according to modified Menko’s criteria (9) and underwent U-VATS TPC under general anesthesia with one-lung ventilation. With respect to the U-VATS TPC procedure, a 5-cm incision was made in the middle axillary line of the 6th intercostal region and a wound retractor (Alexis® Wound Protector/Retractor S; Applied Medical, Rancho Santa Margarita, CA, USA) was applied for the single port. Initially, an adhesiotomy using an ultrasonic scalpel (Harmonic®; Johnson and Johnson, New Brunswick, NJ, USA) was performed, followed by partial resections of the upper and lower lungs using a surgical stapling device (Endo GIA® Purple 45-mm with Tri-Staple® Technology; Medtronic, Minneapolis, MN, USA) and ligations of the affected lungs using a PDS II thread (ENDOLOOP® Ligature; Johnson and Johnson). Additionally, ablation of several small cysts and confirmation of no air leakage were performed. Four sheets of an absorbable suture reinforcement felt made of polyglycolic acid (Neoveil® sheet; Gunze Limited Medical Division, Tokyo, Japan), 5 cm ×5 cm each in size, were applied to the new staple line, ablated cysts, and ligated area. Finally, TPC consisted of totally enclosing the entire surface of the fragile lungs with multiple lung cysts on the surgical side with 10 sheets of ORC mesh (Ethicon Surgicel Absorbable Hemostat Gauze; Johnson & Johnson), followed by 6-mL drop of fibrin glue (Beriplast® P Combi-Set Tissue adhesion; CSL Behring, King of Prussia, PA, USA). After the TPC procedure, a 20-Fr drainage tube was placed into the apex of the thoracic cavity. Careful inspection confirmed that the ORC-covered lungs were fully expanded (video 1) as in the same TPC procedure previously reported (7). The chest drainage tube was removed on the 4th post-operative day and the patient was discharged from the hospital on the 6th post-operative day. Histologic examination of the resected specimen showed multiple sub-pleural cysts that were considered to be consistent with BHDS (Figure 2A,B). The post-operative course was uneventful. Approximately 3 months after the TPC, a chest radiograph showed no recurrence of the pneumothorax with good expansion of the left covered lungs (Figure 3). The post-operative spirogram showed a normal vital capacity, forced vital capacity, forced expiratory volume at one second, and diffusing capacity of the lung for carbon monoxide (Table 1). 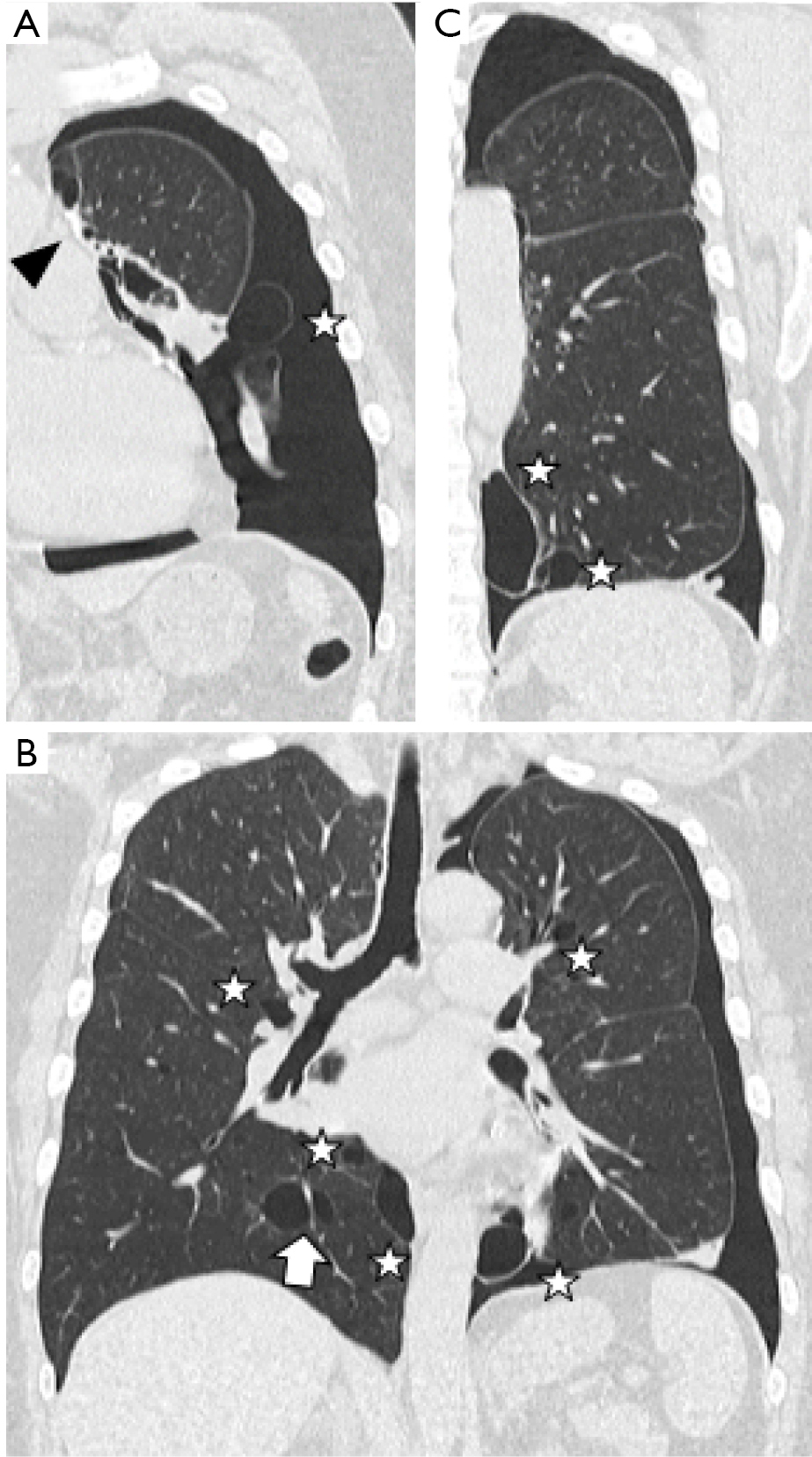 Figure 1 Pre-operative imaging of a 45-year-old woman. Chest computed tomography (CT) shows the left pneumothorax with pleural adhesions between the upper lobe and the anterior mediastinum adjacent to a stapling line (an arrowhead) owing to partial resections using surgical stapling devices 11 years ago (Figure 1A). The CT scan also showed multiple, irregular-shaped cysts of various sizes with a lower medial zone predominance. Additionally, cysts abutting or including the proximal portion of lower pulmonary arteries and veins (Figure 1B: an arrow), and numerous cysts abut to the inter-lobar region, mediastinum, and diaphragm (Figure 1A,B,C: stars).

Figure 2 Histopathologic findings. In the hematoxylin and eosin (HE)-stained specimen of the affected lungs, several sub-pleural cysts show focal multi-loculation with thin fibro-vascular septa (Figure 2A: an arrow) and the septum indicates epithelial lining of the bilateral surface (Figure 2B: arrowheads), which was considered to be consistent with BHDS. BHDS, Birt-Hogg-Dubé syndrome. 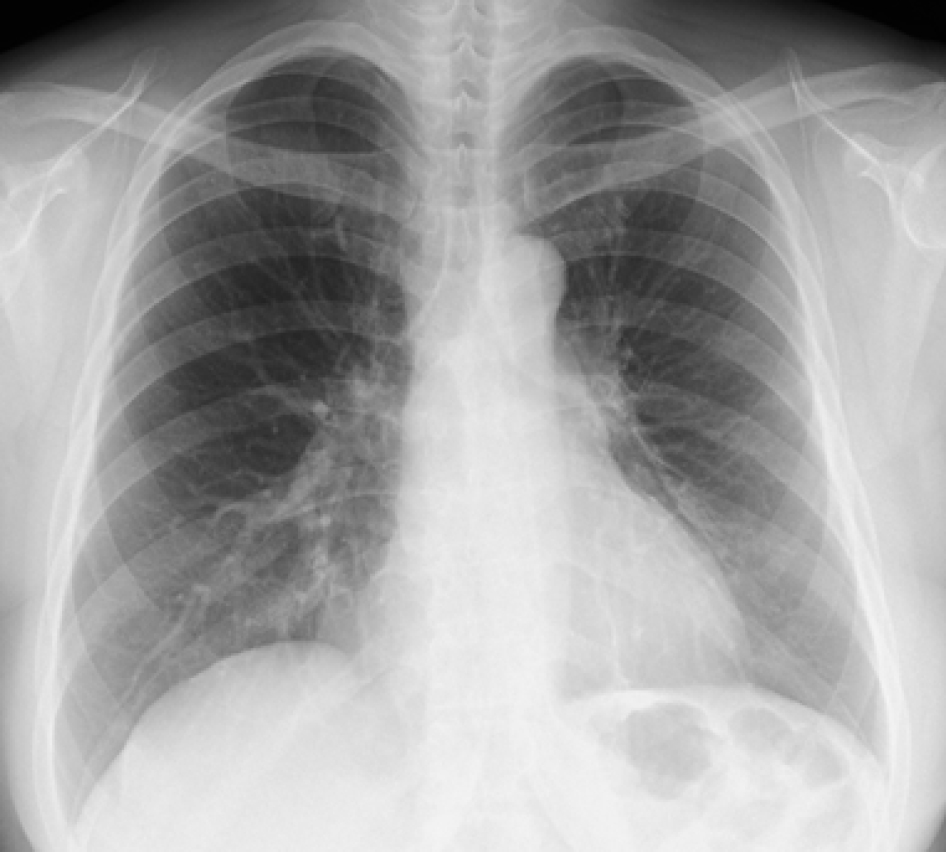 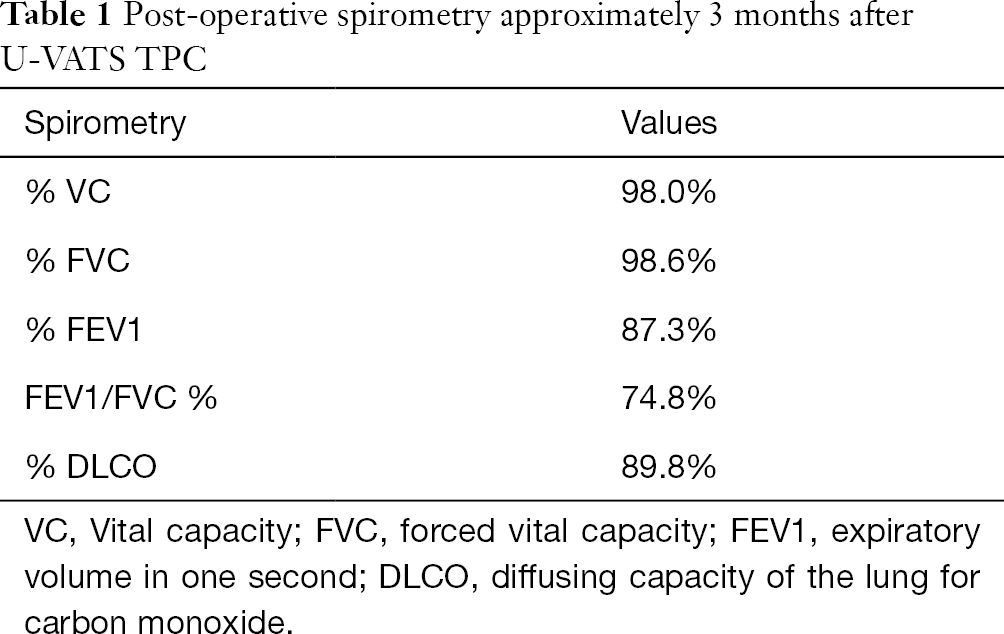 We report a case of a secondary pneumothorax because of multiple lung cysts in a patient with BHDS who was successfully remedied by U-VATS TPC. U-VATS potentially damages only one intercostal region and has been reported to minimize post-operative thoracic pain in addition to the cosmetic advantage (4). Recently, U-VATS has been applied to various general thoracic surgical procedures; thus, the surgical indications have been extended (11). The patient in this case report had minimal post-operative pain without the need for epidural anesthesia or analgesics, resulting in patient satisfaction during the post-operative course and with the single incision. In contrast, post-operative discomfort due to the chest drainage tube existed; however, it resolved after removal of the chest tube. On the 7th and 30th post-operative days, the patient had no pain or discomfort and required no analgesics.

The BHDS is a rare inherited autosomal dominant genodermatosis caused by a germline FLCN mutation that was first reported in 1975 and 1977 (12,13). The three major manifestations of BHDS have been reported to be fibrofolliculomas and trichodiscomas of the skin, renal tumors, and multiple lung cysts (14). The numerous lung cysts are predominantly located in the middle-to-lower lung fields abutting to both the mediastinum and diaphragm, and interlobar area of the BHDS-affected lungs (5,6,10). In addition, the cysts are thin-walled, round-to-oval in shape, of various sizes, and often about the peripheral pulmonary vessels (5,6,10). These unusual features of BHDS cysts make standard surgery for pneumothoraces, which consists of resection and/or ligation of bullae, remarkably difficult. Accordingly, pneu­mothoraces in patients with BHDS are prone to recur (15).

Recently, we published a paper describing the successful prevention of recurrent pneumothoraces in a patient with BHDS using 4P-TPC (7). Ebana et al. (8) reported that an ORC mesh covering causes pleural thickening via the mesothelial-mesenchymal transition mechanism. A Gynecare Interceed Absorbable Adhesion Barrier (Johnson & Johnson), which is composed of the same material as ORC mesh, is indicated as an adjunct to gynecologic pelvic surgery for reducing the incidence of post-operative pelvic adhesions. Indeed, U-VATS TPC may facilitate the prevention of post-operative recurrences of pneumothoraces and adhesions in the thoracic cavity as a minimally-invasive procedure.

Menko and colleagues (9) reported the diagnostic criteria for BHDS, including 2 major criteria and 3 minor criteria; BHDS patients should fulﬁll one major or two minor criteria to establish the diagnosis. The major criteria consist of the following: (I) at least ﬁve ﬁbrofolliculomas or trichodiscomas, with at least one histologically-conﬁrmed, of adult onset; and (II) a pathogenic FLCN germline mutation. The minor criteria consist of the following: (I) multiple lung cysts (bilateral basally-located lung cysts with no other apparent cause), with or without a spontaneous primary pneumothorax; (II) renal cancer of early onset (<50 years), multifocal or bilateral renal cancer, or renal cancer of mixed chromophobe and oncocytic histology; and (III) a ﬁrst-degree relative with BHDS (9). The patient in this case report was diagnosed clinically with BHDS because she fulfilled the #1 minor and #2 major (partially) criteria (i.e., a second-degree relative of a younger brother who was definitely diagnosed with BHDS based on a FLCN mutation).

We have presented a case of recurrent pneumothoraces associated with BHDS who was successfully treated with U-VATS TPC. Clinicians should be aware of BHDS in the treatment and follow-up of patients with multiple pulmonary cysts and a secondary pneumothorax.

Conflicts of Interest: All authors have completed the ICMJE uniform disclosure form (available at http://dx.doi.org/10.21037/vats.2020.03.02). TM served as an unpaid editorial board member of Video-Assisted Thoracic Surgery from Aug 2019 to Jul 2021. The authors have no other conflicts of interest to declare.

Ethical Statement: The authors are accountable for all aspects of the work in ensuring that questions related to the accuracy or integrity of any part of the work are appropriately investigated and resolved. All procedures performed in studies involving human participants were in accordance with the ethical standards of the institutional and/or national research committee(s) and with the Helsinki Declaration (as revised in 2013). Written informed consent was obtained from the patient for publication of this manuscript and any accompanying images.