The advent of uniportal video-assisted thoracic surgery (uVATS) lobectomy in 2010 polarised the surgical community. Although it promises the least access trauma of any minimally invasive thoracic surgical approach to date, critics argue that oncological clearance may be compromised by inadequate exposure and suboptimal nodal staging. The same doubts once cast on multiportal VATS (mVATS) for resectable non-small cell lung cancer (NSCLC) in decades past have been revisited with uVATS. In this article, the state of evidence regarding oncological clearance of uVATS is examined and directions for the future are explored.

VATS is the term encompassing thoracic operations performed via small incisions with purely endoscopic visualisation of intrathoracic viscera. In contrast, open lobectomy is performed under direct vision through a large thoracotomy. The muscle splitting, rib cutting and spreading required to gain access to the pleural cavity by the open approach often result in chronic pain, shoulder dysfunction and disability (1). The access trauma incurred and the resultant systemic inflammatory response syndrome (SIRS) is usually severe. VATS not only reduces pain and disability, but also could limit the magnitude of SIRS. This is hypothesised to reduce postoperative disturbances in cellular and humoral immunity and prevent an environment which could favour tumour micrometastases (2-4). Thus, reducing the incision length may potentially not only reduce pain, but also reduce immune dysfunction and possibly risks of disease recurrence. To evolve from multiportal to uniportal VATS could be an approach to benefit from such access trauma reduction. There is early data to suggest that uniportal VATS may be associated with an attenuated post-operative immunochemokine response compared with multiportal, however more studies are need to confirm this and to investigate its clinical significance (3).

In the minds of many, a reduction in port or ports usually equate to limited access and maneuverability of the surgical instruments. However, since the emergence of uniportal VATS for major lung resection almost a decade ago, we have seen a rapid development in instruments and surgical technique (5). There is no doubt that evolution from triportal to uniportal requires the surgeon to adapt to new planes of visualisation and instrumentation (6,7). An understanding of the stepwise geometric basis of evolution of VATS approaches can help dispel misconceptions that visualisation and instrumentation is restricted when the converse may hold true (8,9).

In the biportal approach, the posterior port is eliminated, and the anterior port is a utility mini-thoracotomy incision with passage of multiple instruments. This has a number of important implications for the surgeon. First, the plane of instrumentation is translated from a horizontal, caudocranial perspective to a vertical, anteroposterior perspective. Second, curved instruments may be required in order to reach the whole thoracic cavity and to minimise fencing. Third, crossing manipulations are required to bring about effective traction-countertraction, and these maneuvers require transferring the effective fulcrum of instrumentation inside the chest cavity. Finally, the plane of instrumentation now runs perpendicular to the plane of visualization, hence could lead to more significant hand-eye inconsistency which may be difficult to overcome.

In the uniportal approach, the inferior thoracoscopy port is eliminated, and the anterior incision must now also encompass the thoracoscope. The plane of visualization is also translated to a vertical anteroposterior perspective, same as for the plane of instrumentation. The axes of thoracoscopic view and instrumentations thus become parallel. This simulates direct vision in a thoracotomy, and hand-eye inconsistency is minimized (8,9). It is interesting to note that it may be for this reason numerous centres have adopted the uniportal VATS approach directly from open surgery without transitioning through multiport VATS (11).

Anatomical complete resection and mediastinal lymph node dissection that allow accurate pathological staging offers the best chance of cure for medically operable patients with resectable early-stage non-small cell lung cancer. The oncological clearance of lung cancer surgery very much hinges on the completeness of mediastinal lymph node staging. A point of contention for oncological clearance of any minimally invasive approach is whether differences in instrumentation and surgical technique hinders adequate nodal harvesting and thus the opportunity for nodal upstaging. With a reported incidence of nodal upstaging varying from 9% to 24%, a substantial portion of patients with pathological node-positive disease may benefit from adjuvant therapy if they are not understaged by suboptimal lymph node harvesting (12).

There is no consensus on the definition of a complete mediastinal lymph node staging. The 2019 National Comprehensive Cancer Network (NCCN) guidelines recommend either sampling at least three N2 stations or complete lymphadenectomy. Although mediastinal lymphadenectomy can theoretically identify more skip metastatic lesions and occult lymph node metastases, whether it leads to improved survival remains controversial (13).

In a 2017 analysis of large-scale Chinese and US multi-institutional databases, a greater number of examined lymph nodes positively correlated with more stage migration and better overall survival in patients with node-negative disease. The cutoff was calculated to be sixteen examined nodes (14). To implement this metric in practice, surgeons should adhere to a stringent protocol for intraoperative nomenclature and enumeration of lymph nodes, as fragmentation may over-estimate the number of nodes harvested (15). This cutoff may allow for an additional metric for a more confident declaration of pathological node-negative disease, and could give the surgeon and the patient greater reassurance.

To ascertain the state of the evidence regarding oncological efficacy of uVATS, the authors searched Medline and EMBASE using the strategy listed in the International Society for Minimally Invasive Cardiac Surgery (ISMICS) expert consensus statement on “Optimal Approach to Lobectomy for Non-Small Cell Lung Cancer: Systematic Review and Meta-Analysis” (16).

From January 2000 to October 2019, twenty-three articles comparing mVATS and uVATS were identified. Two studies were excluded from the current discussion because they did not report any oncological outcomes. The twenty-one remaining studies, involving 3,737 mVATS patients and 2,165 uVATS patients in total, were all retrospective in nature (10,17-36). Propensity score matching was performed in ten studies. Except for one conference abstract, the other articles were published in peer-reviewed journals. Characteristics of the included studies are listed in Table 1. 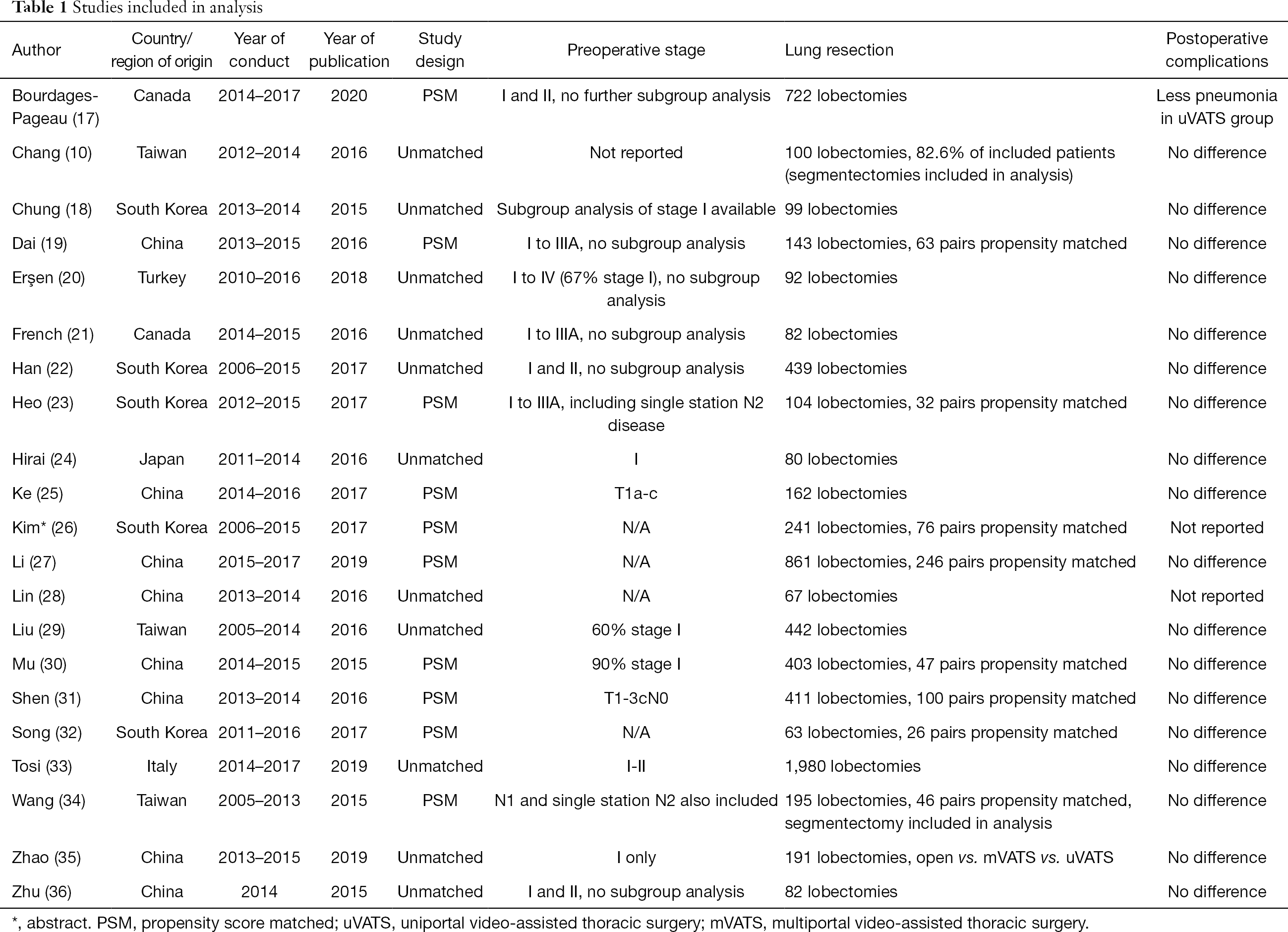 Sixteen studies reported the rate of early postoperative complications. However, there was significant heterogeneity in how complications were defined and classified. Overall, there was no significant difference in complications between the two groups. Bourdages-Pageau et al. reported less pneumonia in the uVATS group than mVATS, but the cause of this observation is unclear. 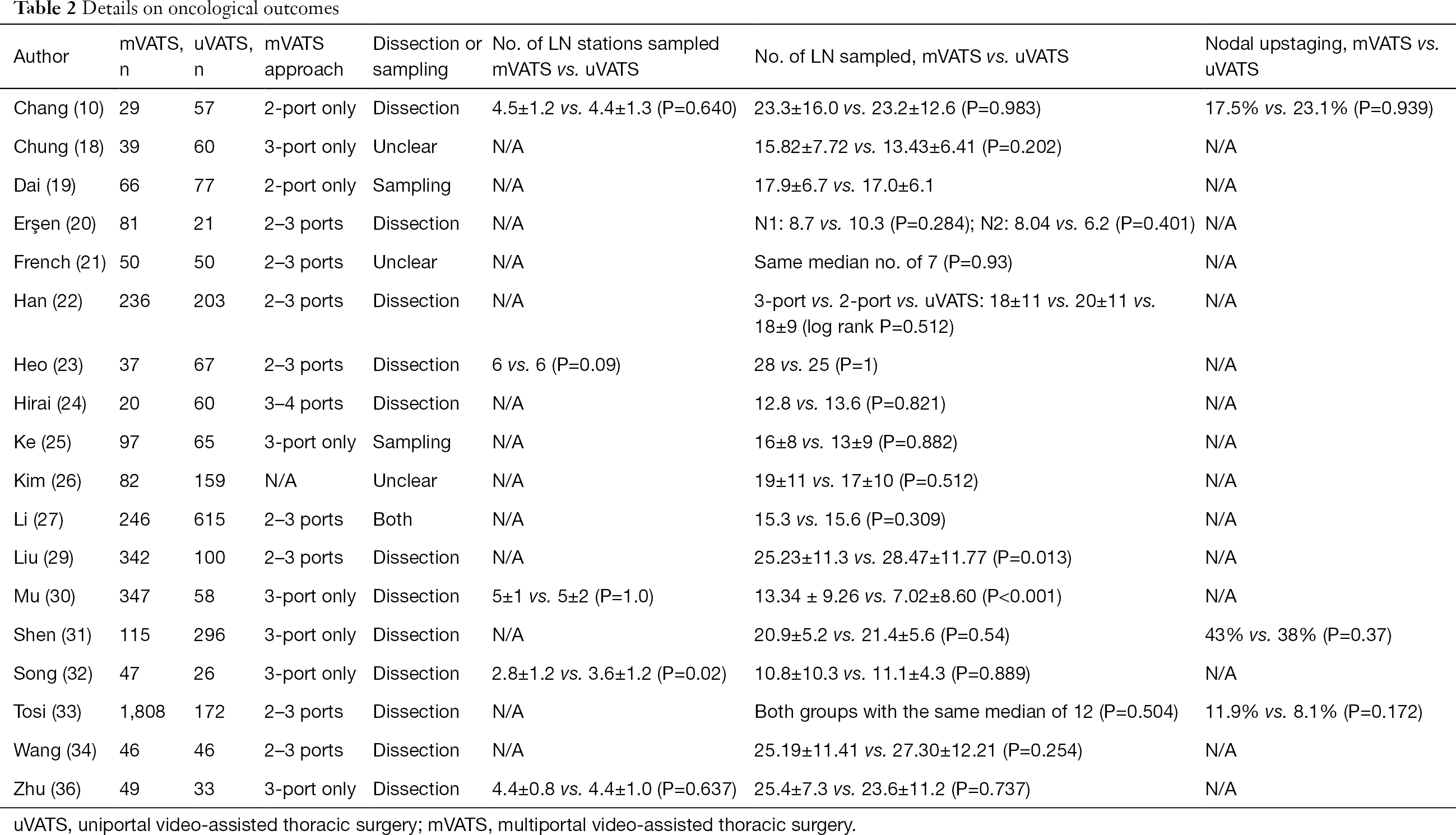 Only two retrospective studies reported data on short- to mid-term survival. Han et al. from South Korea reported the results of 439 VATS lobectomies for stage I and II disease from 2006 to 2015, during the group’s transition from triportal to biportal and then to uniportal. The three-year overall survival was 87.3% for the triportal group (median follow-up of 75.7 months), compared with 93.7% for biportal (median follow-up of 56.5 months), and 93.2% for uniportal (median follow-up 27.5 months). There was no difference in both overall survival and disease-free survival between the three groups (22). Zhao et al. from China retrospectively reviewed results of 191 lobectomies performed on patients with T1a and T1b disease from 2013 to 2015. There was no difference in three-year overall survival between the thoracotomy group, multiportal group and uniportal group (P=0.327) (35). However, the exact percentage of surviving patients at three years in each group was not reported.

In 2014, our institution reported one of the first large-scale case series of uVATS lobectomies involving one-hundred thirty NSCLC patients. Despite the high prevalence of pulmonary tuberculosis in Asia, our experience is that the uVATS approach was not hindered by the presence of anthracotic hilar lymph nodes or dense pleural adhesions, as evidenced by a low conversion rate of 5.3% (2). The two-year overall disease-free survival rate was 96% for stage I disease and 83% for stage II and above, which was in line with these two studies.

Finally, the elephant in the room must be addressed. None of the studies explained the rationale behind the choice of VATS approach. The choice was largely a matter of surgeon’s discretion. One article frankly stated that “the selection criteria between single-port and triple-ports were not special or different” (36). Even with propensity score matching, the risk of selection bias was deemed to be high because only three out of ten studies reported the parameters incorporated in propensity score calculation.

The effect of learning curve

Uniportal VATS is difficult to master. Dedicated and focused training is required at high-volume centres with close mentoring by experienced surgeons. Furthermore, surgeon and institutional experience has been shown to affect oncological clearance. An audit of five-hundred consecutive VATS lobectomies at New York-Presbyterian Hospital showed that significantly more lymph nodes were harvested in the latter half of the cohort. Further analysis of the learning curve of an individual surgeon in VATS lymphadenectomy showed that a plateau in the number of lymph nodes harvested was reached after the initial fifty cases (37). Gonzalez et al. analysed their initial three years of experience with VATS lobectomies at Coruna, during the group’s transition from triportal to biportal. Two-hundred cases from 2007 to 2010 were divided into three cohorts by year and with increased experience, each year saw an improvement in nodal harvesting (38).

Although mVATS is the approach adopted in both studies, the results can be extrapolated to uVATS. Zhongshan University analysed the learning curve of the first one-hundred and twenty uVATS lobectomies performed by a group of experienced mVATS surgeons from 2013 to 2014 (39). The skin-to-skin time reached a plateau after the first thirty cases. Furthermore, there were significantly more conversions and unsuccessful attempts at passing the stapler in the first quartile of the cohort. Our own experience is that trainees should gain experience with biportal instrumentation first before transitioning to uniportal. In the event of technical difficulties, conversion to biportal approach can in most cases ensure safe and expedient conduct of the operation, by allowing more instruments to be introduced into the operating field, reduce instrument fencing and increase stapling angles.

Although there are no limitations intrinsic to the uniportal approach that compromises oncological efficacy, the use of uVATS for lung cancer remains controversial. Retrospective comparative studies suggest that oncological clearance of uVATS is equivalent to mVATS in terms of nodal staging and early mid-term survival, but their results should be interpreted with caution because of selection bias and lack of long-term follow-up. We echo Dr. Gonzalez-Rivas’ call for more high-quality research in this arena, in order to ascertain the true value of uVATS in the armamentarium of modern minimally invasive thoracic surgery (40).

Conflicts of Interest: All authors have completed the ICMJE uniform disclosure form (available at http://dx.doi.org/10.21037/vats.2020.04.02). The series “Oncological Clearance of VATS Lobectomy for Clinical N0 Non-small Cell Lung Cancer” was commissioned by the editorial office without any funding or sponsorship. CSHN serves as an unpaid editorial board member of Video-Assisted Thoracic Surgery from Jun 2019 TO May 2021. CSHN reports personal fees from Johnson and Johnson, USA, personal fees from Medtronic USA, outside the submitted work. The authors have no other conflicts of interest to declare.