Clinical history and surgical management of parapneumonic empyema what is the role of video-assisted thoracoscopic surgery (VATS)?

Pleural empyema, defined as the presence of purulent material within the pleural space, is the consequence of a suppurative process involving the serous pleural layers (1). The first case of empyema was described by Hippocrates about 2,400 years ago (2). Nowadays, the increased incidence of nosocomial infections, acquired immunodeficiencies and antibiotic-resistant germs reflects in a dramatic increase of pleural empyema cases resulting in a challenging management and therapeutic approach. Tantraworasin et al. (3), reporting a current morbidity and mortality rate up to 33%, stated the cornerstone to significantly reduce such occurrence should be to avoid disease progression by an aggressive medical and surgical strategy according to the extent of disease. Antibiotic regimens, firstly empirical and than target ones, should be immediately started as well as chest tube insertion. In the event of progression or failure to medical therapy, surgery should be performed. Concerning with etiology, pleural empyemas can be divided into: (I) primary forms, from pulmonary infectious diseases (pneumonia, abscesses, tuberculosis, descending necrotizing mediastinitis) or extra-thoracic ones (sub-phrenic abscesses, pancreatitis, intestinal perforations, peritonitis with pleura fistula); (II) secondary forms due to iatrogenic causes, such as diagnostic and surgical procedures, traumas (pneumothorax, hemothorax) and tumors (advanced lung cancers, tracheobronchial fistulas, esophageal fistulas, osteonecrosis) (4,5). Involved pathogens significantly vary according to both causes and nosocomial origin. Maskell et al. (6), evaluating the role of fibrinolytic therapy in the treatment of pleural parapneumonic effusions in 460 patients, reported a positive results up to 54% of them on microbiological cultures, with Streptococcus Milleri (29%) as the most common pathogen, followed by Staphylococcus (21%) and Streptococcus pneumoniae (16%). Concerning nosocomial infections, the most frequent pathogen was methicillin-resistant Staphylococcus aureus (27%). With regard to symptoms, Bartlett (7,8) showed complicated parapneumonic pleural effusions secondary to anaerobic microorganisms often presented with an atypical and insidious aspect, as a gradual drop in weight and loss of appetite. In 1962, the American Thoracic Surgery (ATS) (9) defined three different stages according to clinical evolution of pleural effusions: (I) essudative phase (Stage I), characterized by an increase in the permeability of serous layers with exudate production. Despite of fibroblasts and angioblastic cells proliferation with fibrin deposition, no thickenings or pleural remodeling can be identified; (II) fibrinopurulent phase (Stage II), characterized by a massive deposition of fibrin predominantly on the parietal pleura. The purulent exudate exhibits a high concentration of polymorphonucleated lymphocytes. Septa begin to form in a reversible condition; (III) organized Phase (Stage III), with massive fibroblastic proliferation and consensual formation of diffuse septa on both the serous membranes and leading to lung incarceration with an impaired re-expansion. Different classifications have followed over time (10,11), focusing on various parameters such as the amount and the biochemical characteristics of pleural exudates or the presence of thickenings (Tables 1,2). Comparison between the most important classifications was reported in Table 3. Computed tomography (CT) of the chest is the gold standard in the diagnosis and staging of pleural effusions by evaluating the extent and possible causes. However, pleural thickenings can be identified at CT up to 86% of patients and, in 96% of them, a contrast-avidity is reported (12,13). Positron emission tomography (18F-FDG-PET/CT) does not appear to be a diagnostic tool in evaluating patients with pleural effusion due to its low specificity and subsequent difficulty in differentiating between inflammatory and neoplastic disease (14,15). Concerning with surgical approach, the current role of video-assisted thoracoscopic surgery (VATS) is still debated. Reichert et al. (4), in a pleural effusions review, stated that antibiotic therapy, thoracentesis or chest drainage might be considered the gold standard in early-stage empyema while surgery should be referred only to later stages or in presence of a clinical-radiological deterioration. VATS showed effectiveness in the intermediate stage ensuring low postoperative pain, short hospitalization, less postoperative blood loss and fast pulmonary function recovery, with a lower incidence of 30-day morbidity and mortality rate (16,17). The purpose of the study was to clarify the role of the minimally invasive approach in the pleura empyema, through the careful evaluation to the literature. 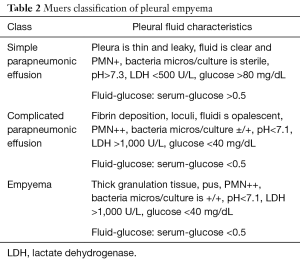 The 2017 pleural effusion management guidelines of American Association for Thoracic Surgery (AATS) (18) suggest management schemes based on the "risk-benefit" relationships and, according to the increase in this ratio, three classes have been identified; Class III is a poorly-rated treatment given the high risk factors compared to benefits (Table 4). The choice of open vs. thoracoscopic strategies must be made by considering a complete evacuation of potentially infected fluid and a complete lung re-expansion. Moreover, with either approach, the main technical considerations include safe access into the chest, drainage of pleural space and maneuvers to allow full expansion of lung. Potential contraindications and drawbacks of VATS include the inability to tolerate single lung ventilation, severe coagulopathy and operative time with increased costs. For these reasons, according to a “risk vs. benefits ratio” guidelines support VATS for all patients with stage II and III (Class of evidence: IIA), provided that thoracotomy should be considered as a viable alternative if a complete toilette is not possible to achieve. Similarly, the 2015 EACTS guidelines (19) favoured for VATS in patients with stage II-III pleural empyema, though this approach was considered controversial especially in patients with stage III empyema with a long (>5 weeks) symptomatic clinical history. In this setting, a minimally invasive approach required a significant learning curve with a high risk of conversion rate, up to 86%. Indications for the conversion were the failure of an adequate pulmonary re-expansion and the inability to maintain selective ventilation. In addition, absolute contraindications for a video-assisted approach were the presence of pleural effusions secondary to tuberculosis and aspergillosis. The mainly strategies of AATS and EACTS guidelines were described in Table 5. Chambers et al. (20), reporting 14 studies about surgical management of stage II and III pleural empyema according to approach (video-assisted vs. thoracotomy), validated VATS as the gold standard both in the early and in the later stage of disease. In particular, VATS decortication is better than open decortication in terms of postoperative pain (P<0.0001) and complications, such as atelectasis (P=0.006), prolonged air-leak (P=0.0003), sepsis (P=0.03) and 30-day mortality (P=0.02). Petrakis (21) supported the importance of minimally invasive surgery by highlighting its role in initial stage disease (Stage I sec ATS) and the crucial importance of an early surgical treatment in order to decrease the intraoperative conversion rate. In fact, in this regard Authors reported conversion rate up to 86% in case of delayed surgical management. Vyhnánek et al. (22), observing 165 patients with pleural empyema undergoing surgery (52 VATS vs. 113 thoracotomy), confirmed VATS toilette as the recommended procedure for treatment of stage II fibrino-purulent disease while VATS decortication as an alternative to classical thoracotomic approach for stage III disease. Sziklavari et al. (23), studying 359 patients with pleural effusion, noted that 308 patients (85.8%) underwent surgical treatment (262 by thoracotomy and 46 by VATS). Authors highlighted that more advanced was the stage less was the use of minimally-invasive approach. Thoracotomy in stage III patients allowed the short hospital stay (P=0.022). Podbielski et al. (24), enrolling 30 patients with pleural empyema (14 thoracotomy vs. 16 VATS), reported no significant differences (P=0.26) between groups in overall hospital stay (10.0±7.2 vs. 17.6±16.8 days, respectively). However, recovery times for drainage tube removal were lower in patients undergoing VATS (4.7±2.8 days) compared with thoracotomy group (8.3±4.6) with statistical significance (P=0.01). Surgical timing (76.2±30.7 minutes) and intraoperative blood loss (131.6±77.3 mm) were lower in minimally-invasive procedure. Authors concluded that in the absence of comorbidity, VATS decortication was the best therapeutic strategy for advanced pleural effusion. Tsai et al. (25) evaluated 33 patients with fibrinopurulent pleural effusion with age over 65 years undergoing VATS decortication. Postoperative 30-day mortality was rate of 3% and 24 patients (75%) achieved a complete pulmonary re-expansion within 3 months after surgery, confirming safety of VATS also in elderly patients. VATS seems to be a safe and an accurate procedure to obtain a satisfactory toilet, as reported by Chen et al. (26) in a study involving 274 patients with empyema secondary to tuberculosis. Authors noted an early recurrence or relapse (elevated temperatures between 38.5 and 39.5 °C and re-effusion with fiberboard) in 3 patients (1.1%) and a late one in 6 patients (2.3%) (re-effusion and surgical site infection after six months of intervention). In this setting, Kim et al. (27) argued that VATS debridement and decortication is a relatively simple and effective method in the management of fibrinopurulent and organized pleurisy. Similarly, Homvises (28), studying retrospectively 23 adult patients with stage II and stage III empyema undergoing VATS decortication, reported a median hospital stay of 12.6 days and an average chest tube maintenance of 5 days. No intraoperative mortality were reported, with an overall mortality rate of 8.69%. Hajjar et al. (29), analysing 63 advanced pleural empyema patients who underwent VATS decortication and comparing them with early stage disease ones, reported a conversion rate of 32.4% (12 patients). However, chest tube removal was more rapid in VATS patients when compared to thoracotomy ones (7.84±3.33 vs. 15.92±8.2). Jagelavicius et al. (30), evaluating 71 stage II-III patients in order to identify predictive conversion factors and to recognize the time interval between the onset of the disease and surgical treatment as a risk model, showed that a cut-off of 16 days increased conversion rate with a sensitivity and specificity of 94.4% and 54.7%, respectively. To this date, only patients with unilateral pleural effusion have described. In fact, a bilateral manifestation can rarely happen (31) and resulting in an extremely complex scenario. Nose et al. (32) described the case of a 38-year-old patient with bilateral pleural empyema successfully treated by bilateral VATS decortication. 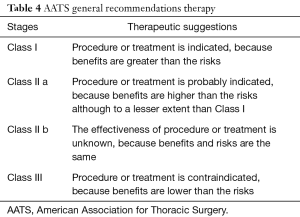 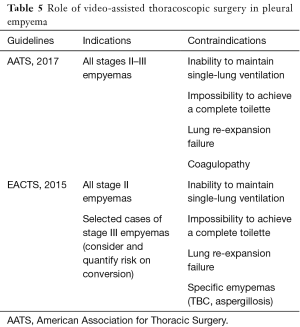 According to current guidelines and reports of literature, strategies for treatment of pleural empyema are undoubtedly related to the stage of disease. If a conservative approach should be preferred to stage I disease by intercostal drainage tube placement, for stage II-III VATS decortication should be proposed. VATS significantly decreased both morbidity and mortality rates. The limit of minimally-invasive procedure is the advanced stage III that requires the thoracotomy approach as elective indication (Figure 1). 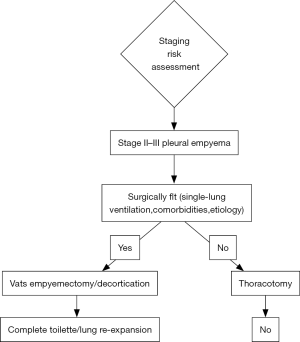 Provenance and Peer Review: This article was commissioned by the Guest Editors (Marco Scarci and Ilaria Righi) for the series “Minimally Invasive Management of Infectious Pleuropulmonary Diseases” published in Video-Assisted Thoracic Surgery. The article has undergone external peer review.

Conflicts of Interest: All authors have completed the ICMJE uniform disclosure form (available at http://dx.doi.org/10.21037/vats.2017.08.08). The series “Minimally Invasive Management of Infectious Pleuropulmonary Diseases” was commissioned by the editorial office without any funding or sponsorship. The authors have no other conflicts of interest to declare.