Video-assisted thoracoscopic surgery (VATS) lobectomy with systematic mediastinal lymph node evaluation has been adopted worldwide for lung cancer surgery due to improved early outcomes—lesser pain, a shorter hospital stay, fewer complications, and a higher compliance to adjuvant chemotherapy compared to thoracotomy—without compromising oncologic outcomes (1-6). Meanwhile, accurate mediastinal lymph nodes evaluation plays a pivotal role by providing precise staging and a therapeutic purpose of loco-regional control, which contribute to improved long-term survival after surgery. Current guideline recommends that N1 and N2 node resection should be a routine component of lung cancer resections—a minimum of three N1 and three N2 stations should be sampled or completely dissected based on the International Association for the Study of Lung Cancer nodal map (7,8). There have been some studies suggesting the removal of a minimum of 10 lymph nodes, however, this number ranges up to 16 lymph nodes depending on the study (9-11). Despite of the guideline which suggests to evaluate and remove lymph nodes, the adherence to the guideline is quite poor (12,13).

From April of 2005 to June of 2013, a total of 2,502 patients underwent curative surgical resection of NSCLC at Seoul National University Hospital. Among them, multi-portal VATS lobectomy was performed in 1,055 patients (42.2%). We identified 974 eligible patients during the study period following the inclusion criteria: (I) who underwent VATS lobectomy for lung cancer with clinical N0 disease, (II) pathologically confirmed as NSCLC. We excluded 81patients based on the following criteria: (I) small cell histology, (II) wedge resection, segmentectomy and pneumonectomy, (III) intentional thoracotomy, and (IV) who were treated with neoadjuvant chemo or radiotherapy. VATS has been adopted for lung cancer since April 2005 in our institute. Currently, we predominantly perform VATS in over 80% of all lung cancer surgeries. All surgical candidates for lung cancer were evaluated with a chest CT scan and whole body FDG PET. In our institution, at least three N2 stations (2R, 4R, 7, 9 for right side and 4L, 5, 6, 7, 9 for left side), hilar, interlobar and peribronchial lymph nodes were completely dissected during the surgical resection except for anthracofibrosis of lymph nodes were technically impossible to be resected completely and mediastinal lymph node dissection was intentionally avoided. In addition, we preferred an en-bloc resection of N1 lymph nodes during lobectomy to avoid fragmentation. Complete mediastinal lymph node dissection was defined when at least three N2 stations were examined. This study was approved and an informed consent was waived by the Institutional Review Board in our institute.

Long-term prognosis and the number of resected lymph nodes

Figure 1 Overall survival (A) and recurrence-free survival (B) according to pathologic TNM stages.

Figure 2 Overall survival (A) and recurrence-free survival (B) according to pathologic N status. 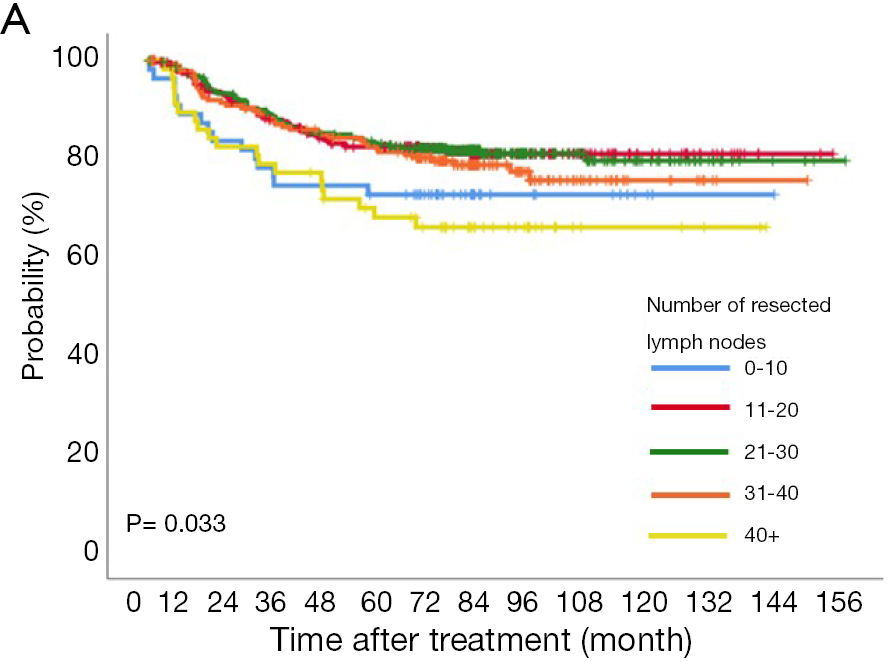 Figure 3 Recurrence-free survival according to the number of resected lymph nodes. 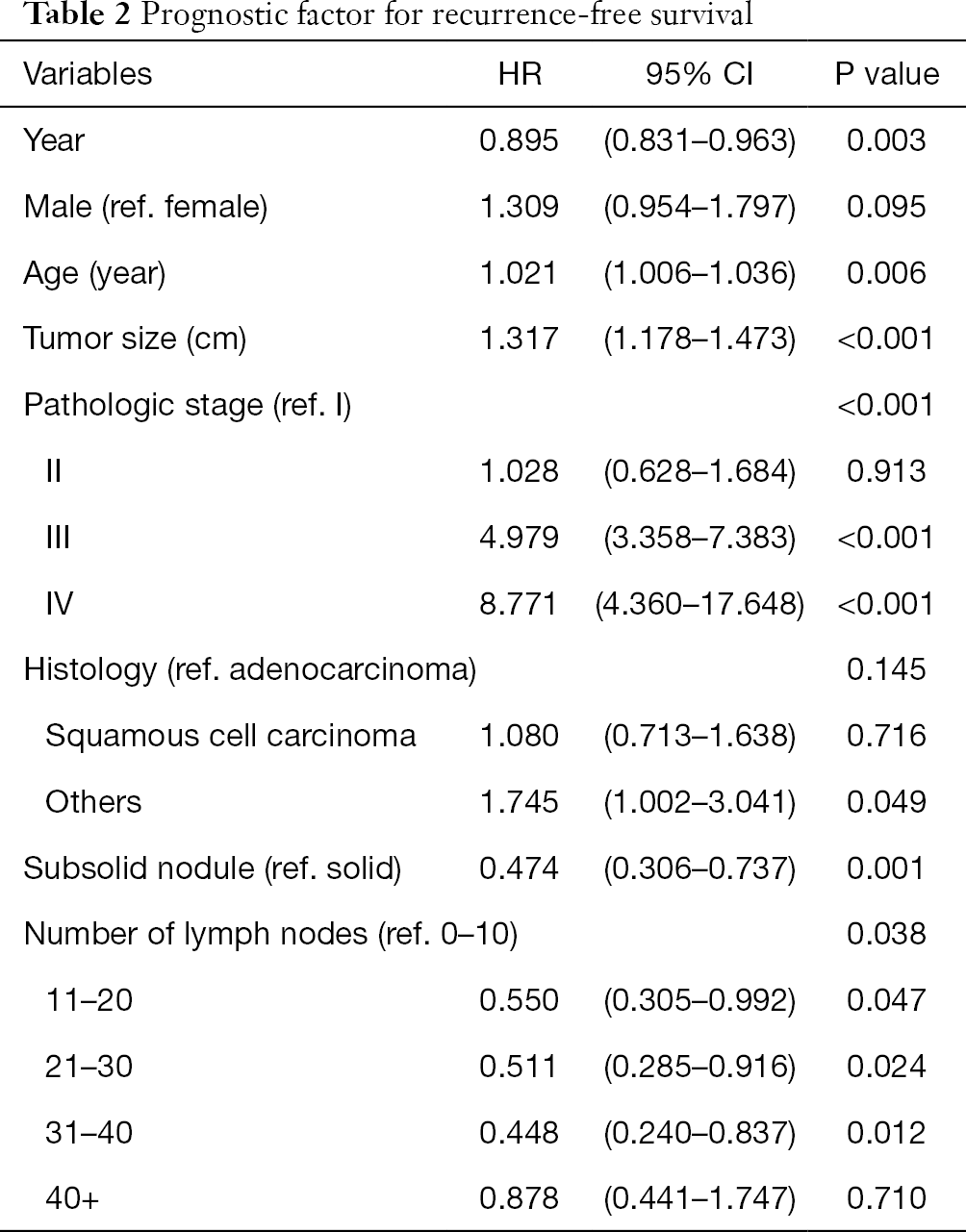 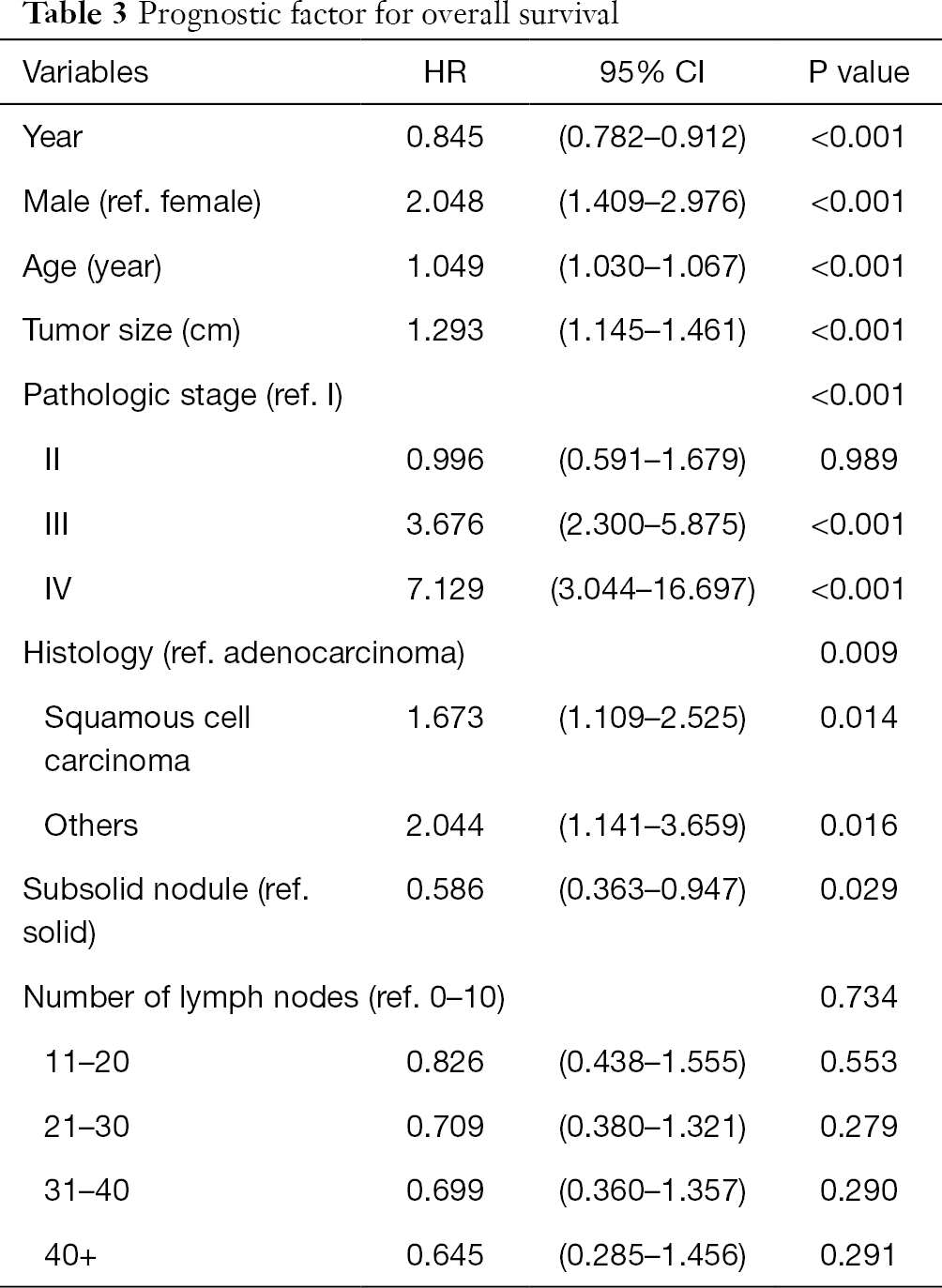 We demonstrated long-term oncological outcomes of VATS lobectomy and mediastinal lymph node dissection for clinical N0 NSCLC based on a single institution’s initial experience. Therefore, we were able to provide long-term survival rates and detailed recurrence patterns in depth with the sufficient follow up duration. In our institution, over 90% of the patient underwent complete mediastinal lymph node dissection and satisfactory overall and recurrence-free survival were achieved. The present study revealed a significant association between the number of resected lymph nodes and long-term survival. Furthermore, harvesting lymph nodes ranging 11 to 40 was associated with improved recurrence-free survival. There was no incremental improvement in the prognostic value after 40+ lymph nodes resection.

Systematic lymph node dissection allows accurate staging and subsequent improved survival. The AJCC TNM staging system for lung cancer uses the nodal stations based on IASLC nodal map, rather than the number of lymph nodes unlike gastrointestinal, breast, and bladder cancers (18). Therefore, there is no definite guideline for the number of examined lymph nodes during operation. The current guideline recommends at least six nodal stations to be examined three from N1 and three from N2 stations (7,8,19). Several studies suggest that at least 10 to 16 lymph nodes should be removed to improve long-term outcomes (9-11,20). Meanwhile, nodal upstaging is a frequently used surrogate for the completeness of node evaluation in the field of cancer surgeries. A recent large scale cohort study based on the National Cancer Database reported that incidence of unsuspected pN1 and pN2 in cN0 disease after lobectomy were 6.7% (8,915/132,604) and 3.9% (5,192/132,604), respectively (21). Our study showed similar nodal upstaging rates with previous literature, irrespective of surgical approach (14,15,21,22). Association between nodal upstaging and the survival advantage has been contradictory so far. Interestingly, although our data showed a good separation according to pathologic stages, the unsuspected pathologic N1 group showed a comparable long-term survival rate with those of pathologic N0 group. These results may imply that complete dissection of metastatic hilar and peribronchial lymph nodes may have been performed during surgical resection and may also have led to a therapeutic effect.

The quality of lymph node dissection is different according to the facility and surgical approach (9,13-15). The reason for a low incidence of nodal upstaging of VATS is associated with the preferential use of VATS or thoracotomy. In addition, peripheral tumors tend to have lower nodal metastasis than central tumors. This may have influenced the selection for VATS for its surgical approach which may have results showing a discrepancy (23,24). Some surgeons argue that a fissureless technique to avoid air leakage may be related to low number of lymph nodes retrieved (25). The impact of the advanced surgical approach on the efficacy of lymph node assessment is not clear. The development of instrumentation such as robotic and 3D videoscope may allow delicate dissection and substantial high yield of lymph node (22,25). Wilson et al. reported that robotic lobectomy achieved similar nodal upstaging with that of thoracotomy, which was significantly higher than that of VATS (22). On the contrary, a large retrospective study showed no association between robotic and VATS for nodal upstaging and long-term survival (17). However, the overall number of harvested lymph nodes, around 10, from each surgical approach is quite low compared to our data. Moreover, the difference according to surgical approach disappeared in the academic/research facility (14,15). Therefore, we should interpret with caution due to the heterogeneity of studies regarding lymph node dissection.

A precise counting of resected lymph nodes is obscured by fragmentation during the operation, especially in VATS. Different institutions, surgeons, and pathologists affect the assessment of the number and completeness of lymph nodes examined. Although four surgeons performed VATS lobectomy for lung cancer during the study period, institutional policy with regards to preoperative evaluation for lung cancer and preferential use of mediastinal lymph node dissection rather than sampling were not quite different among the surgeons. Upstaging following surgical resection depends on the accuracy of clinical staging as well. During the study period, preoperative evaluation modality and technology had evolved, particularly, the routine use of PET-CT and EBUS-TBNA (26,27). Therefore, we included the year of surgery as a covariate to adjust those temporal changes.

Conflicts of Interest: All authors have completed the ICMJE uniform disclosure form (available at http://dx.doi.org/10.21037/vats.2020.02.03). The series “Oncological Clearance of VATS Lobectomy for Clinical N0 Non-small Cell Lung Cancer” was commissioned by the editorial office without any funding or sponsorship. The authors have no other conflicts of interest to declare.

Ethical Statement: The authors are accountable for all aspects of the work in ensuring that questions related to the accuracy or integrity of any part of the work are appropriately investigated and resolved. The study was approved by Seoul National University Hospital Clinical Research Institute with informed consent not required (IRB No. 1911-139-1080).