In recent years, the development of imaging modalities and the widespread use of low-dose helical computed tomography (CT) have contributed to an increase in the detection of early stage lung cancer (1,2). At present, the standard treatment for early stage lung cancer is surgical resection. Recently, video-assisted thoracoscopic surgery (VATS) has become widely used as a less invasive procedure. In fact in the US, of 55,972 patients who underwent lobectomy for non-small-cell lung carcinoma (NSCLC) performed at 905 commission on cancer accredited hospitals over a 3-year study period between 2010 and 2012, 17,072 (30.5%) patients underwent a VATS approach (3). Moreover, the European Society of Thoracic Surgeons database showed that the number of VATS procedures for lung cancer dramatically increased to 18.8% between 2010 and 2012 (4). The Japanese Association for Thoracic Surgery Annual Report for 2016 indicated that VATS for lung cancer was performed in 64.3% of patients (26,188) in 2015, whereas the operation for lung cancer involving all procedures in general thoracic surgery was performed in 50.5% of patients (5). Minimally invasive surgeries, such as VATS lobectomy or segmentectomy, require precise anatomical knowledge of the pulmonary vessels and bronchi for each patient. Thus, preoperative information of the surgical anatomy is anticipated to substantially contribute to the safety of each operation.

The technology of three-dimensional (3D) reconstruction generated from multi-detector computed tomography (MDCT) imaging enables surgeons to recognize the anatomic structures of each patient preoperatively. Furthermore, 3D imaging reflects the actual lung structures or tumors more accurately than two-dimensional (2D) imaging that is used by conventional CT imaging. In this review, we discuss the pragmatic features of the 3D imaging technology for thoracoscopic lung cancer surgery, focusing on complicated surgeries or preoperative evaluation. We also present our perspectives on the 3D imaging technology and surgical resection for lung cancers.

In 2003, Watanabe et al. used 3D-CT pulmonary angiography to evaluate the branch patterns of pulmonary arteries (PAs) before anatomic pulmonary resection (6). Of 14 patients with primary lung cancer who underwent anatomic pulmonary resection, 98% (84 of 86) of the PA branches were successfully identified on preoperative 3D-CT images. Fukuhara et al. reported 49 lung cancer patients who were examined by preoperative 3D-CT angiography before complete VATS lobectomy (7). The intraoperative findings showed that 95.2% (139 of 146) of the PA branches were precisely detected on the 3D-CT images. Some of the undetected PA branches in the studies of Watanabe et al. and Fukuhara et al. were reported to be less than 1.5 mm and 2 mm in diameter, respectively.

We previously described the usefulness of 3D-CT lung modeling using a high-speed 3D image analysis system (Synapse Vincent, Fuji Film Co., Ltd., Tokyo, Japan) and reported the ability of recent 3D imaging software to generate the segmented lung parenchyma as well as the bronchial trees and pulmonary vessels (11). The system generates 3D images using digital imaging and communication in medicine (DICOM) data in conventional enhanced CT scanning. This avoids exposure of patients to excessive radiation or to a leaked iodinated contrast medium in their arms. The processing time for visualizing the pulmonary vessels, tracheobronchial trees, and lung parenchyma is approximately 5 minutes. After reconstructing the 3D images, the system allows investigators to simulate each operation, evaluate the targeted tumors, or measure the surgical margins from the tumors.

Fukuta et al. described 2 lung cancer patients who had anomalous veins as detected by preoperative 3D imaging and who received VATS lobectomies (14). Sumitomo et al. reported a lung cancer patient who had transposition of the right pulmonary artery and the V1 through V3 segments of the pulmonary vein (15). The anomalous vessels were detected by preoperative 3D imaging analysis, and VATS right upper lobectomy was performed.

Three-dimensional imaging analysis has also been reported to be useful for robot-assisted thoracic surgery. Specifically, Kajiwara et al. demonstrated the use of preoperative 3D imaging analysis not only for intraoperative navigation, including the detection of tumors or surrounding tissues, but also for knowing the best positioning of the robotic arms and instruments preoperatively (16). 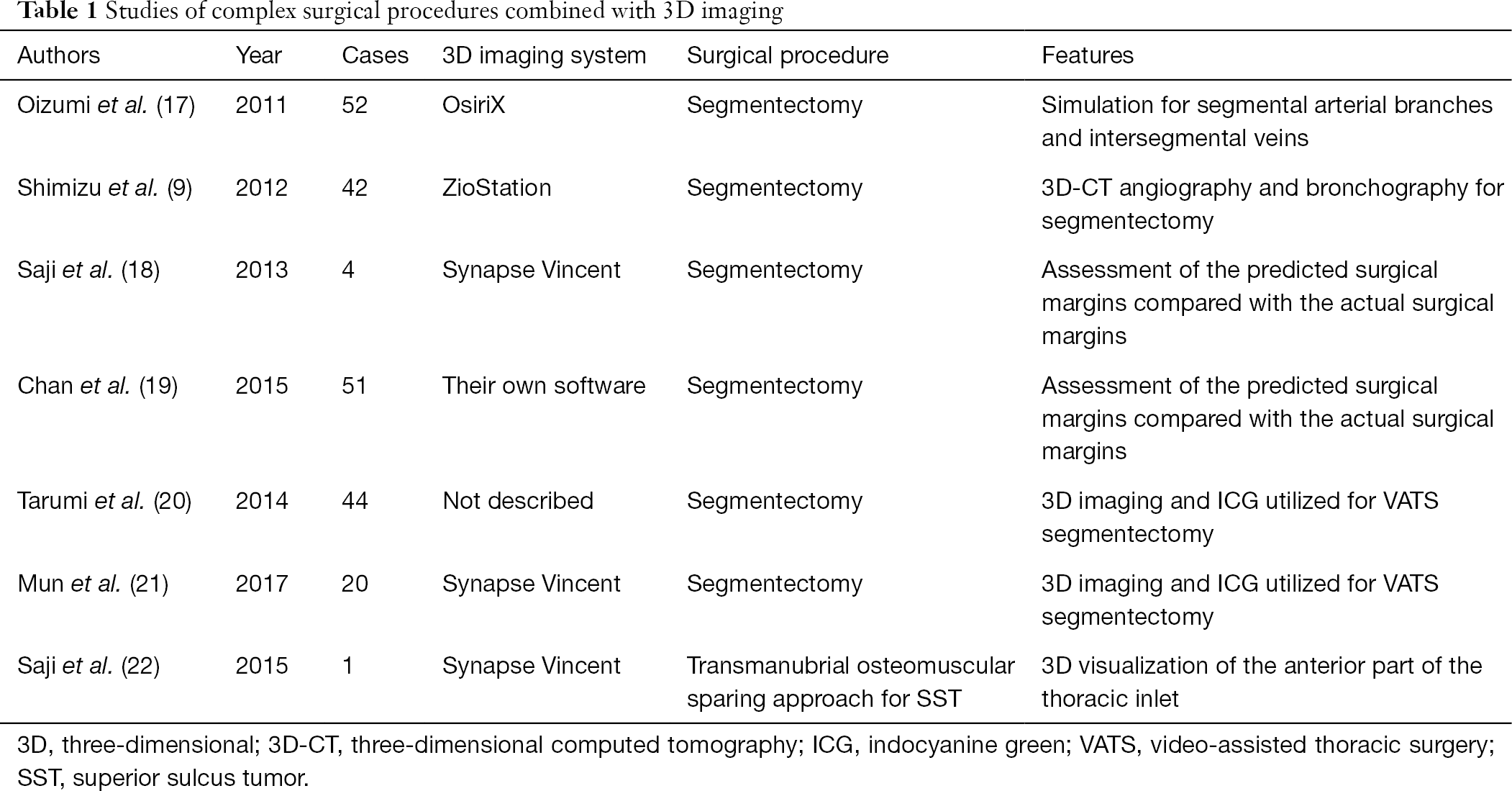 The benefits of 3D-CT angiography and bronchography for 27 hybrid VATS segmentectomies and 15 complete VATS segmentectomies have also been demonstrated by Shimizu et al. (9). They utilized a workstation with volume-rendering reconstruction software (Ziostation, Tokyo, Japan) to generate 3D-CT angiography images. Additionally, 3D reconstruction of the bronchial tree was performed by mathematical morphology-based 2D segmentation, and further restoration was achieved by the manual addition of segments from the 2D axial images to the 3D image. The distance between the intersegmental veins and the tumor was measured using the 3D-CT image. Shimizu et al. applied 3D-CT angiography and bronchography for segmentectomy to understand the positional relationship between the segmental veins and the bronchi as well as the anatomical variations of the pulmonary veins and bronchi. They described the difficulty of identifying the intrasegmental and intersegmental veins for segmentectomy using only 3D-CT angiography, because the branches of the pulmonary veins were associated with the bronchi in various patterns.

Three-dimensional reconstructed imaging and indocyanine green (ICG) have also been used for VATS segmentectomy by Tarumi et al. (20) and Mun et al. (20,21). During the preoperative evaluation, dominant pulmonary arteries for a targeted segmental lung were identiﬁed. After the dominant pulmonary arteries and segmental bronchus were divided in the operation, ICG was injected into a peripheral vein. Under infrared light, the appearance of the lung in the areas with blood ﬂow gradually changed, whereas the appearance of the lung in the areas without blood supply remained pale. This method allowed surgeons to recognize the segmental ﬁssures easily for anatomical segmentectomy even with a limited surgical view such as in VATS. Moreover, Tarumi et al. identified the intersegmental lines in 84% of their patients (20). Mun et al. demarcated a border between the targeted segments and preserved lung clarity, and marked the resected line on the lung surface in 95% of their patients (21). Moreover, Mun et al. evaluated the time it took for the demarcation lines to appear after ICG injection and the time the lines lasted, namely, 20 s (10–100 s) and 180 s (90–300 s), respectively.

Preoperative 3D-CT imaging analysis has also been applied to a patient with superior sulcus tumor which invaded the anterior part of the thoracic inlet including the clavicle, sternoclavicular joint, first rib, subclavian vessels, and brachial plexus (22). The patient underwent a transmanubrial osteomuscular-sparing approach and an additional third anterolateral thoracotomy with a hemi-clamshell incision to achieve complete tumor resection.

Several studies on the prediction of postoperative pulmonary function by 3D-CT imaging have been conducted (Table 2).

The studies on the prognostic factors of lung cancer as determined by 3D imaging are summarized in Table 3. 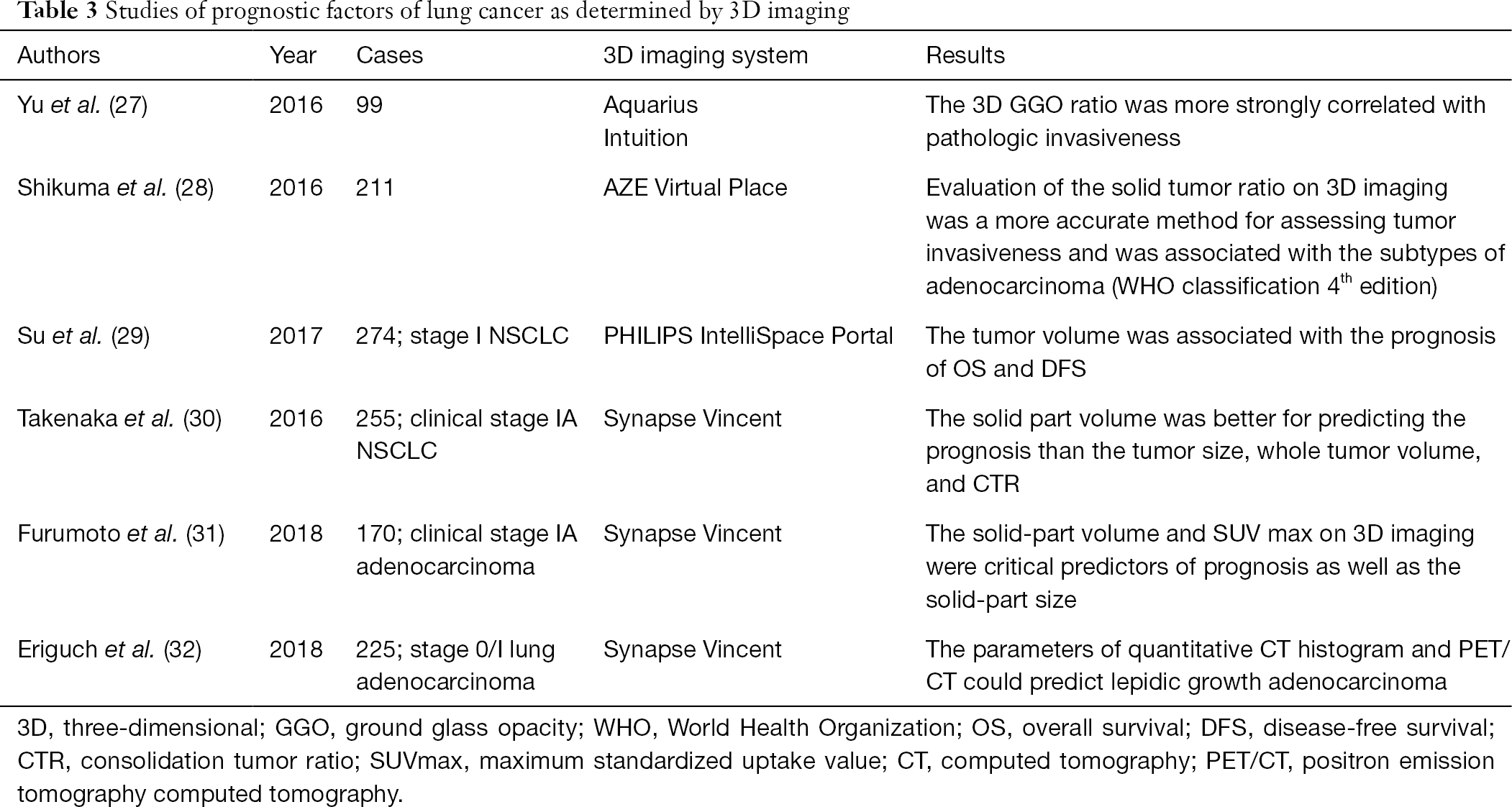 Three-dimensional tumor size has also been reported as a prognostic factor in patients with surgically resected lung cancer. In particular, Su et al. evaluated the prognostic impact of tumor volume on 274 patients who underwent surgical resection for stage I NSCLC (29). They performed 3D-CT analysis to calculate tumor volume and the greatest tumor diameter. The cut-off values of the tumor volume for disease-free survival (DFS) and overall survival (OS) were determined using their ROC curves. Based on the cut-off values, a larger tumor volume was found to be a significant poor prognostic factor for OS and DFS. Notably, similar results were observed in the tumors whose greatest tumor diameter was less than 3 cm.

The combination of 3D-CT imaging with WHO (PET/CT) for lung cancer surgery has also been recently reported. Furumoto et al. in particular showed that the maximum standardized uptake values (SUVmax), solid part size on high-resolution CT (HRCT), and solid part volume on 3D imaging were critical predictors of prognosis and pathological invasiveness in patients with clinical stage IA adenocarcinoma (31). Their 170 patients underwent PET/CT, HRCT, and 3D reconstruction imaging before the complete resection of lung cancer. The ROC curve allowed them to determine the cut-off values of each parameter, and the prognosis of the patients stratified by those values obviously reflected better or worse. The solid part volume was an independent predictor of DFS on multivariate analysis, whereas the volumetric quantification of the solid part and SUVmax were the most powerful predictors.

The development of 3D imaging technologies has led to the preoperative evaluation of lung functions or tumors, as well as to obtaining more precise information of anatomical structures for lung cancer surgery. The unique visualization of anatomical structures generated by 3D imaging software has enabled surgeons to perform safer and more accurate operations despite performing minimally invasive surgery with a limited field of vision. Moreover, 3D imaging requires no additional examination for patients, and the process of reconstructing 3D images is simple and takes only a few minutes. Additionally, the visualization technology can predict the risk of postoperative complications while it analyzes factors associated with lung functions. Moreover, 3D imaging can predict histopathological features (e.g., lepidic growth pattern) or prognostic factors with/without the combination of PET/CT examination.

Importantly, the preoperative data and feedback from the 3D imaging may be used for developing different types of real-time navigation software, such as a global positioning system. This will enable surgeons or robots to more accurately recognize anatomical structures and perform operation easier. On the other hand, considerable efforts must be exerted to identify parameters for the prediction of histopathological features, tumor invasiveness, or prognostic factors by 3D imaging.

In the future, we anticipate that the 3D imaging technology will enable the prediction of the molecular features of lung cancer in combination with other examination devices without the need for pathological examination.