There has been increasing evidence that video-assisted thoracoscopic surgery (VATS) lobectomy for patients with non-small cell lung cancer (NSCLC) is the preferred approach compared to thoracotomy due to fewer complications and faster recovery (1-3). Initially, VATS was limited to early stage NSCLC because of concern about oncologic equivalence. However, over time, it has been shown that VATS lobectomy is safe for early stage disease with sound oncologic outcomes. VATS is now being applied to patients with bigger tumors, patients with nodal positive disease, and those who have received induction therapy (4-8). In this article, four aspects of VATS lobectomy for patients with node positive tumors will be reviewed. These include nodal clearance and rates of pathological upstaging, the learning curve associated with VATS lobectomy, the use of robotics, and the role of VATS in patients who have received neoadjuvant treatment.

Adequate lymph node clearance is an essential part of the surgical management of NSCLC. It helps in assessment of prognosis and determines therapeutic options. Two important measures when comparing VATS versus thoracotomy are the number of lymph nodes harvested and the rate of nodal upstaging. Pathologic nodal upstaging can be used as a proxy for completeness of nodal evaluation. Early studies examining the approaches have shown that thoracotomy retrieved more lymph nodes and had a higher rate of nodal upstaging as compared to VATS (Table 1). Lee and colleagues reported that compared to VATS, thoracotomy yielded more nodes (14.3 vs. 11.3) and removed more nodal stations (3.8 vs. 3.1) (9). Interestingly, they did not find a difference in 3- and 5-year overall survival (OS) or disease-free survival (DFS) between the groups, (87.4% and 76.5% for VATS OS, and 81.6% and 77.5% for thoracotomy OS, respectively). More than 90% of their patients were clinical stage I (Table 2). Denlinger and colleagues analyzed lymph node evaluation in VATS lobectomy compared to thoracotomy in over 500 patients at their institution and found that VATS sampled significantly fewer lymph nodes, 7.4 vs. 8.9, as well as significantly fewer N2 nodes, 2.5 vs. 3.7 (10). In their short follow-up period, the 3-year survival showed no difference (74.5% open vs. 83.3% VATS). Flores and colleagues also reported that VATS removed significantly fewer nodal stations, 3.6 vs. 4.5, when compared to thoracotomy (2). The 5-year survival of the VATS group was 79% which was similar to the thoracotomy group at 75%. 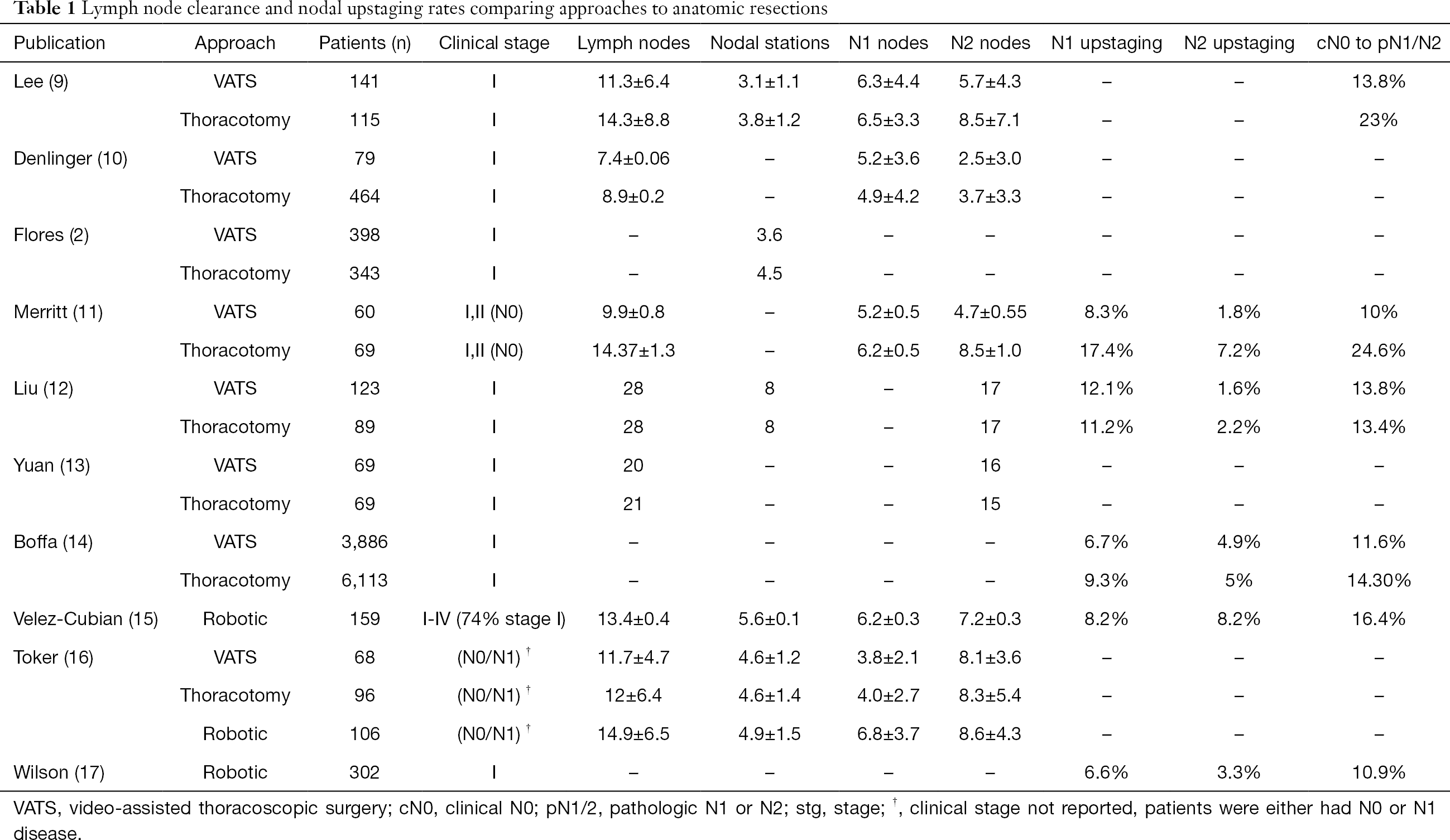 Boffa and colleagues queried The Society of Thoracic Surgeons-General Thoracic Database and found 11,500 patients who underwent anatomic resection for clinical stage I NSCLC (14). They reported that the VATS lobectomy group had a lower rate of N1 upstaging compared with the thoracotomy group (6.7% vs. 9.3%, respectively), suggesting that VATS may compromise hilar and peribronchial nodal clearance. Of note, the N1 upstaging rates were similar when comparing thoracotomy patients to patients undergoing minimally-invasive lobectomy by experienced VATS surgeons. Merritt and colleagues reviewed their institutional data comparing thoracotomy to VATS for N0 NSCLC and found that in their thoracotomy group, significantly more lymph nodes were dissected, 14.6 vs. 9.9 nodes (11). They also found a higher rate of nodal upstaging to N1/N2, 24.6% vs. 10%. The 3-year survival between both groups showed no difference (89.9% VATS vs. 84.7% open). In the end, while the data in these studies show that VATS may harvest fewer lymph nodes and sample fewer nodal stations, it does not necessarily translate into worse survival.

An important factor in nodal clearance rates and nodal stations removed has been the learning curve associated with adoption of VATS lobectomy. It has been reported that the initial learning curve for VATS lobectomy is anywhere between 50 to 100 cases (18-20). Once an individual surgeon surpasses this level, it has been demonstrated that there is an increase in the number of lymph nodes harvested and the number of lymph node stations removed. Lee and colleagues reviewed their institutional data and found that across 500 consecutive patients, the total number of lymph nodes removed, 11 vs. 12, and lymph node stations removed, 3 vs. 4, increased as they gained cumulative experience (21). They also recognized that, with experience, they performed VATS on older patients, often with more compromised pulmonary function and more advanced stage disease. Despite this, the propensity-matched early and late groups found no difference in DFS at 3 years, 82% in the early group vs. 85% in the late group. Gonzalez-Rivas and colleagues similarly analyzed their initial 3 years of VATS lobectomies in 200 patients (22). They reported a significant improvement in number of nodes harvested, 11.9 nodes during the first year compared to 13.9 in the third year. They also found that more nodal stations were explored, 3.6 stations during the first year compared to 4.5 stations during the third year, with increased experience. Chen and colleagues recently reported a propensity-matched comparison of VATS to thoracotomy lobectomy for patients with clinical stage II and IIIa NSCLC with 120 patients in each arm (23). Evaluating the thoroughness of lymph node clearance, they found that compared to their early group, a greater number of nodes (16.5 vs. 12.2), total nodal stations (5.8 vs. 5.2), N1 stations (2.4 vs. 1.8), N1 nodes (5.7 vs. 4.3) and N2 nodes (10.8 vs. 8.0) were retrieved by VATS than thoracotomy in their late group. With greater cumulative experience and the continued maturation of VATS techniques by thoracic surgeons, VATS can be safely applied to the majority of cases without compromising nodal clearance rates.

Over the last decade, the robotics platform has been increasingly applied to thoracic surgery. Some of the benefits over traditional VATS include three-dimensional visualization, fully articulating instrumentation, 10× magnification, computer-assisted scaled motion, and reduction of hand-related tremors (24). These advantages potentially facilitate a more complete nodal harvest due to the more precise dissection of the mediastinal and hilar lymph nodes. This aspect of robotic-assisted VATS (RVATS) lobectomy is worth highlighting since a more complete nodal dissection ultimately allows for an increased ability to identify occult metastatic disease in the locoregional lymph nodes. In patients with clinically positive nodal disease, lymph node clearance becomes even more important to remove all existing and potential disease. Velez-Cubian and colleagues reviewed 159 robotic-assisted lobectomies for NSCLC, examining their efficacy of lymph node dissection (15). They reported their mean total of lymph node stations assessed was 5.6 stations while their mean total lymph nodes dissected were 13.4 lymph nodes. Ninety-eight point one percent of their patients had ≥3 N2 lymph node stations assessed, which the current National Comprehensive Cancer Network guidelines suggest is the minimum N2 stations needed for accurate staging (25). Their rate of nodal upstaging was 19%. They concluded that lymph node dissection during RVATS lobectomy was effective and comparable, if not at times better, than historical data published for traditional VATS and thoracotomy approaches. Toker and colleagues compared their data for open versus VATS versus robotic-assisted approaches in the dissection of N1 and N2 lymph nodes during lung resection (16). They found the robotic approach dissected more lymph nodes compared to VATS and open (14.9 vs. 11.7 vs. 12, respectively), with the increase being in the N1 nodes at levels 11 and 12. The number of N1 and N2 lymph node stations assessed were similar between the approaches (4.6 for VATS, 4.6 for open, 4.9 for RVATS). Wilson and colleagues looked at the prevalence of nodal upstaging during robotic anatomic lung resections for stage I NSCLC in 302 patients (17). They were able to demonstrate a 6.6% rate of N1 upstaging and a 3.3% rate of N2 upstaging for a total of 10.9% rate of nodal upstaging. This was comparable to published literature for VATS but was less than rate of upstaging with thoracotomy. As the robotic technology continues to develop and RVATS lobectomy techniques continue to be refined, it can likely be applied to patients with nodal positive NSCLC given the potentially superior nodal clearance rate.

Role of VATS after induction therapy

Induction therapy plays an important role in patients with locally advanced NSCLC with nodal positive disease. Patients who are found to have mediastinal nodal involvement during pre-resection staging are typically given induction chemotherapy with or without radiation. In some cases, induction therapy is given to patients with bulky hilar nodal disease. There is concern that induction therapy causes an inflammatory response to the lung and hilar structures, leading to adhesions and difficulty clearing the mediastinal lymph nodes. While this was previously considered to be a relative contraindication to a VATS approach, VATS has been demonstrated to be safe and effective for patients receiving neoadjuvant treatment for NSCLC (4,26,27). Patients who receive induction therapy and proceed to VATS have a higher rate of conversion to open which may increase the length of stay but typically does not increase the rate of postoperative complications. Huang and colleagues evaluated 43 patients with stage IIA-IIIB NSCLC who underwent induction therapy (chemotherapy, targeted therapy and radiotherapy, either alone or in combination) followed by VATS resection including 28 lobectomies (4). They reported a 16.7% conversion rate, a 9.5% complication rate with 1 and 3-year survival rates of 94% and 65%, respectively (Table 3). They harvested a mean of 16.88 lymph nodes. They concluded that VATS following neoadjuvant therapy is safe and feasible for the treatment of locally advanced NSCLC and that the long-term efficacy was satisfactory. Kamel and colleagues reviewed their experience with patients that underwent lobectomy after induction therapy, comparing VATS to thoracotomy (28). A 1:2 propensity match was performed with 40 VATS patients and 74 thoracotomy patients. Induction therapy given was either conventional chemotherapy, one of three targeted therapies in a clinical trial, or conventional chemotherapy combined with a COX-2 inhibitor. No differences were found in the number of lymph nodes resected (12 vs. 15, P=0.94), the number of stations (4 for each group), or in the rate of R0 resections (95% vs. 96%) comparing VATS to thoracotomy groups. The rate of open conversion was 12.5%, which was secondary to dense adhesions. 5-year DFS showed no difference between the VATS and thoracotomy groups (73% vs. 48%, P=0.09). They also found that the VATS approach was associated with less estimated blood loss, shorter length of stay and a trend towards fewer postoperative complications.

Gonzalez-Rivas and colleagues looked at 43 patients who underwent uniportal VATS resections for locally advanced NSCLC, including 37 lobectomies, of whom approximately two thirds had neoadjuvant treatment (chemotherapy vs. chemoradiotherapy) (7). Their reported a conversion rate was 6.5%, a complication rate of 14% and a 30-month survival rate of 74%. They harvested, on average, 16.5 lymph nodes and assessed 4.97 nodal stations. They concluded that uniportal VATS in locally advanced NSCLC, including those who received neoadjuvant treatment was safe and reliable. Yang and colleagues reviewed 272 patients looking at long-term survival following open vs. VATS lobectomy after neoadjuvant chemotherapy ± radiation for NSCLC (27). They found that VATS trended toward improved survival on multivariate analysis but did not reach statistical significance. Their open conversion rate was 10%, five patients due to adhesions while two were due to bleeding. On their propensity-matched analysis, they reported that the VATS approach compared to thoracotomy had a similar 3-year OS (54% vs. 49%) and DFS (34% vs. 24%). They concluded that overall, VATS was safe for patients who received induction therapy without compromising oncologic outcomes.

VATS lobectomy has been increasingly shown to be safe, feasible and oncologically sound for both early and advanced stage NSCLC. Whether the patient has a large tumor, nodal positive disease or received neoadjuvant treatment, VATS lobectomy may be offered to the patient if it is technically appropriate. As our cumulative experience with both VATS and robotic-assisted approaches increases, so does our ability to provide an adequate and thorough mediastinal and hilar lymph node dissection. It is essential that we as thoracic surgeons continue to push ourselves and embrace minimally invasive techniques, with the goal of offering to our lung cancer patients the best oncologic resection with the least amount of associated complications and recovery.