Video-assisted thoracoscopic surgery (VATS) is defined surgery using a video-camera without the use of rib spreading retractors through a utility incision of no more than 8 cm (1). Despite the proven benefits of VATS techniques, acceptance of VATS as a standard approach for lung resection in North America was low when assessed in 2010. In an analysis of the Society of Thoracic Surgeons (STS) database, only 37% of lung resections were performed using VATS (2).

Several VATS approaches for lung resection have been described, and resectable lung cancer has been successfully treated using 2–4 ports (multiportal VATS, M-VATS) with numerous advantages over thoracotomy including decreased hospital length of stay, decreased postoperative pain and postoperative complications, and a rapid return to daily activities with oncological outcomes that are at least equivalent to open lung resection (3-5). These advances translate into safety for the patients and increased confidence for the surgeons to perform advanced minimally invasive procedures through smaller and fewer incisions.

In 2004, Rocco and colleagues described the technique of single-incision pulmonary resection (6), and in 2010 the first uniportal lobectomy for lung cancer was reported (7). The theoretical advantages of uniportal VATS (U-VATS) over multiportal approaches include improved postoperative pain control and shortened recovery time, but objective evidence of these benefits is currently lacking. One of the main concerns expressed by opponents of U-VATS is that it limits access to the pleural cavity, which could put the patient’s safety at risk. However, published series have shown at least equivalent safety between U-VATS and M-VATS in experienced hands (8).

In January 2014, the senior author (PAU) changed her approach for minimally invasive pulmonary resections from M-VATS to upfront U-VATS regardless of the lung pathology or the complexity of the resection. In this review, we discuss the most common perioperative complications of U-VATS, describe management of these complications, and examine the outcomes in patients who underwent uniportal VATS at our institution.

All lung cancer patients undergo a complete oncological staging according to National Comprehensive Cancer Network (NCCN) guidelines (9). Patients with Stage I and II lung cancer are referred to the thoracic surgery division. U-VATS resections are performed by 1 of the 4 board-certified thoracic surgeons in our division. The procedure is executed with the patient under general anesthesia and single-lung ventilation.

The patient is positioned in full lateral decubitus with flexion of the table at the level of the mid-chest, allowing slight widening of the intercostal space to improve exposure and facilitate access to the pleural cavity. A 3–4 cm incision is made at the fifth or sixth intercostal space anterior to the axillary line. A Surgi SleeveTM wound protector (Covidien-Medtronic, Minneapolis, MN, USA) is commonly placed and used with a 5-mm camera and dedicated thoracoscopic instruments. In the majority of the patients, a chest tube is left through the working incision for drainage, but occasionally a second incision was used to tunnel the tube to the same intercostal space of the access incision. This procedure has been previously described (7,10).

VATS with the use of a high-definition camera allows an excellent view of the operative field making intrathoracic vascular accidents infrequent (11). However, technical struggles, such as cases of anatomical variations or inflammatory tissue surrounding the vessels, may increase the risk of a vascular accident. In situations like this, the surgeon should consider a prophylactic conversion to thoracotomy. Complex resections, which are increasingly performed using minimally invasive approaches in high-volume centers, have a higher risk of vascular accidents but with the help of imaging techniques like computed tomography (CT) scanning and magnetic resonance imaging (MRI), some technical difficulties can be anticipated. Despite all preventive measures, surgeons must recognize their technical limitations before confronting complex cases.

In complex cases, preventive control techniques have been described, through proximal and distal vascular mobilization and the use of vascular loops or clamps (12-14). In our experience, patients with central tumors, tumors larger than 6 cm, or who received neoadjuvant treatment are all candidates for preventive measures to isolate and control of the main pulmonary artery. Table 1 lists some maneuvers to avoid major vascular accidents.

When a vascular accident happens, the first step to control the situation is to perform direct compression over the laceration. The compression should be light, just enough to stop the bleeding. Overcompression can enlarge a vascular laceration. Once the bleeding is stopped and completely under control, the surgeon should coordinate with the anesthesiologist to keep the patient’s blood pressure as low as possible. This will decrease the tension and pressure on the artery. Before making any major decisions about definitive repair, it is advisable to understand the extent of the laceration. Then, you can develop a plan and proceed to the repair, together with your team. It seems simple and obvious, but unfortunately during the stressful minutes after a vascular accident has occurred, things can get out of control and we can be victims of unconscious actions.

Minor bleeding will stop after 5 minutes of compression. When the source of bleeding is a vessel ≤5 mm in diameter, it is possible to use energy devices, surgical clips or sealants for repair. Before proceeding to any repair, optimize the exposure to avoid losing control of the bleeding site. Lacerations in a main artery or vein demand a surgical repair, performed either minimally invasively or after conversion to thoracotomy. After these accidents, the surgeon must carefully analyze every step necessary to achieve complete vascular control and a definitive repair. Can the vascular control be obtained just by compression or should the vessel be clamped? Should the repair be done minimally invasively or by thoracotomy? A central arterial laceration demands proximal and distal control. If the artery was previously dissected, the surgeon can rapidly achieve his or her goal. However, if a dissection is necessary during arterial compression, any movement can displace the compression and restart the bleeding. Additionally, the thoracotomy should be performed without life-threating bleeding. Expert surgeons learn to control the majority of vascular accidents through VATS, and more importantly, learn when and at what point a conversion to thoracotomy should occur (15). Fortunately, with experience, the rate of accidents and the rate of conversion decreases (10).

Prolonged air leak is the most prevalent postoperative complication in lung surgery, regardless of whether it is performed through minimally invasive or open approaches (11,13). Prolonged air leaks increase hospital length of stay and decrease postoperative quality of live due the need to keep the chest tube in place.

Technical dexterity and knowledge of the equipment can help prevent prolonged air leaks. In academic centers with training programs, improper manipulation of the residual lung by a trainee is common, which may be reflected higher rates of postoperative air leaks. During surgery, the basic rules to prevent a prolonged air leak are to avoid overmanipulation of the residual lung and to select the appropriate staple size according to the lung thickness in the parenchymal resection. At the end of the procedure, as the lung is inflated, the staple lines should be well visualized and checked for air leaks. We routinely ask the anesthesiologist to measure the air leak in the ventilator, which helps to correlate its volume with the need for intervention (14).

In general, parenchymal lacerations far from the hilum can be sutured or stapled. Air leaks over the staple line can be managed with sealants. When an air leak is next to a central vessel and does not resolve with sealants we generally adopt conservative management. However, if the anesthesiologist is unable to properly ventilate the patient, a surgical repair must be performed. Unfortunately, this is strictly empirical and, to my knowledge, there is neither a standard measurement of air leak nor a volume that is considered an acceptable threshold to proceed with conservative measures.

Conversion to M-VATS or an open procedure

Elective conversion to open surgery should never be considered as a failure of VATS but rather as a form of ensuring the safety of the patient and a way to anticipate major complications (16). Yet, in the case of a vascular accident, all the staff in the operating room should be alerted and ready to manage the situation. In fact, with appropriate synchrony and efficiency, the surgeon will be able to properly stop the bleeding and convert to thoracotomy if needed. 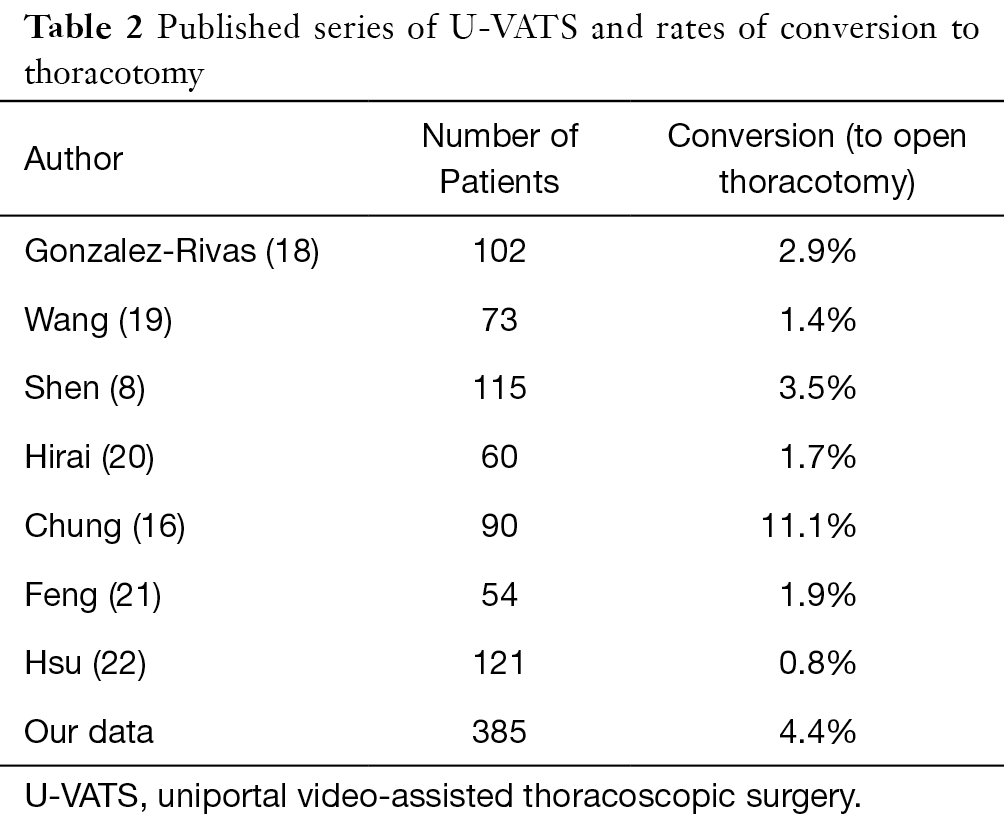 From January 2014 through June 2017, 385 patients underwent anatomic lung resection by U-VATS at our institution, tertiary-referral teaching hospital. The procedures included 300 lobectomies or bilobectomies, 71 segmentectomies and 14 pneumonectomies (Table 3). For the purpose of this study, perioperative complications were classified as vascular, parenchymal, technical, and other.

During the 385 surgeries performed over the study period, 30 patients (7.8%) had 31 intraoperative complications (Table 4). Nine of these patients (2.3%) had vascular accidents, 19 patients (4.9%) had parenchymal laceration and 2 patients (0.5%) had technical complications including the ligation of a lower-lobe segmental arterial branch in an upper lobectomy and a middle-lobe wedge resection after right-upper lobectomy due to inadequate lung expansion. Finally, one patient had a reintervention to remove a retained foreign object detected while still in the operating room. There was no intraoperative mortality, and the 30-day postoperative mortality was 0.5% (2 patients). Both of these patients developed bronchopleural fistula and acute respiratory distress syndrome (ARDS). The median length of stay after surgery for the entire cohort was 4 days (range, 1–56 days).

Five of the 9 patients who had vascular accidents required a conversion to thoracotomy. All 5 patients had massive bleeding (1.16 to 3.25 L). The injured vessel was a branch of the pulmonary artery in 4 patients and the main pulmonary artery in 1 patient. In the remaining 4 patients, vascular accidents were managed using minimally invasive techniques—angiography, compression and sealant, or stapling as part of an inferior lobectomy. When conversion to thoracotomy was avoided, blood loss was significantly lower (400 to 650 mL).

Nineteen patients had parenchymal laceration in the remaining lung during the procedure, and all of them required an intervention. Most were identified at the end of the procedure during the lung inflation. Sutures, staples, and sealants were the traditional management options.

In our cohort of 385 patients with a planned U-VATS anatomic lung resection, 16 patients (4.2%) needed one additional port placed to complete the procedure, and 17 patients (4.4%) were converted to thoracotomy (Figure 1). As discussed above, 5 patients (1.3%) had vascular accidents that required a conversion to thoracotomy. All other conversions were performed either because of technical difficulties or to achieve oncological complete resection that was not considered feasible by VATS (Figure 2). The median length of hospital stay was 8 days (5–32 days) in patients who required conversion to thoracotomy. 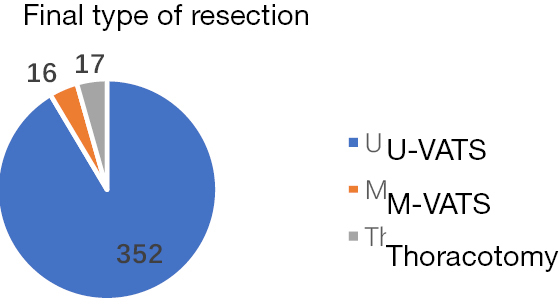 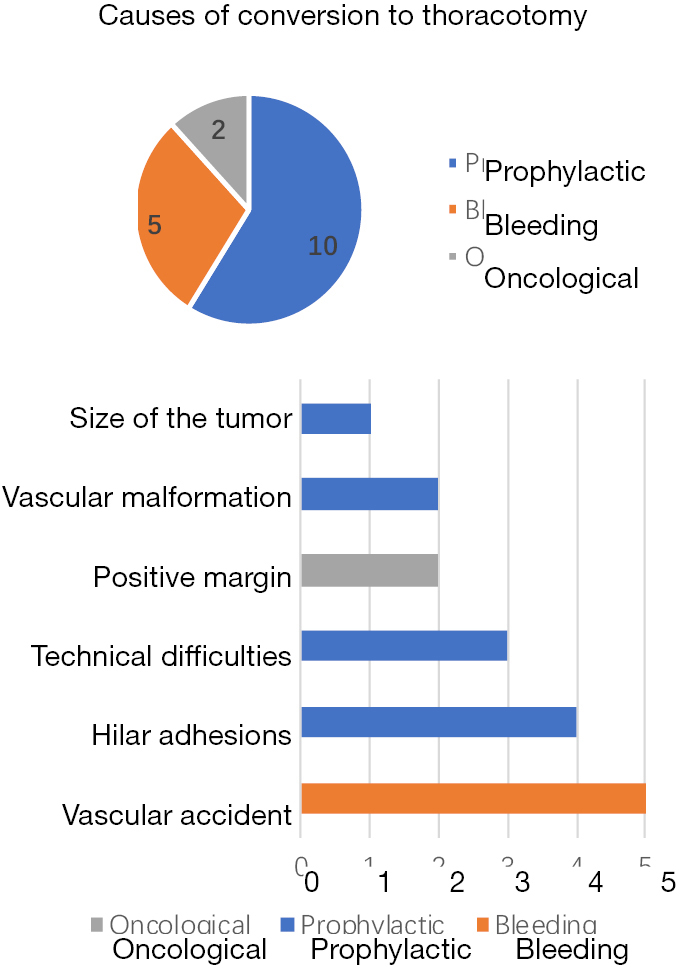 Figure 2 Cause of conversion to thoracotomy.

Uniportal video-assisted thoracoscopic anatomic resection is a new, minimally invasive approach to lung cancer. It is a feasible and safe procedure with good perioperative results, especially when performed by experienced surgeons. In our series, the incidence of catastrophic intraoperative complications during U-VATS was low, and did not result in intraoperative mortality. These patients, however, had longer length of hospital stay. Adequate patient selection, proper management of the lung and vessels and most of all, preventive measures during complex cases, can render the procedure safe and uneventful.