Video-assisted thoracoscopic surgery (VATS) has been introduced into clinical practice as of the early 1990’s but, to the purpose of certification, credentialing or privilege seeking, may still be considered a new technique (1). In fact, the evolution of the VATS technique into a VATS philosophy, with the multiple interpretations of the thoracoscopic approach to the chest as well the modifications of the anesthetic management, has made VATS an ever changing approach with many surgeons experiencing difficulties at staying abreast of all possible innovations in order to translate them into clinical practice (Table 1). Certification in thoracic surgery becomes of significant relevance especially when the number of certified thoracic surgeons practicing in the thoracic surgical unit has been proved to be one of the factors, along with volume of procedures, that may play a crucial role in determining improved mortality rates after pulmonary resection (2). 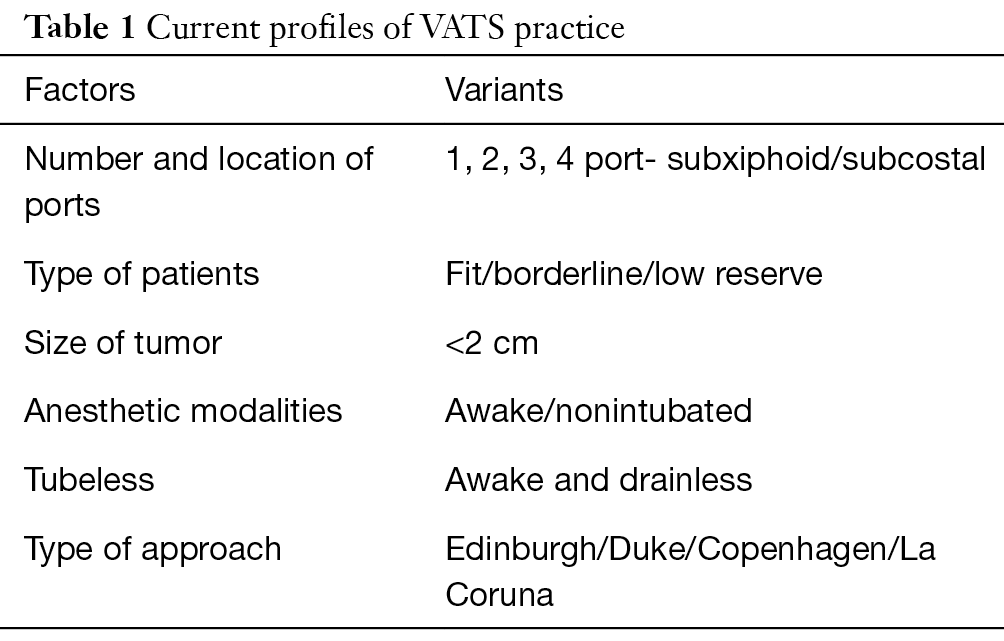 This paper deals with the pathways of certification, credentialing or privilege seeking—outside the standard environment of the residency programs—that a surgeon can select in order to proficiently practice VATS with special consideration to VATS lobectomy.

The process of certification

In order for a surgeon to be able to practice a new technique resulting from the introduction of new technology (like VATS), he or she needs to be certified in the specific specialty and acquire credentialing and/or seek privileges to perform that particular procedure at a local institutional level (3). The latter combination of processes is predominantly relevant in the United States whereas, in Europe, the issue of credentialing/privilege seeking is virtually nonexistent and the national specialty training programs are the sole responsible for certification (3). In this setting, in order for a thoracic unit to be qualified in Europe, at least the Chief Thoracic Surgeon should be certified by the European Union of Medical Specialists (UEMS)-European Board of Thoracic Surgery (EBTS) (3). Nevertheless, the EBTS certification does not focus on the possession of VATS skill set.

Blackmon and colleagues have identified two distinct pathways for credentialing in thoracic surgical procedures in the United States (1). The first, relates to the possibility of expanding the thoracic surgeon’s skill set with existing procedures to which he/she had not been exposed to during training (1). Not surprisingly, given the still existing variability of practice worldwide, VATS is among these procedures (1,4). The second scenario relates to the procedures which are not considered germane to the American Board of Thoracic Surgery (ABTS) defined skill set but in which thoracic surgeons may play a “clinical leadership role”—stereotactic body radiotherapy (SBRT) is a fulgid example of such procedures (1).

At a national or international level, a series of intertwining factors needs to be considered when the process of the certification is structured (Figure 1). These are relevant to the candidate, the tutor, the certifying institution and the certifying body. In addition, the current status of refinement of the available technology sets the timing for a change in the certification strategies and its complexity. In this setting, certification in VATS surgery is a clear example. The existence of different VATS approaches has made learning VATS a multifaceted undertaking depending on the institution where the training curriculum is taking place. In fact, the likelihood of being exposed to all aspects of VATS at the same time in one center can be limited and, therefore, the volume of cases per single procedure may not be sufficient for the trainee to complete the curriculum. Reportedly, some of the highest volume VATS surgeons in the world tend to accumulate experience with one procedure (5); when a different operative strategy is adopted, they tend to gradually shift their entire volume on the new procedure in order to rapidly develop a significant expertise. 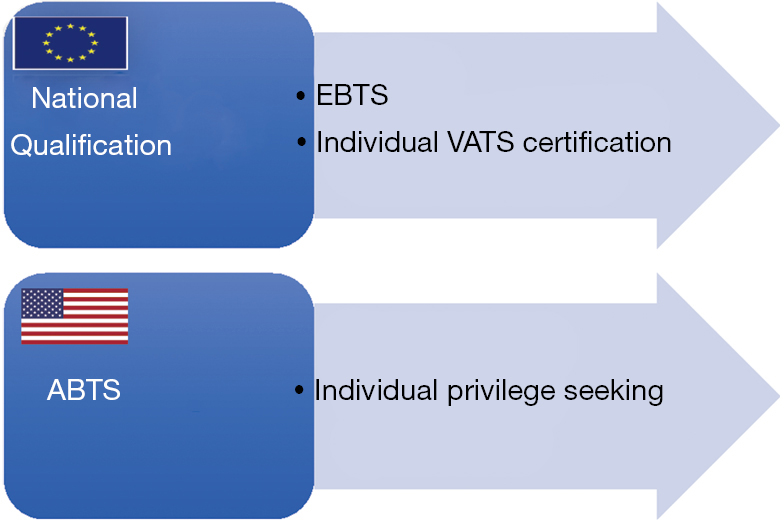 Figure 1 Current certification process in VATS. In the US, exposure to VATS training is ensured during residency training leading to ABTS certification. As to the non ABTS defined skill sets, surgeons sre subjected to individual privilege seeking with the affiliated institution. In Europe, VATS training is variably included in the National Qualification Residency Programs in thoracic surgery which is a necessary condition to obtain the European Board of Thoracic Surgery Certification. Surgeons have access to extracurricular VATS activities. ABTS, the American Board of Thoracic Surgery.

The controversy still exists as to whether adequate certification in VATS surgery requires a substantial curriculum demonstrating sufficient exposure to the basics of open thoracic surgery (4,6). Recently, the suggestion that proficient VATS surgeons can be trained irrespective of their open experience appeared in a best evidence paper (7). However, experience with conventional three-port VATS is found to be necessary when the development of an uniportal expertise is considered (8). Beyond their original surgical residency programs, subsequent fellowships in minimally invasive thoracic surgery and ad hoc VATS courses, young trainees usually come across several other opportunities to be exposed to VATS, including animal or cadaver labs and simulation theatres (9-11). On the other hand, established (i.e., more than 10 years in independent practice) consultants derive their VATS skill set from observing a proficient VATS surgeon, reading the technical lecture, rarely being mentored by a surgeon in the same staff, and, most importantly, by trial and error (9,12). In a survey on VATS exposure conducted among residents, CT residency and mentoring received from same staff surgeons were the VATS training modalities perceived as most useful to learn the technique (9). In this context, the assessment of proficiency in VATS can be defined through established protocols and theoretical tests which can support the certification process (13). Senior consultants approaching VATS major pulmonary resections could also benefit in the learning curve from a standardized self assessment of performance based on well recognized skill improvement criteria (12).

In the context of a focused professional practice evaluation, five levels of competence are functional to the credentialing/privilege seeking process (1). This pathway is developed on a series of learning steps characterized by an increasing level of supervision, from the attendance to a specific course without learning verification to the supervised performance of clinical procedures (1). One definitive advantage of such classification lies into the possibility of agreeing on a common terminology and steps on the sequence of the multilevel learning curve necessary to be granted privileges (1).

This author believes that another potential advantage of implementing this supervised learning pathway consists in the ability for several institutions to contribute to this process with their best educational offer. In other words, in a structured educational network centered on major academic centers, district and community hospitals could provide levels 1 to 3 while government-ruled institutions dedicated to patient care could contribute to the educational pathway by covering level 4 of the supervised learning curve. Accordingly, exposure to VATS training with the attendant certification would be based on significant volumes and multileveled quality thanks to the participation of different institutions and hospitals in the same training district. This distribution of training activities would in turn demonstrate the absolute value of educational networking involving all types of health care providers. Moreover, in Europe, irrespective of the institutional affiliation, each unit should comply with the criteria for structuring and qualification of thoracic surgery already published in 2014 (3). The observance of these criteria is somehow propedeutic for thoracic surgical units to deliver homogenous surgical treatment characterized by comparable outcomes.

There is no doubt that certifying bodies around the world are focusing on ensuring continuous professional development according to stringent quality criteria. In this context, the implementation of national and/or international surgical databases allows for the definition of risk scores aiming at performance stratification (14,15). In addition, the stipulation of intersocietal agreements on common training curricula will clarify standing issues and dissipate the existing gray zones by defining who does what, when and for which indications (16,17). Accordingly, certification in VATS will be soon become an agreed, structured, internationally recognized process integrated in a multidisciplinary training/credentialing pathway aimed at assessing competency as a specific individual trait (18). In this setting, the European Society of Thoracic Surgeons has been functional to create the foundations of a comprehensive educational platform dedicated to thoracic surgeons worldwide (19). Currently, this platform already includes several VATS courses, the completion of which can be recognized to the purpose of obtaining EBTS certification or as stand alone ESTS sponsored certificate of proficiency in VATS.

Interesting perspectives are lining up at the horizon of the process of certification in VATS surgery, all aiming at defining a shared multileveled curriculum worldwide (1). In this setting, essential components of VATS training are being revised with the increasing availability of advanced simulators (20). In addition, more objectives methods for determining proficiency in VATS and a greater attention to non technical factors crucial to efficiency of the VATS practice have been developed in order to make this minimally invasive thoracic surgery technique more standardized, teachable and diffused for the supreme benefit of our patients (21,22).