Surgical resection is the best treatment option for patients with early-stage and locally advanced non-small cell lung cancer (NSCLC) (1). Complete surgical resection provides the best outcome for cure (2). Microscopically, positivity of the bronchial stump is associated with higher recurrence and worse survival rates (3). Tumours involving or close to the proximal lobar bronchi may be a potential problem in minimally invasive resection of the lung. Compared with stapling, in tumours involving the proximal bronchi or lobar orifices, cutting the bronchus without stapling and primary suture closure may provide a wider surgical margin. Generally, pneumonectomy or bilobectomy are not alternative for obtaining optimal margins for more centrally located tumours because these may be managed with sleeve resections, which were shown to provide better early and late outcomes (4).

The frequency with which bronchial and arterial sleeve resections are performed for the treatment of centrally located lung cancers and other appropriate cases has increased with extended indications over the years to avoid the complications involved in pneumonectomy (5,6). These indications are a centrally located distinct malignancy, intraluminal tumour infiltrations of peribronchial or extrabronchial areas and invasive involvement of lymph nodes (N1) of these areas (6). Suitably located endobronchial carcinoid tumours or benign lesions such as endobronchial hamartomas are defined as other indications for bronchial sleeve resection (7,8).

Robotic sleeve resection was first used in a human cadaver in 2006 (10). Since then, this procedure has been performed in several centres including ours (11,12). As the indications have expanded, the short-term results demonstrate that robotic sleeve resections are technically feasible, complete resection is possible and perioperative outcomes are acceptable (13).

The aim of this study was to analyse the results of bronchial management without stapler but via the da Vinci robot system in our centre.

This study was designed as a retrospective analysis of a prospectively recorded database. The database included indications, perioperative characteristics (such as operation technique, docking time, operation duration, conversion to open and major intraoperative event) and early postoperative outcomes (length of hospital stay, duration of drainage, air leak and other complications) of cases.

We started doing robotic lung resections in 2011. In total, 296 patients were operated with robot-assisted videothoracoscopy; 203 of them underwent anatomical lung resections including segmentectomies, lobectomies and pneumonectomies. Staplers (Ethicon Endo-Surgery, Inc., Cincinnati, OH, USA or Covidien; Medtronic, Mansfield, MA, USA) were routinely used for bronchial closure in all these cases with the exception of nine patients. The indications, techniques, suture materials, pathology reports, intraoperative events and postoperative outcomes in these nine patients were investigated.

General anaesthesia was performed in supine position and a double lumen tube was inserted. Selective left bronchial intubation with fibre-optic bronchoscopy was performed in all patients; subsequently the patients were positioned in the lateral decubitus position agreeing with the location of the tumour. We routinely controlled the position of the endotracheal tubes by bronchoscopy after positioning the patient.

After inserting the ports, the robot was docked. We performed the approach using the three-arm video-assisted thoracic surgery (VATS)-based technique described elsewhere (14). The anterior arm was inserted through a utility incision (Figure 1). The four-arm VATS-based approach was used only in one patient who underwent isolated bronchial resection. The use of V-loc sutures was preferred in the last six cases (Figure 2). As a rule, a prostate bulldog clamp was used to stabilize the first suture (Figure 3). We routinely covered the anastomosis or suture line with pleura, pericardial fatty tissue or rarely with thymus (Figure 4).

Figure 1 Positions of trocars and robot-arms. 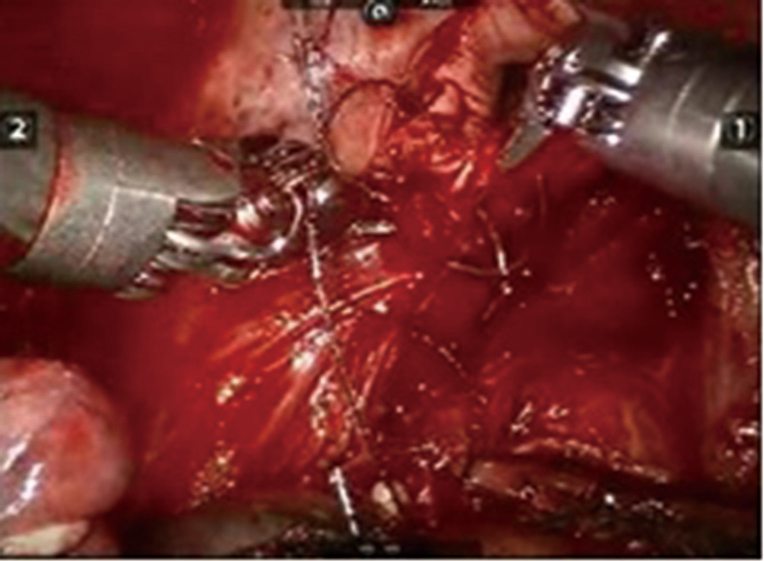 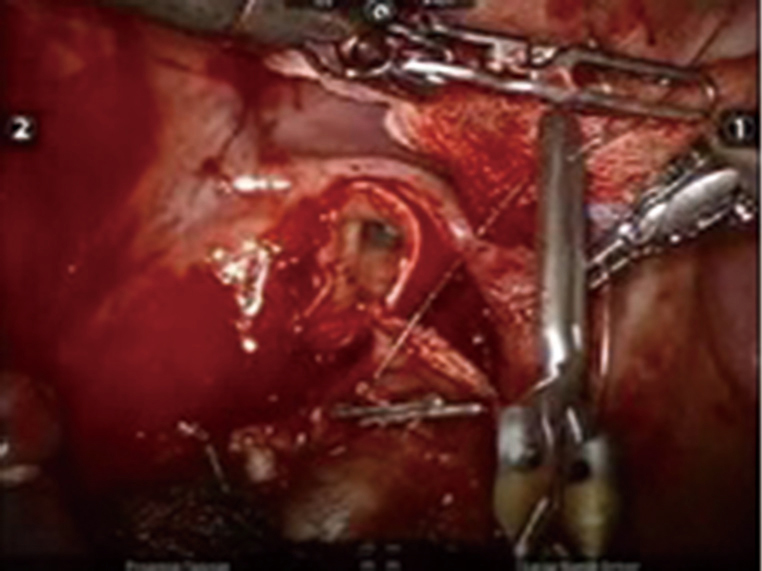 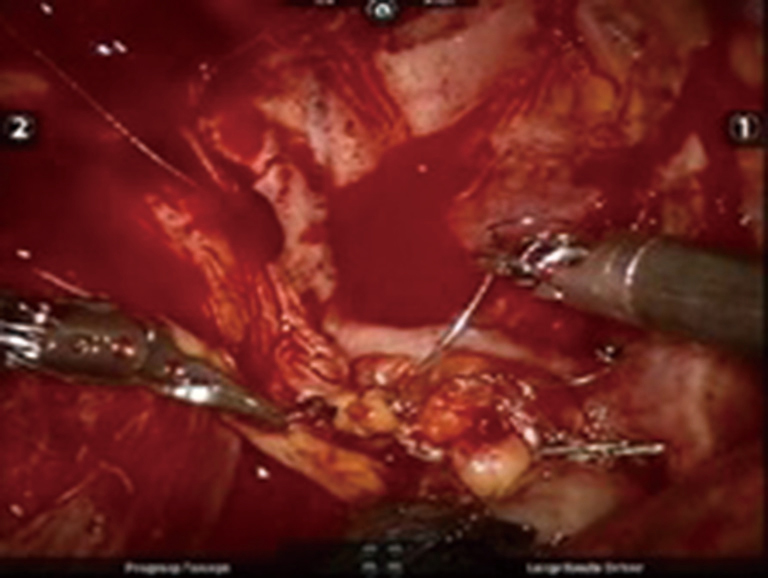 Figure 4 After covering the bronchus with pleura.

Preoperative variables were analysed included patient demographics (age, gender, indication, localization of tumour). Before the operation, all images from each patient [computed tomography (CT), positron emission tomography (PET)-CT] were examined in detail in consultation with the radiology team. Docking time, total operation time and the amount of bleeding were recorded as intraoperative outcomes. In addition, details of the operation and the suture techniques were logged. The documented postoperative variables included duration of drainage, length of stay in hospital and postoperative complications.

Three women and six men were included in the study. The median age at operation was 54.75 years (range, 19–74 years). The tumours were located in the right upper lobe in three cases, in the right lower lobe in four cases and in the left lower lobe in two cases. The pathology reports classified two cases as squamous cell cancer, three as adenocarcinoma, two as carcinoid tumour, one as small-cell lung cancer and one as endobronchial hamartoma.

The three-arm VATS-based approach was used in all cases except one (a carcinoid tumour that was located in the left lower lobe bronchus). The mean docking time was 16.3±5.8 min (range, 10–25 min) and the mean duration of operation was 101.1±24.2 min in this series.

A surgical blade and scissors were used by the console surgeon joining the table to cut the bronchus. Surgical margins were evaluated by frozen-section analysis. Primary suture closure after cutting the bronchus was performed in three cases. Two right upper sleeve lobectomies and, two right lower sleeve lobectomies were performed. The reasons for sleeve anastomosis were positive margins (n=4) or positive and invasive peribronchial lymph nodes (n=1). Tumours were located endobronchially in four cases. Two cases were carcinoid tumours in the left lower lobe. In one case, lower sleeve lobectomy was performed because of the smaller distance between the tumour and bronchial margin; we performed bronchotomy because of an endobronchial tumour in another case.

There were three primary suture closures, one isolated bronchotomy plus bronchial closure and five bronchial sleeve resections plus anastomosis in our series. Prolene sutures were preferred for bronchial management at first (n=3), but in recent years V-loc sutures (3-0) were used because of technical advantages such as the avoidance of retrograde slippage of the wound’s suture where the tension is greater; in addition, tying a knot is not necessary in case a problem occurs during suturing.

The duration of postoperative drainage was 3.6±1 days in our series. There were no postoperative complications except in one patient who underwent left lower sleeve lobectomy. He had Acinetobacter baumannii pneumonia in the second week postoperatively and was readmitted because of infection. The mean length of stay in hospital was 6.2±1.6 days; the median follow-up was 22 months. Pathologically complete resection was achieved in all cases. Yet; no recurrences were recorded in any patient, three of them received adjuvant chemotherapy only and one received adjuvant chemoradiotherapy (Table 1).

Minimally invasive robotic surgical techniques are one of the most recent advances in surgery. Robot-assisted videothoracoscopic surgery has superiorities such as better flexibility due to EndoWrist instruments, more intuitive movements and high-definition three-dimensional vision compared with video-assisted thoracoscopic surgery (15). With these developments, many surgical manoeuvres become possible (16,17). Robot-assisted thoracic surgery (RATS) may provide better technical capabilities in the thoracic cavity compared to VATS. This may make it technically easier to perform complex surgical procedures such as sleeve lobectomy or bronchoplasty for locally advanced lung cancers (18).

Another result of the higher technical capability is the manoeuvrability of the robot, which is useful in dissecting the lymph nodes. The robot-assisted surgical system allows the adequate assessment of not only the mediastinal lymph nodes but also of the interlobar and peribronchial lymph nodes (19). Veronesi et al. reported that the similar number of lymph nodes is removed in RATS as in conventional thoracotomies (20). In addition, we have shown that more lymph nodes could be dissected with robot-assisted surgery than in open surgery and videothoracoscopy (21). To be specific, the dissection of hilar lymph nodes is comparable but significantly more lymph nodes at levels 11 and 12 are dissected in the RATS group than in the VATS and thoracotomy groups according to our experience. We believe that especially the difference in level N1 is due to the higher rate of segmentectomy operations in our robotic resection series. We also dissect the level-12 lymph nodes to make a proper dissection plane when performing segmentectomy.

For proper bronchial management with robotic surgery, lymph node dissection around the lobar and main bronchi is crucial. Frozen-section analysis of these lymph nodes may provide better knowledge for an oncologically safe operation. Thus, we believe lymph node dissection is the main criterion in technically proper minimally invasive surgery, in addition to completely clear surgical margins.

Some surgeons prefer three- or four-arm robot-assisted thoracoscopy with a utility incision, whereas others prefer complete portal robotic surgery (15,22). Insufflation with CO2 provides pneumothorax and sufficient exposure in the latter technique (23). We prefer the three-arm robot-assisted videothoracoscopically-based surgical technique, and the differences between the two techniques are described in a study of one of us (14). We use a bulldog prostate clamp to stabilize the first suture of a sleeve anastomosis, which makes the procedure easier and allows the operation time to be shorter.

Most important reason of high costs of robotic surgery is longer operation times. Veronesi et al. specified that duration of operation was higher than muscle-sparing thoracotomy group, but for robotic resections after the first period of their series operation time was reduced significantly. Mean operating time was changed 260 [152–513] to 235 [146–304] min in this study (20). A series from Canada also showed total duration of surgery decreased by 8.04±1.78 min/case until case 20 (P<0.001) and console time decreased by 6.64±1.84 min/case in first 20 cases (P=0.001) in their first tertile when they analyzed their data (28). Toker et al. showed a sharp change in the slope of the regression trendline correlated with case 14 (R2 =0.72) in the learning curve at docking. The console time changed in the slope of the regression trendline, in the learning curve is 13 patients (R2 =0.41) at console. Also the total operating time decreased in 14 patients (R2 =0.57) in this study (29).

Indications for robotic thoracic surgery are increasing day by day. We have demonstrated that bronchial management procedures such as bronchial sleeve resection or isolated bronchial resection and primary closures are feasible and safe methods in robot-assisted VATS-based surgery.

Ethical Statement: Because of this is a retrospective archive study, we didn’t need ethics approval.