Bilateral VATS thymectomy in the treatment of myasthenia gravis

Myasthenia gravis (MG) is an autoimmune disorder characterized by skeletal muscle weakness, most commonly due to antibodies directed against acetylcholine receptors. The thymus is an immunogenic organ located in the anterior mediastinum and believed to be key to the pathogenesis of MG as a location of origin of these autoantibodies. Thymic abnormalities are prevalent in patients with MG; approximately 70% of patients have thymic hyperplasia and 15% have thymomas (thymic epithelial cell tumors that tend to be slow growing but have the potential to become invasive) (1).

Though still a source of debate, thymectomy is indicated for patients with myasthenia gravis with a thymoma and in non-thymomatous MG associated with certain autoantibodies (2,3). The purpose of thymectomy is to remove as much thymic tissue as possible in order to achieve remission and prevent tumor invasion in the setting of thymomas. However, the benefit of thymectomy for symptom remission is not immediate and may not be achieved until 5 to 10 years after surgery (4).

A number of issues regarding thymectomy in myasthenia gravis remain unresolved, including optimal surgical approach. The purpose of this paper is to provide an overview of bilateral video-assisted thoracic surgery (VATS) thymectomy in patients with myasthenia gravis, including a review of anatomic considerations, surgical technique, and evaluation of operative risk and disease outcomes in comparison to alternative methods of resection.

The thymus is a butterfly-shaped gland located in the anterior mediastinum. It reaches its maximal weight of approximately 30 to 40 gm during puberty, but subsequently involutes and eventually weighs between 20 to 28 gm in the normal adult. It is thought to be composed of multiple lobules, but typically maintains a distinct right and left bi-lobar shape. The upper left and right poles usually lie anterior to the brachiocephalic veins and have fibrous thyrothymic attachments at their superior ends. However, the thymic horns may be found under the brachiocephalic vein. The superior poles of the thymus may lie in close proximity to the recurrent laryngeal nerves as they course in the tracheoesophageal grooves. Inferiorly, the thymic lobules rest on the anterior aspect of the pericardium. The phrenic nerves run laterally to the thymus in the anterior mediastinum; thymic tissue may extend deep to these nerves, resting on the pericardium (5). Importantly, extracapsular islands of thymic tissue are found embedded in peri-thymic fat throughout the mediastinum and neck. Ectopic thymic tissue was found in the mediastinum and cervical neck in 98% and 32% of thymectomy specimens, respectively (6).

Arterial blood supply to the thymus is primarily derived from branches of the internal mammary arteries, but superior portions may also be supplied by branches of the inferior thyroid arteries. Venous drainage is predominantly achieved via a large draining vein on the posterior side of the thymus that enters the left brachiocephalic vein.

The goal of thymectomy in MG is to remove as much thymic tissue as is safely possible so as to reduce the number of immunogenic thymic cells responsible for the production of pathogenic antibodies, as well as achieving complete mass resection in cases associated with a thymoma. Care is taken to avoid directly grasping thymic tissue so as to reduce the risk of capsular disruption and spillage of thymic tissue. Thus, a “touch-free” approach is utilized throughout the operation, in which only peri-thymic tissue is grasped during the dissection. Capsular transgression of a thymoma should be considered a never event in any surgical approach.

Patient is placed in the supine position and prepped such that both left and right sides may be accessed. The left side is accessed first with the left arm extended overhead. Once the left-sided portion of the operation is complete, the left arm is lower and the right arm extended, all while maintaining a sterile field. This avoids any brachial plexopathy from positioning. Additionally, the head is flexed so as to move the thymus inferiorly out of the cervical neck.

Three 5mm ports are placed on each side and 8 to 10 mmHg is used for insufflation. The initial port is placed in the mid-axillary line 2–3 ribs inferior to the inframammary crease, permitting direct visualization of the placement of the caudal-most port, located at the mid-axillary line at the level of the insertion of the diaphragm. The location of this second port facilitates dissection of mediastinal fat and allows for improved access to the cervical neck superior to the brachiocephalic vessels. The third port is placed is placed laterally and mid-way between the initial two. 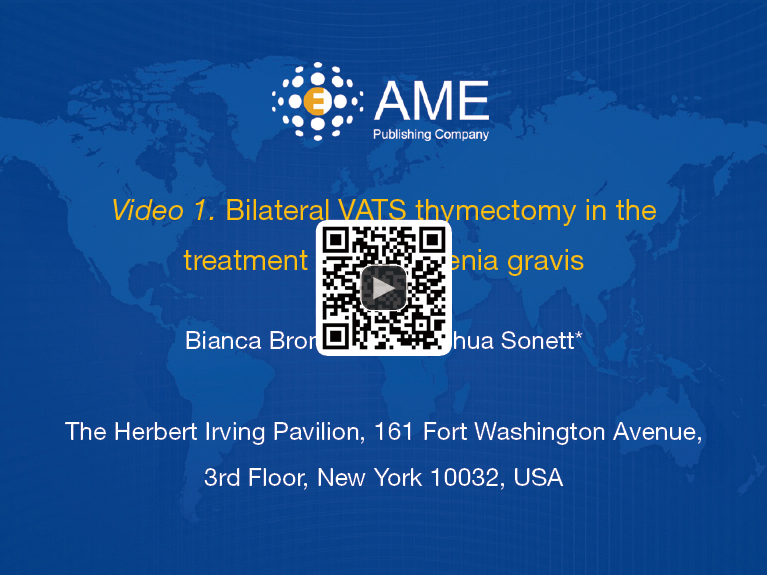 Thymic tissue is dissected free from attachments to the diaphragm inferiorly, sternum anteriorly and pericardium posteriorly until the right lung is visualized. Dissection is extended until the left internal mammary vein is identified and traced until it enters the inferior aspect of the left brachiocephalic vein.

The left phrenic nerve should be visualized coursing on along the left lateral aspect of the pericardium; visceral pleural overlying the nerve is incised and thymic and peri-thymic tissue are resected deep to the phrenic nerve.

Dissection is then continued superiorly into the cervical neck until the thyrothymic ligaments are freed. Given the location of the thymic horn adjacent to the tracheoesophageal groove, care is taken to avoid injury to the recurrent laryngeal nerve, which runs in the same location. Additionally, inferior thyroid veins draining into the brachiocephalic vein may be identified and ligated.

Step 5: Release from right phrenic nerve and removal of specimen

The right anterior mediastinum in then accessed. The right phrenic nerve is freed in a similar manner to the left. Any thymic and peri-thymic tissue deep to the right phrenic nerve is dissected. Dissection is continued superiorly along the right internal mammary artery and vein while freeing and remaining thymic tissue. The thymus is placed in a bag and removed from the thoracic cavity.

As the goal of surgery in myasthenia gravis is to remove as much immunogenic thymic tissue as possible, the ideal thymectomy would maximize access to both the encapsulated thymus and ectopic islets of thymic tissue throughout the mediastinum and cervical neck while minimizing operative risks, recovery time, and postoperative pain.

A thymectomy classification system was developed by the Myasthenia Gravis Task Force in order to differentiate the variety of approaches that exist in practice (8). The basic transcervical approach (T-1a) is thought to provide inadequate exposure and sub-optimal remission rates, though more tissue may be resected with “extended” transcervical techniques (T-1b-d). Open transsternal approaches vary in the amount of thymic tissue estimated to be resected, ranging from 70–80% of thymic tissue resected during a “standard” transsternal resection of the lobular thymus (T-3a), to 98–100% of thymic tissue removed with a combined transcervical-transsternal approach (T-4), considered to be the “maximal” exposure and benchmark operation against which others are compared. “Extended” transsternal resections (median sternotomy with additional mediastinal dissection, T-3b), are estimated to resect the bulk of thymic tissue (85–95%), though vary in the extent of mediastinal tissue removal and may sacrifice removal of cervical thymic tissue, but minimize the risks associated with cervical neck dissection (such as recurrent laryngeal nerve injury) (9,10).

While much literature exists, definitive conclusions on if there exists a best surgical approach are limited by a number of issues: lack of prospective randomized controlled trials, reliance on retrospective data, heterogeneity of patient populations (with regard to disease severity and medical treatment pre- and post-surgery), as well as lack of use of a standardized classification system for MG disease severity and definition of remission (10). Nonetheless, the remainder of the discussion will review the existing evidence comparing bilateral VATS thymectomy (and its variations) to alternative approaches with regard to safety, recovery time and efficacy in disease treatment.

Numerous studies have reported low perioperative rates of morbidity and mortality for bilateral VATS thymectomy. A number of retrospective studies have demonstrated equivalent rates adverse events and faster recovery time in patients undergoing bilateral VATS thymectomy compared to open transsternal thymectomy (both T-3b and T-4 approaches) for myasthenia gravis. While respiratory and cardiac complications (such as pneumonia, need for prolonged ventilation, and arrhythmias) are similar between the two approaches, hospital and ICU length of stay, duration of need for chest tube, estimated blood loss, and postoperative pain are reported to be significantly less in patients undergoing bilateral VATS thymectomy (11-14). Reports of mean operative time for bilateral VATS compared to transsternal thymectomy range from equivalent (11-13) to increased (14).

While Kaplan-Meier time-to-event analyses are considered the ideal method for reporting rates of remission, they are not uniformly used in outcomes studies (18). Previous reviews utilizing studies that provided remission data with Kaplan-Meier analysis suggest comparable rates of remission at 5 years between bilateral VATS with cervical dissection and combined transcervical-transsternal (T-4) thymectomy (51% and 50% respectively), though inferences are limited by differences in the severity of symptoms between the study populations prior to surgery (18-20). Though utilizing less stringent measures of rates of remission, additional retrospective studies comparing bilateral VATS with and without cervical dissection to transsternal extended thymectomy (T-3b) report similar rates of remission between open and minimally invasive approaches (14,15).

Outcomes of bilateral VATS for MG with thymoma

Both unilateral and bilateral VATS are employed with success in the resection of early stage (Masaoka stage I or II) thymomas with or without concurrent MG (12,23-25). Successful resection of stage IIIA tumors (tumors that visibly invade adjacent organs) using bilateral VATS thymectomy has also been reported (26). There are no studies that directly address the superiority of one surgical approach versus another in MG associated with thymoma (25). However, given the heterogeneity of thymomas themselves, the stage and location of the thymoma associated with MG should dictate the optimal surgical approach on a case-by-case basis.

With a recent prospective randomized controlled study demonstrating the benefit of open transsternal thymectomy in myasthenia gravis, more attention may now be directed toward which surgical approach affords equally extensive dissection while minimizing post-operative recovery and complications (3). Results from retrospective data suggest that bilateral VATS thymectomy has the capacity to achieve similar rates of remission to the “maximal” thymectomy with improved recovery time and decreased invasiveness, but randomized prospective data with follow-up greater that 5 years is needed to address the question definitively. Additionally, given recent reports of similar outcomes between bilateral and unilateral VATS, differences in thymic tissue resection in bilateral VATS with and without a transcervical approach, and successful resection of more invasive thymomas with bilateral VATS, it may be that the unique anatomy and pathology of the patient dictates the optimal approach within the spectrum of minimally invasive thymectomies. Until such data is obtained, bilateral VATS thymectomy, with or without additional transcervical dissection, remains a safe and effective technique in the treatment of myasthenia gravis.