Despite advances in lung cancer screening and early detection, a significant proportion of non-small cell lung cancer (NSCLC) patients present with advanced disease (1). Thankfully, even with loco-regionally advanced NSCLC, surgery can offer an increased chance of cure when employed as part of a multi-modality treatment plan (2). The definition of loco-regionally advanced NSCLC includes diverse presentations, including chest wall invasion, major vessel invasion, central tumor location and extensive nodal disease. This paper focuses on the surgical management of clinically apparent hilar and mediastinal nodal involvement, especially in the post-neoadjuvant therapy setting. These operations can be technically more challenging than early stage disease, with respect to dissection of the bronchovascular structures and ability to resect disease.

In the early experience with video assisted thoracic surgery (VATS) lobectomy for NSCLC, locally advanced disease was considered a contraindication (3). However, there have been increasing reports of the use of the VATS approach for many types of loco-regionally advanced NSCLC, including pneumonectomy (4), chest wall resection (5), superior vena cava resection (6), carinal and sleeve resections (6,7) and superior sulcus tumor resections (8). However, a more common use of minimally invasive surgery for loco-regional disease is in dealing with clinically apparent hilar or mediastinal adenopathy (N1/2, stage II/IIIA). VATS lobectomy has been compared against thoracotomy for stage IIIA patients following neoadjuvant chemotherapy with equivalent perioperative outcomes and a trend towards improved survival with VATS (9). Possible oncologic benefits of minimally invasive approaches include less immune derangement due to decreased inflammatory response (10) and increased delivery of adjuvant chemotherapy (11).

At Memorial Sloan Kettering Cancer Center (MSKCC), open, traditional VATS and robotic-assisted VATS approaches are all used in patients with stage II/IIIA disease following neoadjuvant therapy. Recently, the results of the robotic-assisted and traditional VATS resections were compared with the open approach over 10 years at MSKCC (12). Compared to thoracotomy, the minimally invasive group had a similar R0 resection rate, postoperative morbidity and 3-year overall and disease free survivals, with a shorter length of stay. With increasing experience with the robotic-assisted approach it has become the senior author’s preferred approach to these patients because of the benefits of improved visualization, dexterity and accuracy. A recent retrospective review of the oncologic results of robotic lobectomy for NSCLC demonstrated low operative morbidity and mortality with long term survival consistent with published results for VATS and thoracotomy (13).

Selection of patients with cII/IIIA disease for surgical resection is a complex and controversial issue, involving assessment of the extent of local and mediastinal nodal disease, underlying cardiopulmonary function and comorbidities as well as response to induction therapy. The optimal neoadjuvant therapy for IIIA NSCLC has not been defined and options include both chemotherapy and chemoradiation. At MSKCC patients are reviewed by a multidisciplinary tumor board involving thoracic surgeons, medical and radiation oncologists, pathologists and radiologists. Appropriate patients are selected for multi-modality therapy. Our most common practice is to use neoadjuvant chemotherapy prior to surgery except for certain clinical scenarios such as superior sulcus tumors where induction chemoradiotherapy has been shown to be associated with improved outcomes (14).

With regard to selecting patients with loco-regionally advanced NSCLC for robotic-assisted resection, the most important factors are the anatomy of the patient and disease. Careful review of both pre- and post-neoadjuvant imaging studies is critical to identify potential problem areas. Local hilar invasion by the primary tumor, bulky hilar or mediastinal lymphadenopathy or the presence of calcified lymph nodes should prompt serious consideration of an open approach.

Preparation of the entire surgical team is critical to success in any operation, in particular when advanced technology is involved as in robotic-assisted VATS. Our approach to training our team to perform robotic lobectomy has been previously described (15). All of the members of the multidisciplinary team in these cases should be thoracic surgery trained and familiar with both the technique of VATS lobectomy and the robotic platform being employed. As with any new technique, a learning curve for robotic lobectomy has been described (16). Surgeons must be aware of their own limitations and not to undertake these more challenging loco-regionally advanced resections until they have acquired an adequate level of robotic skill.

We preferentially employ the da Vinci Surgical System Xi robot for pulmonary resection. This system provides robotic control of three working arms and a 30 degree telescope. In general, the robot cart is brought in from posterior to the patient at approximately 90 degrees from the spine. The room set-up is depicted in Figure 1. The Si system may also be used effectively for lung resection but lacks advantages such as more flexible cart positioning, automated targeting, less need for wide spacing of robotic arms and the ability to use robotic staplers. 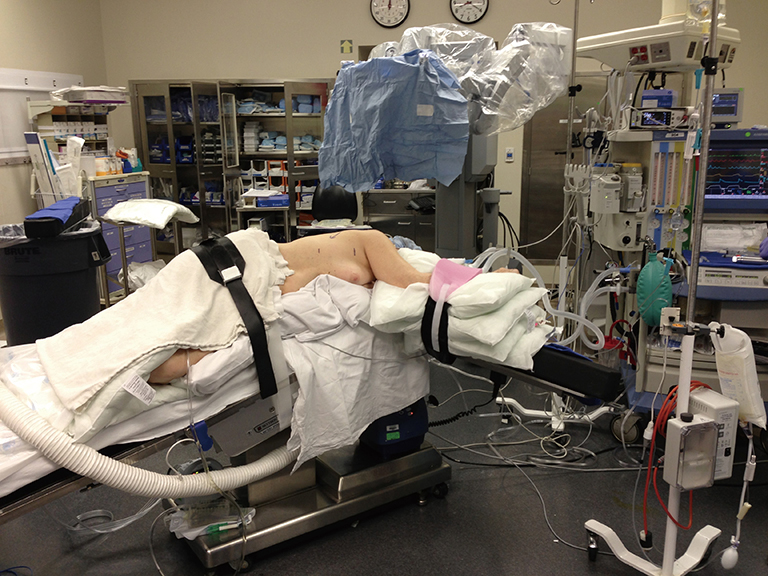 Pre-operative DVT and antibiotic prophylaxis is used as for any anatomic lung resection for cancer. We do not routinely use epidural catheters for analgesia.

The main instruments used are:

General anesthesia with single lung ventilation is employed, generally via a double-lumen endotracheal tube. The patient is positioned in the lateral decubitus position with all pressure points padded and the table flexed.

Three ports are used for robotic access, as well as a non-rib spreading utility incision (Figure 2). The camera port is placed first in the 7th or 8th intercostal space in the posterior axillary line. A 12-mm port is placed in the 9th intercostal space posteriorly for one robotic working arm and the hand-held powered or robotic stapler. An 8-mm port is placed in the 5th or 6th intercostal space posterior to the scapula for the tip-up fenestrated grasper used primarily for lung retraction. A 2.5–3 cm utility incision is placed in the 5th intercostal space at the posterior axillary line to lie over the hilum, through which the final robotic working arm is introduced. The bedside assistant can work around the port in this incision for additional retraction and suction as well as specimen retrieval; however, an additional 5-mm port placed between the camera and the access incision often allows better angles for the suction. A total portal approach has been described (17); however, we prefer this approach as it allows easy access for hemostatic control if needed and more closely approximates the traditional VATS setup allowing for easier transition by trainees and new surgeons. Furthermore, some form of access incision is required for specimen removal regardless of approach. As a general rule, the cautery spatula is controlled by the surgeon’s dominant hand and the bipolar fenestrated forceps are controlled by the non-dominant hand. We do not typically employ insufflation of the chest cavity, but it may be done with a total portal approach when increased exposure is desired. Short videos of right upper (Figure 3) and right lower (Figure 4) lobectomy after neoadjuvant therapy for nodal disease are included for reference. 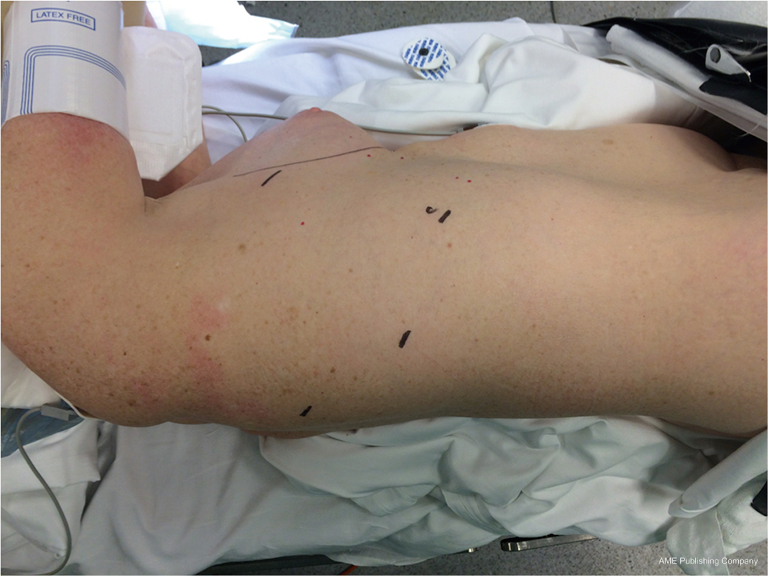 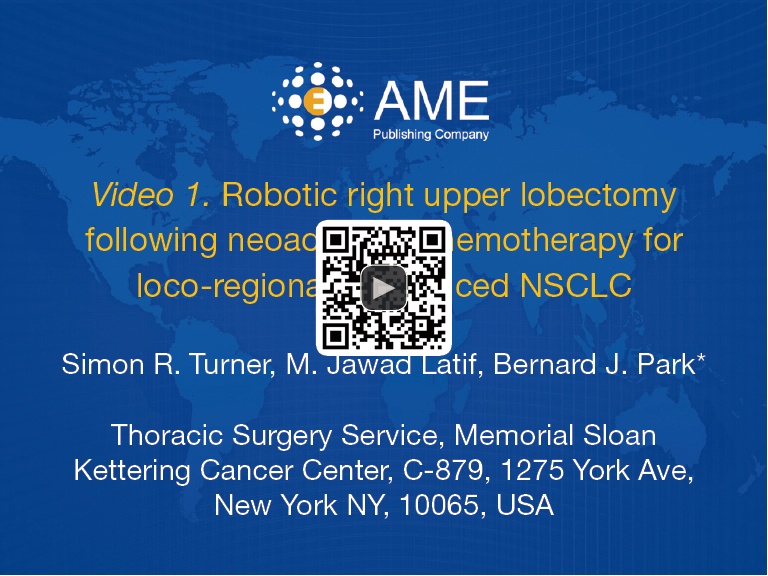 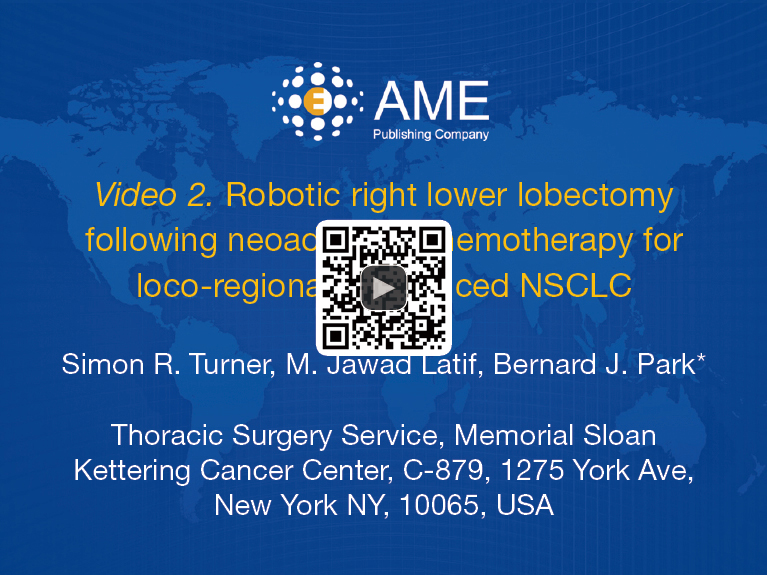 Our approach to pulmonary resection begins with a complete mediastinal lymph node dissection, and this is especially important in loco-regionally advanced disease. Thorough nodal dissection is the only way to ensure an R0 resection in this setting and also facilitates safe isolation and division of the hilar vascular and bronchial structures. Node dissection begins with division of the inferior pulmonary ligament allowing dissection of stations 8 and 9. Proceeding superiorly along the posterior hilum, stations 7 and 10 are dissected next. The lung is then retracted posteriorly and the anterior mediastinal and hilar nodes are also dissected. In loco-regionally advanced disease following induction therapy some degree of hilar and mediastinal fibrosis should be anticipated. The enhanced visualization and dexterity of the robotic approach makes the nodal dissection easier and a more complete lymph node removal may be the result, with potential oncologic benefits (20). Attention should also be paid in these patients to areas of visible lymphatic leak which may be clipped, preventing high chest tube losses in the postoperative period in these patients.

Next the hilar structures are isolated and divided. Again, the possibility of hilar fibrosis must be kept in mind, especially when dissecting the pulmonary artery. Key to safe robotic surgery is learning to rely on visual cues to judge the tension being placed on fragile tissues, as haptic feedback is lost. With experience, the improved, three-dimensional vision afforded by the robot can make up for this deficit. Flexibility with regards to the order in which hilar structures are divided is important in any lung resection, and in particular after neoadjuvant therapy where fibrosis may make approach from one angle more difficult than another. Generally, the vein is divided first, followed by the arterial branches and finally the bronchus but this order is altered as needed based on intraoperative findings. The hand-held powered stapler is used to divide most of these structures, as it provides a steadier firing platform than traditional staplers, especially when used by trainees or physician assistants at the bedside who may have less experience. It is also more cost-effective compared to the Xi robotic stapler. However, for critical structures such as the most proximal arterial branches to the upper lobes, the robotic stapler offers several advantages, such as the dexterity and degrees of freedom afforded by robotic instrumentation, as well as direct control by the operating surgeon over the passage of the stapler. We do not routinely use tissue flaps to buttress the bronchus staple line even after neoadjuvant therapy, though this can be considered on a case by case basis.

One advantage of the robotic approach to lobectomy is the ability to decrease the number of assistants needed to perform the case. Unlike in traditional VATS lobectomy where often a skilled first assistant as well as an additional camera operator are employed, in robotic lobectomy only one skilled bedside assistant is required. The role of this assistant is in exchanging robotic instruments as necessary as well as providing additional retraction, suction and removing specimens such as lymph nodes via the assistant port. This has the side-benefit of freeing up surgical trainees for educational opportunities to perform parts of the operation on a second operator console. Skilled scrub and circulating nurses or surgical technicians complete the team.

The post-operative management of patients following robotic assisted VATS lobectomy should be no different than any VATS lobectomy patient. Chest tubes are set to water seal and removed once the daily output is less than 400 cc/day, assuming it is not chylous or excessively bloody. Early ambulation, deep breathing and coughing with good pain control are essential, and are facilitated by the minimally invasive approach. Patients are often ready for discharge by the second or third postoperative day.

Patient Selection: Careful patient selection is key to success in any surgical procedure, especially in the setting of advanced disease. Patients must be appropriately screened from an oncologic point of view to ensure they are good candidates for multi-modality treatment.

In the setting of loco-regionally advanced NSCLC after neoadjuvant therapy, careful dissection of hilar structures is critical to avoid injury. Thorough mediastinal and hilar lymphadenectomy exposes vascular and bronchial structures at their branch points. Lymphadenectomy is also critical in loco-regionally advanced disease to eradicate any viable tumor and provide the best chance of cure.

Early in our experience with robotic lung resection we performed each case with two attending surgeons. However, we are fortunate to have a talented group of thoracic surgical physician assistants who have taken an interest in VATS and robotics. By providing graduated responsibility to these PAs, they have gained considerable skill in providing bedside assistance. This allows us to perform these cases with only the PA at the bedside performing tasks such as stapling the pulmonary artery branches. This means only one surgeon is needed for each case, and thoracic fellows can work at the teaching console to gain robotic skills.